Ed's note: The People's Post is on weekdays for the next three weeks at 1.45pm on Radio 4. You can catch up online for up to seven days after each episode is broadcast - PM 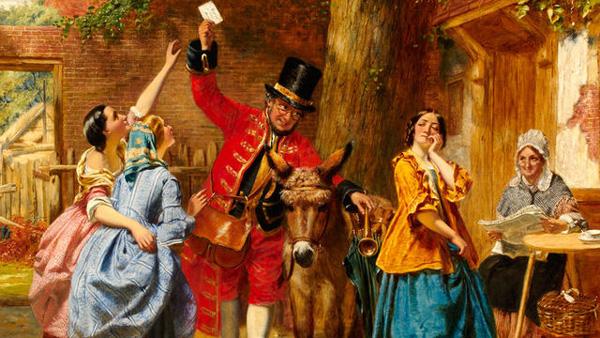 About three times a year an envelope comes through my door, addressed in familiar hand-writing.

It comes from a friend who lives in a caravan in a tiny village in North East Germany. He has no mobile phone, no internet connection and no email address, and if i want to exchange thoughts with him I've no option but to put pen to paper, find an envelope, buy a stamp and remember to post it. To be honest the whole thing feels like an enormous chore. So when my wife suggested the post office as a possible documentary idea (she later came to regret it) I couldn't honestly claim Royal Mail was a big part of my daily routine.

As a young(ish) person working in the media, with family living around the world, digital media - emails, texts, video calls on the internet are a sometimes exasperating part of everyday life. And it didn't take long to realise that for an awful lot of people, over a vast span of time, the post office meant the world, or at least the world beyond their neighbourhood.

Early in my research I discovered a new book by Susan Whyman, The Pen and The People. In it she describes how a gradually reforming postal system in the 17th and 18th centuries enabled ordinary people - labourers, sailors and merchants - to run their businesses and maintain contact with loved ones. As Ruth Followes, a Quaker preacher who travelled the country preaching the gospel, wrote in 1760:

"Dear and Loveing husband in unfeigned Love to thee and my Dear and Tender Children do I now write and although it is so ordered that wee are separated from one another ... yet I am near to you in spirrit...."

It was fascinating also to see how ordinary people addressed their letters, even when one (or both) of them had no fixed abode, and somehow they got through. A sailor's wife addressed her letter in 1697:

"Thomas Bowery on board ye St George Galley Riding in the Downs If ye ship be gone to be returned to Mrs Mary Bowery att Mr Gardiners, an apothecary Pray my dear let me hear from you for that [is] the only cumfor I have now"

For many people like Mary Bowery, sending a letter wasn't a burden but a great privilege. Furthermore it wasn't a privilege they were given, but a right that needed to be fought for, by a series of visionaries and entrepreneurs. Names like Dockwra, Palmer and Hill who introduced Penny Posts, mail coaches, and - ultimately - the very idea of public service.

Having collaborated with historian Dominic Sandbrook on the Radio 4 series, 1968 Day by Day, I knew he was fascinated by the big and small changes which have shaped British life, and after he agreed to present the series, everything else pretty much clicked into place.

The list of valued contributors is far too long to namecheck everyone here (see the credits for full details) but I will say this - There's something about the Post Office which seems to engender goodwill. Throughout the project I've been lucky to work with people as inspired by the story of the post office as I have become.

It seems that although for many of us the post means little more than bills, and the occasional letter, it retains a certain, undefinable, nostalgic affection. Discovering the source of this affection has been one of the underlying questions of the series.