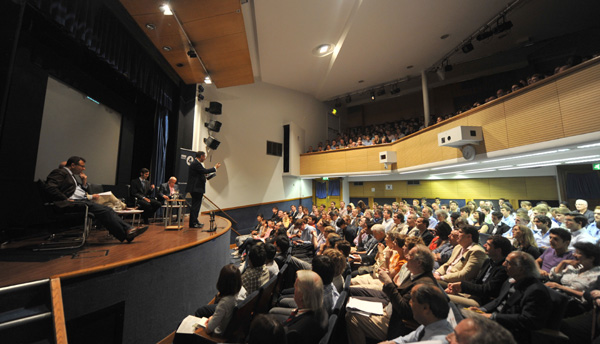 Who would have thought that one way for Radio 4 to catch the attention of a younger audience was to organise a debate about two dead economists, with a septuagenarian member of the House of Lords as the star attraction?

Last Tuesday night, around 1000 people queued around the block at the London School at Economics to attend a Radio 4 debate about the ideas of John Maynard Keynes and Freidrich August von Hayek. In the 1930s, these two giants of economic thought advocated sharply contrasting responses to the Great Depression: Keynes argued for more state intervention and Hayek for a more free market approach.

As Western economies struggle to recover from the latest slump, the ideas of Keynes and Hayek are being eagerly revisited by a younger generation. There are even two rap videos (here and here) on the Keynes v Hayek controversy.

The audience at the LSE was mainly young - I'm guessing the average age was about 23. Our presenter, Newsnight's Economics Editor Paul Mason, tested opinion before the speeches.

Team Keynes, consisting of Keynes's biographer Robert Skidelsky and economics blogger Duncan Weldon, got an enthusiastic cheer from the audience. For Hayek's defenders, Professor George Selgin and management consultant Jamie Whyte, the whooping was even louder.

"I applaud the Hayekians' eagerness to come and hear the Keynesian case," joked Lord Skidelsky.

The debate went beyond the LSE auditorium into the Twittersphere, as the audience ran a live commentary using the hashtag #lsehvk, which was followed enviously by those who were turned away at the door - a large lecture theatre and two overspill rooms still didn't provide enough seats to meet demand.

"@DuncanWeldon You were amazing at #lsehvk. Go Keynes! (I said it)," was the verdict of 20 year old Emily Finch, a film festival administrator.

It was obvious that people had come to applaud their team rather than to make up their minds.

As Lord Skidelsky emerged from the LSE Old Building, he was surrounded by fans. "I can't believe I'm actually meeting you," one awestruck young man told the peer. Afterwards, in a nearby pub, a cheer went up as Professor Selgin and Jamie Whyte arrived for a post debate celebration attended by over 100 Hayekians.

"I didn't know so many young people think economists are like rock stars," said the event's producer Daniel Tetlow.

So, what on earth is going on? Well here's my theory. If you are a 6th former or a university student, the financial crisis of 2008 is probably the defining event of your politically conscious life. Understanding how we got into the financial mess we are in, and how to get out of it, is more than an issue of intellectual curiosity for that generation.

The effects of the economic downturn are being felt more acutely by the young than they are by the typical Radio 4 listener (average age 55 and likely to have paid off the mortgage). And if last week's debate is anything to go by, the youth are demanding a return to some older and more radical thinking.