Stephen Fry's In the Beginning was the Nerd 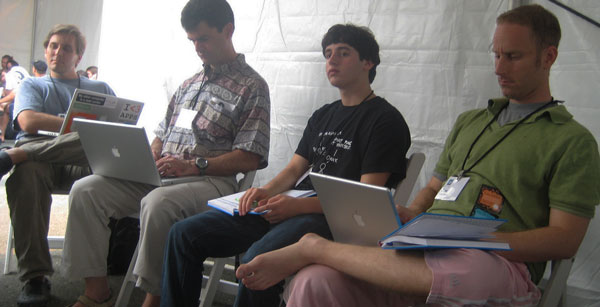 The Western world, with a few notable exceptions, poured billions of dollars into electronic pesticides to defeat the Y2K bug. Only to find that for the most part it could have been defeated by turning the systems off then on again. Shades of the hit C4 comedy The IT Crowd. In reality it's the solution put forward in Stephen Fry's Archive on Four next Saturday by Ross Anderson, Professor of Security Engineering at Cambridge University, a world authority. Here - exclusive to the blog - is the full interview Stephen conducted with Ross on the crisis that fizzled out and the prospects of a real future digital Armageddon:

So, why the silence when the bug didn't bite? The answer's in the programme. Politicians, experts and businessmen all profited in status or cash from the threat. In the media - to paraphrase the crime reporters - it bled so it led. In the USA, government brazenly claimed victory for its defeat. In reality, the enemy was almost totally imaginary. But it's useless blaming the great and the good. It was inevitable. We'd been told repeatedly that this brilliant new technology would change the world. Then we were told it could all stop on the stroke of one spookily special midnight. We were the newly addicted, suddenly faced with the prospect that our supply was fatally endangered. There was only one thing we could do. Panic. Then spend millions fixing it. Sorry, that's two things.

Nick Baker is Producer of In the Beginning was the Nerd.