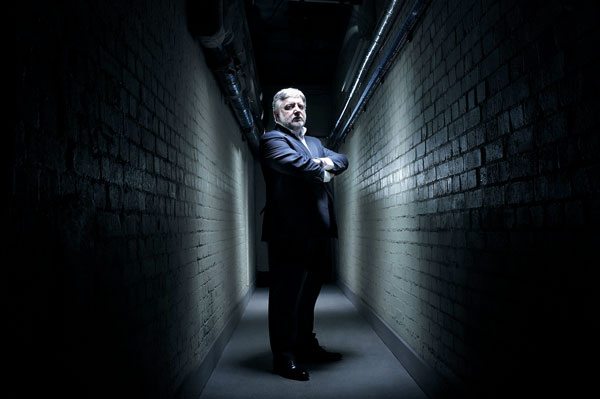 About 3 years ago, and very new to the job of Commissioning Editor for Drama for Radio 4, I was walking back from the bank to my office when my mobile rang. It was Patrick Rayner, the Head of Drama in Scotland.

"Jeremy, I know it stretches the definition of classic a bit and it is not Scottish, but what would you think of us doing one of the George Smiley trilogy as a Classic Serial?"

"It's a great idea, and it's classic enough for me." Pause "But why not do all three?" I said.

"Well we could, if you think the Network could stand that much Smiley."

"Yes I do. How many other Smiley novels are there?"

There was a comical interlude where from our collective memories we tried to remember all the other novels in which one of the smartest and most intriguing characters in twentieth century British fiction featured. It was like one of those games you played at drunken parties at university - we both knew there were a lot, we couldn't quite get all the titles in a sequence, but we reckoned we were talking about eight titles, which is about twenty hours of air time. Most Classic Serials run for between two and three hours; twenty hours is kind of uncharted territory.

Now commissioning programmes is quite a complicated process - given that I commission 400 hours of drama a year and am bombarded with programme ideas from every which way it takes a lot of administration, which involves systems and form filling-in, and box ticking and all the other gubbins associated with bureaucracy. But in the end you know it is a good idea or not almost instantly. And this was very definitely a Good Idea.

Patrick, who has delivered over forty brilliant Sherlock Holmes, and was about to direct Paul Temple all for Radio 4, was absolutely the right person to do them, the television versions were ancient, the radio versions equally so (all with different actors playing Smiley), and it was exactly the kind of ambition we were looking for the drama output on the Network. I also thought it would be something of a treat for the audience, a Classic Serial to relish.

I needed to convince my boss (Mark Damazer, the Controller of Radio 4). I casually floated it past him one morning -

"Mark, what would you say to us doing the complete Smiley?"

He paused. His eyes lit up and he launched into a one sentence eulogy about Smiley - albeit a very long sentence, kind of ten minutes long. Well maybe fifteen. We had a deal.

So why has it taken nearly three years to get to air? After all one episode of a Classic Serial takes about five days to record, edit and dub.

I asked Patrick to make tentative soundings about the rights.

In principle they were available.

In practice they were not.

Months - where nothing much happened - passed.

Now I had never met John le Carré, but nothing ventured nothing gained I sent him a letter asking for his help in persuading his secretive American agent to grant us the radio rights. It is the kind of letter you send, and never expect to get an answer to, so when a few days later my assistant told me that John le Carré's wife was on the phone I was astonished. She told me her husband thought the Radio 4 plan was an excellent idea and they would look into securing the rights.

What the combined heft of the BBC Copyright Department, Controllers and commissioners had failed to unlock over months the author himself opened within days.

But that is only the start.

Believe me, turning 2000 odd pages of brilliant prose into twenty hours of compelling dramatisation is not a simple matter. We hired the best writers (Robert Forrest whose version of Resurrection by Tolstoy was peerless and whose Pillow Book rendered a book of ancient Japanese courtly lists into a superb murder mystery) and Shaun McKenna (his To Serve Them All My Days was compelling), had lengthy discussions about whether or not to use a narrator, on who should play George Smiley (well Simon Russell Beale of course, to the part born I say), spent ages working out how to play out the series (in one twenty hour block or threaded across the schedule for a year), on setting up a co-production between BBC Scotland and the London Radio Drama department, etc., etc.

All I had to do was encourage the team - Patrick and Marc Beeby (his co-producer), the two writers, the Broadcast Assistants, the sound engineers and the illustrious and brilliant cast who have done the real graft.

But I think you are in for a real treat.