Composing A Violence of Gifts - Part 2 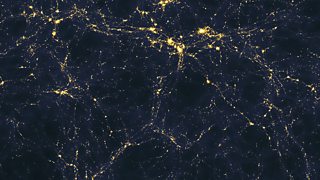 Large-scale structure of light distribution in the Universe

I’ve been writing A Violence of Gifts for what feels like an eternity but, finally, the composition work is coming to an end. I’m now in the midst of making the conductor’s score, orchestral parts and the piano reduction for the choir and soloists. It seems a good moment to take stock and reflect on the origin of the project, particularly as the piece itself is concerned with beginnings.

The initial idea predates my residency with the BBC National Orchestra of Wales. It had been simmering at the back of my mind for several years before taking up my post. The first official meeting with the orchestra’s artistic team happened just over three years ago, in December 2011, over a coffee at the Wales Millennium Centre. I talked about my desire to create a work exploring the origins of light, matter and life, inspired by Haydn’s 1798 masterpiece The Creation but considered from the scientific viewpoint of the 21st century. It is testament to the supportive nature of the orchestra that their answer was simply to say, ‘Yes, let’s go for it!’

My first task was to think about text. I had been rereading the Book of Genesis and Milton’s Paradise Lost, which were important sources of inspiration for Haydn’s oratorio. I searched through existing poetry but nothing took hold. The contemporary scientific viewpoint I wanted to incorporate hadn’t seemed to filter into the works of the poets I admired. I knew I needed to commission a new text rather than use existing words.

I heard Owen Sheers speak at the Hay Festival and then read his beautiful poetry collection Skirrid Hill. I was immediately struck by the vivid imagery and powerful themes in his writing. I had a hunch he might be interested in the subject matter and so I contacted him to ask if he’d like to get involved. He was keen. We arranged a breakfast meeting in early January 2012. Owen was deep in rehearsals for his new play – The Two Worlds of Charlie F – so we didn’t have much time. I swiftly explained my idea and Owen was fired up by the concept. We decided to work together.

In subsequent meetings we discussed structure, form, language, and potential characterisation. We studied the three-part construction of The Creation – the first part explores the creation of light and matter, the second explores the creation of life and the third tells the biblical story of Adam and Eve. Owen had the idea to make our piece in two parts: the first looking at the early universe – the origins of time, space and matter – and the second exploring the conditions which allowed the first living organisms to emerge from the early Hadean Earth. Owen also thought about the idea of writing for two soloists, a man and a woman, potentially characterised as a couple of scientists working together. Their tale could be woven through the structure of the piece mirroring the third part of Haydn’s oratorio.

As the piece developed these initial structural ideas have informed and influenced our thinking although the piece now has a much more fluid form. We have retained the twin strands exploring the origins of the universe and the origins of life, but, rather than being in two distinct sections, the two strands are now intertwined throughout the work in a sort of double helix structure. One section, a duet for the solo soprano and baritone called Imagine that moment, mirrors this idea perfectly as the soprano ruminates on the idea of being present at the dawn of time whilst the baritone considers what the Earth may have been like as the first single-cell life forms began to emerge. The soprano and baritone do not represent specific characters although the last number, 'It is not answers we seek', alludes to the idea they may be a couple about to bring a new life into the world. They consider how each new living thing is a culmination, an unbroken thread, stretching back millennia to the early Earth.

It was to be another 18 months before funding was in place from the Jerwood Charitable Foundation to support the commissioning of Owen’s text. The next stage was to travel to Switzerland to begin our creative journey and start exploring our ideas for the piece in more depth. But more on that in the next blog.