Composing A Violence of Gifts - Part 3 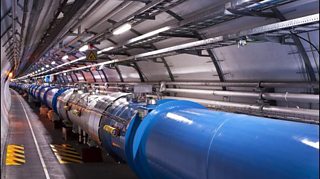 As Owen and I emerged from the plane at Geneva airport, grateful to have our feet safely on the ground once more, it occurred to me we would soon be below ground, inside the sonorous caverns of the Large Hadron Collider. We had arrived at CERN – the European Organisation for Nuclear Research – straddling the Franco-Swiss border for our research trip supported by a grant from the Jerwood Charitable Foundation.

Hopping onto a shuttle, we wound our way through a warren of blocks to the enigmatically named ‘Building 33’. Greeted by Ariane Koek, director of the Arts@CERN programme, we were led to a lecture theatre where Christine Sutton, a physicist from CERN’s European Particle Physics Outreach Group, gave us an introduction to CERN’s history and values. We learned that CERN, founded in 1954, was the first joint European venture set up after the Second World War to promote peace through scientific co-operation. Scientists come from every continent on the planet to work at CERN; it’s a truly international community. You’ll hear in our piece how Owen picked up on this idea in the opening section, which weaves together the verb ‘begin’ from 20 different languages.

We had some time to explore the site on our own. Wandering through a maze of buildings we stumbled across old sections of previous collider machines, long since abandoned in an out-of-the-way car park. We found notices and posters for every kind of club and society imaginable: a capella choirs, skiing groups, photography clubs, theatre societies, and, perhaps surprisingly, many different religious associations.  In the grounds was a statue of Shiva, a gift from the Indian government, with a plaque bearing words from physicist Fritjof Capra: ‘Modern physics has shown that the rhythm of creation and destruction is not only manifest in the turn of the seasons and in the birth and death of all living creatures, but is also the very essence of inorganic matter, Shiva’s dance is the dance of subatomic matter.’

After contemplating the philosophical complexities of the Shiva metaphor, we met Michael Doser, a particle physicist and member of the CERN Cultural Board, for lunch. He talked about his work on antimatter, describing how when matter and antimatter come into contact, they annihilate – disappearing in a flash of energy. The big bang created equal amounts of matter and antimatter, so the question is why do we observe far more matter than antimatter in the universe today? Michael went on to talk about the famous Cosmic Microwave Background image. It is a snapshot of the oldest light in our universe. Imprinted on the sky when the universe was just 380,000 years, it depicts tiny fluctuations representing the seeds of all future structures, the stars and galaxies, encoded in the frequency of light. As Michael left to go back to work we watched people zipping about the enormous canteen, as if they were particles of matter themselves, and wondered how we might incorporate these complex ideas into the piece. The first line sung by the soprano, ‘there is a relic of ancient light’, was inspired by this conversation. 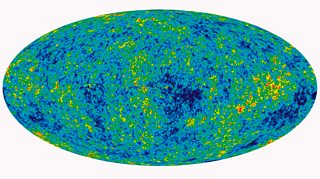 We were asked to give a presentation about our project in the CERN library. At this early stage we were apprehensive about sharing our embryonic ideas, but the session turned out to be incredibly useful. The scientists, librarians and support staff who had come to hear our talk were keen to share their ideas about what they thought might make successful subject matter for the piece.  They talked about the origins of the universe, how, in the first moments after the big bang, the universe was extremely hot and dense but, as it cooled, conditions became just right to give rise to the building blocks of matter – the quarks and electrons of which we are all made.

Later on, physicist Despina Hatzifotiadou took us to the ALICE experiment. Despina explained to us how her team are recreating the primordial state of the universe by observing collisions of lead ions inside the Large Hadron Collider. They are studying a new phase of matter, the quark-gluon plasma, believed to be present in the first moments of the universe. Despina led us through a series of security doors and into an elevator, which descended into a vast subterranean cathedral, built to house the heavy-ion detector at the heart of the ALICE experiment. The size and complexity of this machinery, built to uncover the secrets of the early universe, contrasted with the unimaginably small particles being studied.

Before coming to CERN I read many books about the origins of the universe and had started to feel as though humankind was a small, insignificant accident in an unremarkable corner of an ordinary galaxy. But after seeing the work of the scientists at CERN it struck me how wonderful it is that the universe has been able to create consciousness, and, in so doing, has acquired the ability to study its own origins. We may be small in the greater scheme of things, but this unique place is a remarkable corner of the cosmos.

On our journey back to the UK, our heads fizzed as we tried to assimilate all we had learned. Our minds had been on a journey between incredible extremes of scale; fusing the unimaginable vastness of the observable universe with the strange quantum world of quarks and gluons. Owen described it as like being in the ‘United Nations of Thought’. For him the task was to explore these monumental ideas in just three or four pages of text suitable for a 40-minute composition. For me, it was to interpret the essence of what we had learned into meaningful musical material. It was going to be a difficult, but joyful, undertaking.

Surround-sound for Hear and Now

Composing A Violence of Gifts - Part 4