Petroc's revving up for the big day in Vienna ... 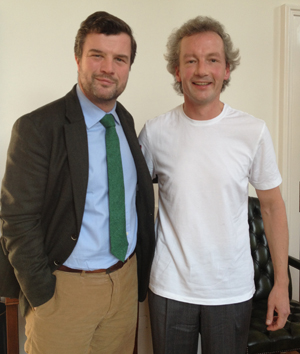 Petroc with Franz Welser-Most, before the shirt came off ...

Vienna has got the weather just right this year:  dry and bright, crisp enough to justify hat and gloves, yet without the bitter chill of my last few visits.  Sun streams through the window of Franz Welser-Möst’s dressing room at the Musikverein, reflecting on the gilding around a pair of plaster cherubs,  the only decoration in what is otherwise a rather characterless space.

Given that we are chatting midway through the first performance of the New Year Concert, Welser-Möst is surprisingly relaxed. After greetings have been exchanged, Viennese pleasantries are abandoned as he pulls off his dress shirt.  He’s just ended the first half with Franz von Suppe’s Light Cavalry Overture. ‘This is a piece I was very keen to include,’  he tells me. ‘It was the first music I ever conducted, and it reminds me of watching this concert as a child.’ Growing up in Linz, he says he doesn’t remember a time when he didn’t watch the concert. ‘In black and white of course,  with Willi Boskovsky conducting.'  Boskovsky, sometime leader of the Vienna Philharmonic,  directed the concert for quarter of a century before his retirement in 1979;  nowadays the conductor changes every year; this is Welser-Möst’s second appearance on the rostrum.

The New Year's Day concert is performed three times,  in the evening of New Year's Eve,  the broadcast on New Year's Day,  and on December 30th,  when the Austrian army fills the balcony.  Their drab olive-green uniforms contrast with the riot of golden caryatids, plaster busts and the shimmering crystal chandeliers, young soldiers leaning out over the edge of the slips to photograph each other with their smart-phones. 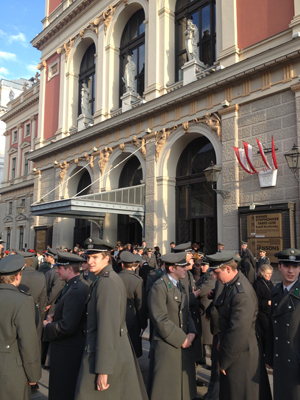 Members of the Austrian Army at the Musikverein

Wagner’s music will dominate Franz Welser-Möst’s schedule at the Vienna State Opera in 2013, with Parsifal in March, and a Ring Cycle in May. He has included music from Lohengrin in this years concert - which sits a little oddly, though not unsatisfyingly, amid the sweet cream of the Strauss family.

For the conductor it is a madly busy time,  with performances of Ariadne auf Naxos at the opera house immediately before and after this run of New Year concerts. Will he venture out on to the packed streets at midnight tonight for a glass of mulled wine?  No, Welser-Möst laughs. He will end 2012 and start 2013 tucked up in bed, hoping to sleep through the fireworks and be properly rested for tomorrow's extravaganza.

Petroc Trelawny presents live coverage of the Vienna New Year's Day concert on BBC Radio 3 and the BBC HD Channel from 10.15am. BBC2 joins for the second half at 11.15. The concert is repeated on BBC4 at 7pm