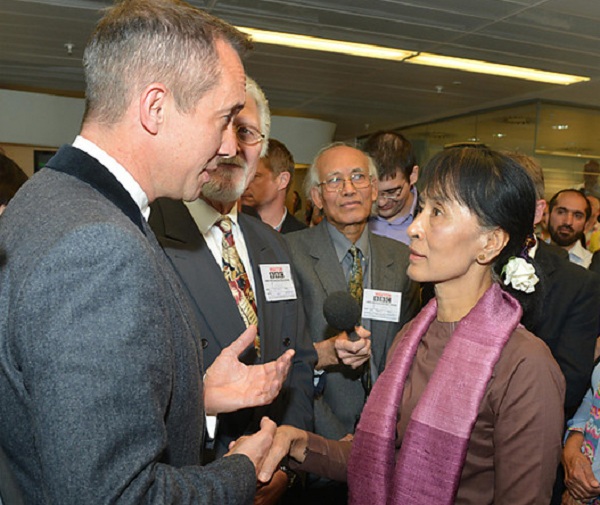 This afternoon Barry Wordsworth took the stand at Cadogan Hall to conduct the BBC Concert Orchestra in a live broadcast of Portrait of Aung San Suu Kyi, Nobel Peace Prize winner and Burmese opposition politician. On Radio 3's highly successful Portrait Day in May this year, listeners were asked to suggest an individual for Jonathan to take as the subject of a portrait in music.

In his opening remarks to presenter Louise Fryer, Jonathan explained that Aung San and the details of her life were so well known that there was a risk in trying to portray a life of events, many of them cataclysmic, and so his approach was to compose ‘around’ aspects of her character – and there wouldn’t be any pastiche of Eastern music, although we might hear some ‘modes’.

The piece makes considerable use of the strings, which opened the work with an extended passage of Mahlerian calm and serenity – the beauty of Burmese countryside was evoked, along with images of Aung San’s stoic calm through endless years of house arrest. We know that this was no idyll, as Aung San remained separated from her husband in the UK, even to his death; a reminder of the egregious cruelty of this comes with the shock interruption of chilling machine-gun raps in the percussion and blaring military tropes from the brass. The final section of the work is a fast workout with accelerating Sibelian busyness in the orchestra with beautiful woodwind solos atop – this struck me as representing the frenzy of renewed political activity and positive energy which has flowed from Aung San’s release from captivity. The work ends suddenly – Aung San’s work is far from complete, and the story is by no means over.

If I’m right about the Sibelian flavour of Jonathan’s work, he could not have known that the Concert Orchestra would pair it with Vaughan Williams’s 5th Symphony, which RVW dedicated ‘To Jean Sibelius, without permission.’  In fact, the BBC Symphony Orchestra’s legendary conductor Sir Adrian Boult (whom I heard conduct the 5th at a Prom concert in 1975, in one of his last public  appearances) subsequently secured permission. Sibelius wrote: ‘I heard Dr. Ralph Vaughan Williams' new Symphony in Stockholm under the excellent leadership of Malcolm Sargent...This Symphony is a marvellous work...the dedication made me feel proud and grateful...I wonder if Dr. Williams has any idea of the pleasure he has given me?’

Certainly, I felt the spirit of Sibelius’s poignant, limpid Swan of Tuonela hovering over both works this afternoon. VW’s 5th is one of those symphonies which ends quietly, and the BBC Concert Orchestra did the work full justice before a packed Cadogan Hall, not least in the closing bars of the third movement, Romanza, which is one of the most beautiful pieces of lyric orchestral writing in the entire canon.