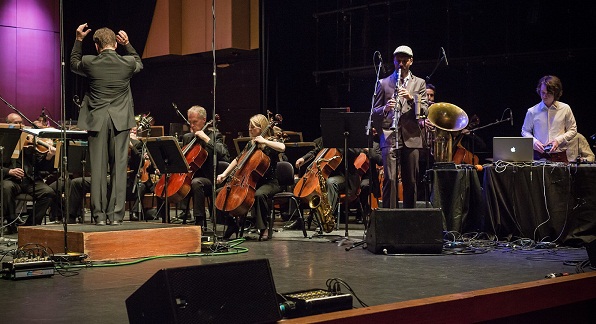 The London Jazz Festival in association with Radio 3 has truly kicked off in style!

With an energetic opening Jazz Voice concert live from the Barbican the audience both at home and in the hall were treated to an eclectic mix of singers from Juliet Roberts, Imelda May and Gwyneth Herbert to our very own Claire Martin and surprise appearance from Boy George, plus many more conducted by Guy Barker. The atmosphere was bubbling with excitement and by the end everyone was one their feet and singing along to an Aretha Franklin medley.

Following hot on the heels of the opening concert came the official Radio 3 launch from Ronnie Scott's with Jez Nelson Introducing some of the cream of the festival including Terence Blanchard, GoGo Penguin Ambrose Akinmusire surrounded by a lively crowd of jazz fans live on Jazz on 3.

Over the last few days Radio 3 has been capturing many of the concerts throughout the festival including French double bassist Henri Texier, legendary singers Kurt Elling and Sheila Jordon, Portuguese Fado singer Carminho and the Matthew Tripp Trio with their contemporary jazz sounds from New York City. On Tuesday we heard a special performance from the BBC Concert Orchestra including the world premiere of Radio 3’s New Generation Jazz Artist Shabaka Hutchings’s (pictured) Babylon with the clarinettist joining them live on stage. This was a unique insight in the creative mind of a rising jazz star depicting the original metropolitan city. These concerts, alongside many more, are all to be broadcasts across our jazz programming over the next few months. Take look at the broadcast schedule so you don’t miss them. All broadcasts will be available for 7 days after the programme on BBC Radio 3 iPlayer or on the Radio 3 homepage.