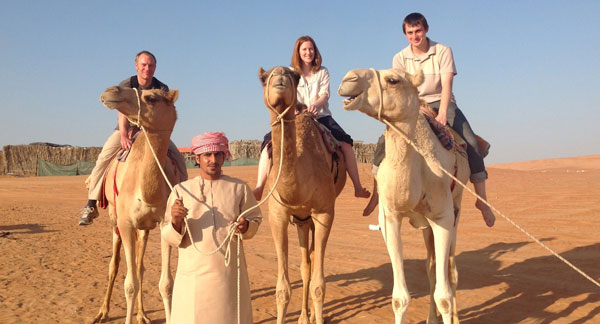 When I started touring with professional orchestras 20-plus years ago, the  majority of tour circuits tended to consist of European cities, North  America, South America, Japan and, if you were lucky, Australia. Now with the modernisation of China (building new concert halls every  year), that country has recently been added to the list. But I think we are now on the cusp of adding another circuit - the Gulf States.

A sort of art revolution seems to have been going on here in the last ten years. In 2005 the Abu Dhabi government opened the Emirates Palace concert hall in a 7-star hotel, then four years ago the Qatar Philharmonic gave its first concert in Doha (under the baton of Lorin Maazel, no less). Last week Bahrain opened its new 1001-seater National Amphitheatre; Dubai is also building an opera house and last year the spectacular Royal Opera House, Muscat opened its doors in the Omani capital. This is where the BBC Symphony Orchestra caravan rolled up last week, thanks to an invitation from the Royal Opera House.

There are times when touring is tough; jet-lag, excessive travelling, concertising and general weariness can take its toll not to mention the emotional part of leaving loved-ones back home. But occasionally one can fall on one's feet. Arriving in 30 degrees C when you left London cold and damp was always going to feel good and the prospect of the rest of the day free to acclimatise, catch up on sleep and explore, felt even better.

Some were brave and went in search of camels to ride, some slapped on the sun cream and went swimming, others simply crashed out (night flights aren't always conducive to sleeping). I sought out frankincense and myrrh in the old souk (well, it is almost Christmas...).

The Royal Opera House is quite simply stunning - a vast white marble exterior housing carved teak panels and a huge organ inside. It is said that King Sultan Qaboos (the Omani ruler since 1971) is a big fan of classical music and organ music in particular since studying in England as a boy. I wondered how local people felt about millions being spent on imported culture; certainly the Omani gentleman next to me on the flight out wasn't interested, but my waiter at breakfast said that he liked going to concerts there and thought that £10 for a ticket was very reasonable. I certainly spotted more Europeans in the audience than Arabs but it was encouraging to see a few local families with their young children listening intently to Britten, Rachmaninov and Brahms. With the growth of music education, orchestras and opera houses in this region together with fabulous hospitality, the Gulf Arab states could well become a popular and attractive part of our touring itinerary.