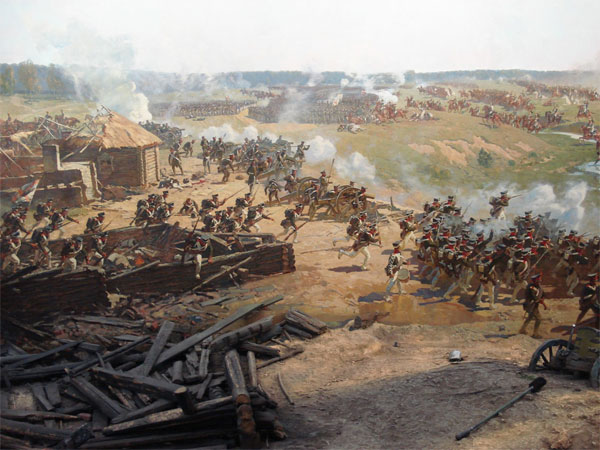 From the Battle of Borodino panorama by Franz Roubaud

Tim Dee is producing three Sunday Features and a week of Essays - all on the subject of Napoleon and 1812 - as part of Radio 3's Napoleon season which begins next week. Here, he gives the background to some exciting programming

Seventy-miles west of Moscow at Borodino the museum of the battlefield was still being spruced up when we visited, even though the 200th anniversary of 7th September 1812, the day of the almighty battle there, had already passed.  But the new toilet block had been installed with top-of-the-range German units.  My presenter, Zinovy Zinik, who left Russia for good 37 years ago, declared that he had never seen anything like it in his old homeland and was then transported by the porcelain to rhapsodic reflections on Soviet plumbing and still further back to anxious speculations on what it must have been like in that very spot two hundred years ago.

Speech radio - talks and features - doesn’t do epic very easily.  How best then to capture in words something of the extraordinary year of 1812 when, bewitched by Napoleon, half the continent of Europe marched East, thinking that it might conquer Russia?  Orchestral music (Tchaikovsky’s 1812 Overture) and big baggy books (Tolstoy’s War and Peace) have grappled hugely with the huge event and delivered the sound - cannons and all - and the panoramic prose sweep, from the battlefield to the big houses and in and out of the combatants' heads.  But there is only so much noise you can squeeze on to a tape alongside a voice at any one time.  How can radio do the 28 million bottles of wine taken by the Grande Armée from France to keep it happy all the way to Moscow; or, harder still, how can it say anything commensurate with the fact that somewhere between 70,000 and 100,000 people were killed in the single day’s fighting at the Battle of Borodino?

So - the German toilet helped Zinovy.  And the closest I got to a sense of the madness was the feeling of shared insanity, futility, and despair that is the condition of driving (or rather not driving) around Moscow’s catastrophic road system.  Staring for a week at the stationary and smelly rear-end of 100,000 trucks and cars in front of me, all of us going nowhere fast, put me in mind of the view that both Napoleon and his foe, the Russian general, Kutuzov, must have had as they spent the day at Borodino eating picnics and sitting on camp-chairs some miles away from the fighting while watching their own people kill one another in ghastly excess.

Napoleon and his army sort of won the battle albeit at a huge cost, but by the time they got to Moscow the city was in flames and many of its citizens had fled: the conqueror of Europe hadn’t reckoned on the Russians’ nomadic genes that allowed them to happily burn their camp on the plain, as it might be, and move away.  With no victory prize to secure and winter coming on hard, the journey back was far worse for Napoleon and his ragged army.  All picnics were over.  Soldiers ate their horses, then one another, and then even themselves as bits of their frostbitten bodies dropped off and could be gathered up and nibbled.

You have to hope that those fingers, thumbs, and toes, and the other little things - the things that do creep, word by word, into your tape recorder - can in the end tell at least something of how it was.  And that such local detail can stand up to the vastness of the canvas and the larger than life reputations and characters of the key players.  Tolstoy was among those players but this was also a lesson he learned and then passed on.  The novelist Stendhal, on the French side, was actually there and turned the impossibility of seeing the whole picture into a central tenet of his novelist’s creed.  He followed Napoleon from Paris to Moscow but by the time he was on his way home he reported that he was going down on his knees not to worship his emperor but at the sight of a potato that chance threw across his path.  Worshipping or at least noticing a potato in the vastness of a year of European-wide upheaval and mayhem seems to me a good model for how a radio feature might work too.  Notice the little things and let them show you how the big picture is made.

Other Radio 3 programmes also on Napoleon include Composer of the Week, Drama on 3 and Words and Music.