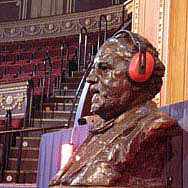 For the last three years, BBC Safety Manager Ruth Hansford has been conducting research into musicians' hearing. The result is a fascinating and entertainingly illustrated full colour 48-page guide on noise, its effects, and how to deal with them – it's freely available and should be consulted by musicians of every genre and non-musicians with an interest in the subject. Here, Ruth describes how the guide came about, and how professionals can contribute to Part II – a Toolkit for Managers

Did you know the BBC is the UK’s second-biggest employer of professional musicians? The Ministry of Defence employs around 1,300, while the BBC has over 400 instrumentalists and singers on full-time contracts, plus a roster of hundreds more freelance musicians we engage for specific projects – for example a programme that requires double or triple woodwind and brass, a big percussion section, or a specialist instrument like a theremin – or if a player goes off sick.

We have a lot of ears to look after. We’ve known for many years about the risks associated with prolonged exposure to the high sound levels that orchestras and singers are capable of producing. Where in the past there was a deal of scepticism about 'Health and Safety gone mad', it seems there is now more of a consensus that there is a real issue to address, and that we must all work together to ensure we keep the show on the road – looking after our musicians’ hearing and equipping them for a long, healthy career in music.

For a whole year starting with the 2008 Proms season, I investigated the noise exposure of BBC musicians across a range of projects, from Rodrigo’s Guitar Concierto de Aranjuez for guitar (louder than you’d expect) to Carl Orff's Carmina Burana (every bit as loud as you’d expect), up and down the country in over 30 venues.

Three things came out of this: first, there’s no ‘one-size-fits-all’ solution for classical music as there are so many variables – repertoire, venues and individual musicians; second, it requires collaboration between musician colleagues, teachers and managers at all levels; and finally, it’s a long haul – it takes time to change old habits and think about hearing protection as a matter of course.

Last July we held a seminar in Broadcasting House bringing together 140-plus people from the sector: orchestras of all kinds including pit orchestras, musicians, acousticians, health professionals and safety colleagues including several from the Health & Safety Executive, the unions, conservatoires and many more. This was the basis of a wide-ranging partnership that has resulted in the publication of a Musicians’ Guide to Noise and Hearing, now available on the BBC website. 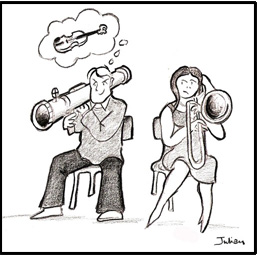 On the opening page of the guide we have three clips of the third movement of Brahms’s Fourth Symphony. The first is as it should sound, the second simulates how it might sound if you are losing your hearing with age, and the third clip simulates what you might hear if you have noise-induced hearing loss – the triangle disappears altogether and it sounds just wrong – ‘rather alarming’, in the words of Radio 3 senior studio manager Philip Burwell who created the files.

Musicians tend to do well in hearing tests, compared to the general population. But it’s the hearing problems you can’t easily measure – tinnitus, the loss of ability to pick out information in a noisy environment (the cocktail party effect) – that are the most talked-about among musicians. Many in their forties and fifties wish they had not been so silly in their youth, showing off with stories of going to a gig and having a ringing in their ears for days after. But then, that generation tends to be less addicted to their iPods – a major emerging health risk for younger people.

You come across all sorts of views on hearing and hearing health: a few musicians are sceptical, many are sanguine: ‘it’s just part of the job’, but many more are secretly (or openly) concerned about their ears. Those who teach are beginning to encourage their students to wear hearing protection, though they would never have thought to do it as students themselves.

The tide is turning. One member of the editorial group for the ‘noise guide’ remembers there was open warfare between members of the brass and woodwind sections in his old orchestra. Now he says musicians are much more likely to have a grown-up conversation and see each other’s point of view. And conductors are increasingly aware of own responsibilities too. We hope the guide will empower all involved in music-making to do the right thing for their colleagues and themselves.

The links below offer you the chance to read more about the project and to download the Guide itself in either the full version or a speed-read summary. The index page also gives details of Part II - a Toolkit for Managers which is currently a consultation draft - I can receive comments on this until 12 December 2011 and the page gives details of how to contact me.