Inside Goldie's Band - a musician's tale ... 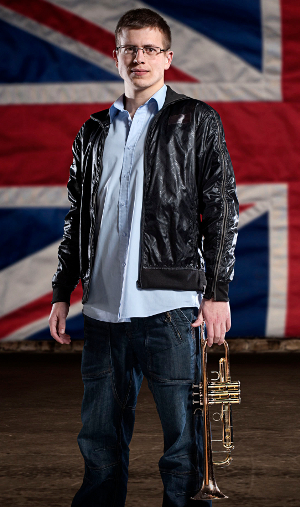 22-year-old brass player Sean Chandler is a member of Goldie's Band, featured in BBC 2's Goldie's Band: By Royal Appointment. Episode 1 of the 3-part series - introducing the band members - was broadcast last Saturday. Here, Sean describes the experience of being invited to the first intensive residential session of the project. You can see the session in Episode 2, next Saturday, 9pm on BBC 2.

On the way to the first residential, I can honestly tell you my heart was in my mouth. My hopes and fears were that the other band members would be a mix of volatile, aggressive thugs and the kind of self-centred, ego-driven puny meffs we are often entertained with on the likes of, dare I say, X-Factor and Britain’s Got Talent.  How wrong was I? What I was met with was what could only be described as ‘warmth’. I was introduced to the marvellous (and believe me, consistently outstanding) filming crew and led to where the other band members were, in the lounge of where we were staying ...

Myself and Lester were coupled to walk into the school together while being filmed because we happened to arrive at the same time with Theone, Jack and Natalie.

Lester is someone who strikes you with his charm... daring charm at that, and you can’t help but be taken by the ‘gentle giant’ aura he has about him. Always concerned about learning about other people, it wasn’t hard for us to start a conversation about what we were expecting from our time together.

Sat in the group for the first time I found true warmth and felt right at home. I chatted to Finn, who scared me slightly because of his rocker image, but was wearing nail varnish(!?) He was also someone who I took to. Humble, caring and always giving hugs and wearing his heart on his sleeve, Finn - along with Shahid, Vahan, Kwabs, Will and Jasdeep - was easily a member on that first residential I looked to for assurance and positivity. That’s one rocker stereotype smashed up right there, sir!

We didn’t see any of the mentors before Goldie told us about performing at Buckingham Palace, except at a glance and a brief hello at lunch... (I’ll never forget turning round from chatting to Afrika and seeing Goldie enter the hall with his puffa jacket and cap. He looked well ‘ard). When Goldie dropped the bombshell about performing at the Palace, we were shocked, followed by an awkward silence. Thank Heavens for Theone (charismatic, charming, handsome, leader of the pack, do-er, pro-active....you get the gist) who broke the silence and told us his Nan would be well proud of him. Loud laughter promptly ensued.

Me and Theone are coupled for reaction interviews. Theone is cracking jokes left right and centre and I proudly stand on his left as the wing man. Happy to help, this is when I realise Theone is a born performer, eager to share the love and unmoved in his desire to proclaim his message.

Throughout the rehearsals and mentoring sessions on the first residential, the one thing I saw on all the faces of the band was determination. The main one I remember is where Lester and Natalie compose ‘Olanzapine’. Sitting in a room and hearing them bare their souls in the songs they’ve previously written was a massive experience for me, and I now can see just about how much music means to these people. What an outlet we have!

Passionately seeking to get the tune right to suit everyone (not easy, especially for a severely hard of hearing trumpet player playing by ear!), was a goal shared by us all, and it was this working together with X and Y (thanks Keane) that made us bond. The beauty that music has is not in the sounds you hear, but in the sounds you see in the faces of the people you work with and love.

Follow this link for details of Goldie's Band: By Royal Appointment, Episode 2.

Watch a trailer for the series 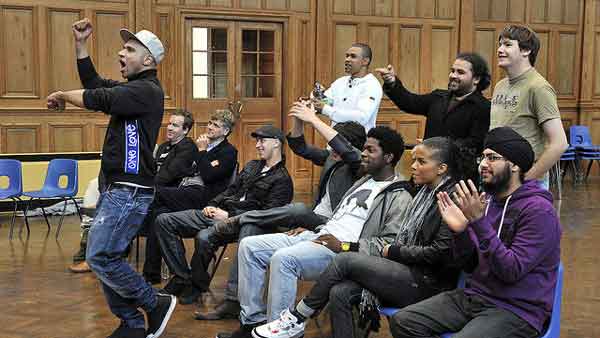