Getting the band together, with Goldie ... 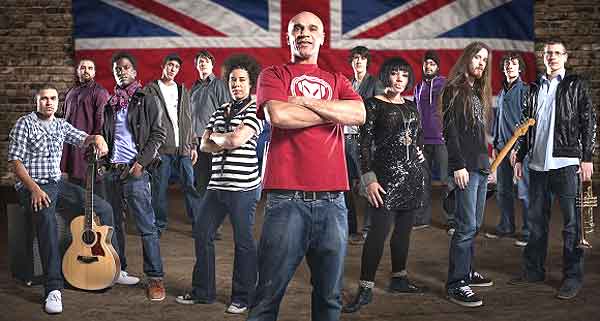 If someone asked you to put together a new Band, of underground young British musicians, who can write and perform original music that is genuine and heartfelt, where would you begin? Songwriters? Or instrumentalists? Rhythm section? Or Vocals? How many people would you put in the band? Where would you find them? And what genre of music should they play? These are just some of the questions I asked myself when I was first appointed Series Director on Goldie’s Band: By Royal Appointment.

Executive Producer Celina Parker first approached me with her idea of forming a band in 2008, after we worked together on Maestro. Goldie impressed a lot of people during that series and the cerebral cyclone that is Celina felt he would be a powerful advocate for the positive power of music to change lives. After all, he wrote Mother - a cathartic track that helped him communicate and come to terms with being 'abandoned' in the care system (aged 3) – and, without a single music lesson, became a Drum and Bass pioneer.

At this stage I was thinking what’s not to like. Goldie has heaps of enthusiasm. I love music. Lets start filming. But then reality kicked in: I’ve never actually put a band together. Although I did once play the tenor drum for my school pipe band at the Edinburgh Military Tattoo… a position I attained after being told I was a terrible bagpiper! Thankfully the BBC Classical Music Department is full of talented musicians – some of whom look like real Rockers...

Preparation is key to any successful venture and over the next two years, music action groups, clubs, charities, teachers and other musicians were contacted. All of them were asked to put their best songwriters and instrumentalists forward. What we needed was that they must be unsigned, unknown and that their music had helped them take on challenges in their own lives. Big ask. Again, I’d like to take credit for this groundwork, but I was on another project and high praise must be given to the production team members, especially Victoria Jones and Cat Dixon.

Around now, it seemed everyone wanted to get involved - like I said, I wasn’t around! Prince Harry signed up, Buckingham Palace was booked and Goldie’s team of mentors enlisted: Guy Chambers, Soweto Kinch, Ms Dynamite, Cerys Matthews and Steve Abbott all offered to help - I actually cannot remember another project, where the ‘celebrities’ were so much more interested in the idea than in profit or building profile…they really did do it for the love of it, because, trust me, there wasn’t much money involved!

In June 2010, filming began. Goldie and the team traveled the length and breadth of Britain, meeting and jamming with a whole range of musicians. Goldie was paired up with Hip Hop and Jazz musician Soweto Kinch, because we thought they had contrasting but complementary skills (plus they could put up with each other on long car journeys...).  Steve Abbott and Cerys Mathews because they were in love with each other – they’re husband and wife. Guy Chambers was coupled with Ms Dynamite because they had worked together previously. That’s a lot of mentors – unusual in TV terms - but together they covered a huge musical range and we were going to need that breadth.

Finding singers, songwriters and instrumentalists who just want to be famous is easy (don’t worry you won’t see any of them on this series). Thing is, reaching out to young people with sometimes very difficult lives and a proven passion for music is incredibly difficult. But when you find them, you know.

After about four intense months on the road, Goldie and team retreated to his home to watch through the talent each pairing had found and to decide on the band's final line up. This was a painful and difficult process and from my point of view as director, a 24-carat narrative nightmare. I always thought the band would be big, with eight or nine members. But it ended up becoming a seriously BIG BAND – the endless possibilities and combinations encouraged them to keep adding names – and so, ultimately, 12 people were selected. The euphoria – and let’s be honest, relief – that they’d identified band members with such genuine potential was enormous. I wasn’t going to need to play my bagpipes after all. It was time to start thinking about exactly how that first music residential was going to work.

When I watch the first episode now, so many wonderful memories flood back. The band is brimming with authentic talent. I just hope that you like this series as much as I have enjoyed making it.