The Unfortunates - how the play was made ... 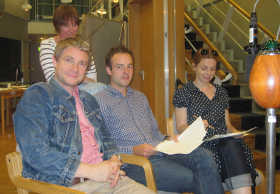 Next Sunday at 8pm, Radio 3 broadcasts The Unfortunates, an adaptation of B S Johnson's novel in which a sports journalist travels to a strange city to cover a football match, only to discover it was the city where he first met his friend Tony who has died young of cancer. We follow the journalist as different memories of his friend are triggered. Originally published in 27 unbound pamphlets in a box, The Unfortunates was intended to be read in a random order. The lack of a fixed order is suggestive of the way memories occur, and the book becomes a meditation not just on friendship and loss, but also on the nature of memory and writing as our hero struggles to recall everything in order to 'get it all down' as he promised his dying friend he would.

Here, Graham White, who adapted the work for radio, describes the production process.

Endless eating is a peril of the recording process (at least this side of the mic) and I’m tucking into a chocolate Hob-Nob while listening to Martin Freeman play Bryan, the narrator of The Unfortunates, as he grazes through a disastrous meal in a rainy Midlands city in 1969.

Martin has a mammoth day today, working through the intricate language of Bryan’s interior monologue. The character’s a belligerent, witty, sensitive novelist not a million miles removed from B S Johnson who’s on a day-job trek North to cover a football match for a Sunday newspaper.  We’ll randomise the order of the scenes for our broadcast, following the novel’s lead, but it’s a very orderly recording. As Martin picks his way through the memories of Bryan’s past sparked by the city, producer Mary Peate, SMs Pete Ringrose,  Colin Guthrie and Jenni Burnett weave an extraordinary soundscape of streets, crowds, trains, dismal guest  houses, football grounds, old-fashioned grocers and south coast beaches around Martins’ deft and detailed performance.  The studio is a hive of observations and insights while the recording comes together – discussions of the price of beer in 1969, the whereabouts of a Chinese  restaurant in Nottingham (invaluable help from RDC actor Tony Bell, a local boy, on this) and the exact nature of the Ariel Red Hunter (Pete knows it’s an iconic motorbike and part of a dig in the novel against scooter boys. This leads Martin to joke that he’d have turned the job down if he’d known there’d be any dissing of Mods).

During the session we’re visited by BS Johnson’s son Steven (named as a young boy in the book) along with  Diana Tyler, who worked in Radio Drama’s script unit years ago and was Johnson’s agent and confidante at the time of his early death at the age of 40. 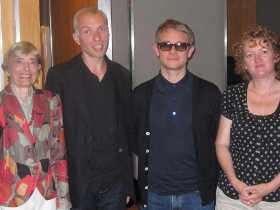 Diana finds listening to Martin play Bryan very moving, and both Steven and Diana remark on  how closely his delivery catches their memories of Bryan, a tribute to  Martin’s resilient excellence - fresh from a 5 am start to publicise ‘Sherlock’ on Breakfast TV.

Playing Bryan’s old friends Tony and June, Patrick Kennedy and Jacqueline Defferary bring Bryan’s memories to life in the room.  Patrick belies his youthful good looks to play a man on the verge of death, while Jacqueline as Tony’s wife June and Sean Baker as his father cast a sobering light on Bryan’s journey through a past which he’s only just coming to understand.   The beauty of radio is captured in moments when, with the actors in front of us, effects CDs spinning and a Studio Manager driving the temperamental recording desk, we’re transported into another reality.  Martin’s performance of the final section of the script as Bryan imagines his arrival home to his sleeping son – three years before he, B S Johnson, committed suicide – is deeply affecting.

Martin returns the next day enthused  by watching B S Johnson’s own 1973 film, Fat Man On A Beach on YouTube, astounded that anyone could have got such a madly brilliant piece made and broadcast on a mainstream TV network. A great account of stumbling across it unawares opens Jonathan Coe’s wonderful Like A Fiery Elephant, his 2006 biography of Johnson  and one of the most compelling, and spooky, books I’ve read.

The production edit follows, the recording divided into 18 sections and randomised before the broadcast – the first  and only time it’ll have been heard in that order. It will then be placed on a ‘carousel’ on the Radio 3 Website so that you can listen to it in whichever – random – order you choose.

The Unfortunates is broadcast on Radio 3 at 8pm on Sunday 17 Ocober. For full cast details, click here. The web page also explains how you will be able to listen to the play in the order of your choice, after transmission.