BBC Symphony Chorus alto Monica Todd continues her account of rehearsals for the imminent premiere of a new work. 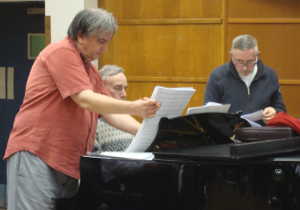 'Who is that?' muttered a few of the singers to their neighbours, pointing at the friendly-looking chap standing by the piano. 'It must be Ian McQueen...'We are used to meeting composers who are neither dead nor wearing breeches and a powdered wig but we can still be surprised if we haven't met them before.

Some people thought he was older than they expected, others younger; however, his soft Scottish accent surprised no-one. He came across as matter-of-fact and affable, cheerfully answering questions and chatting to chorus-members.

Formulating the first ever performance of a newly-composed piece is a very different experience to the more usual task of devising an interpretation of an older, frequently-performed work as there are no precedents to follow and no accepted wisdoms to refer to. In fact, a movement of this piece has been re-written since rehearsals began. In that way, the work of a living composer is like a living being itself.

'Earthly Paradise - Sayings, Songs and Poems of William Morris' sets various texts by Morris. Movement 1 includes the passage: 'The doomed ship drives on helpless through the sea' and I will confess that there were moments in rehearsal when I really related to that imagery! Scoring that deviates from normal notational protocol always presents challenges. For example, the altos and basses have to snore at the start of movement 4 - trust me, this is what is says in the score: "Hroh! Hrr! Hurrorr~~~~"! It is incredibly difficult to snort (like waking up suddenly) in time with each other and exactly on a half beat but it is something we intend to do perfectly on the Barbican stage in the performance!

Ian attended our last rehearsal and so could offer advice about some of the more innovative and opaque aspects of his score like the non-language syllables that are intended to create vocal harmonics or the imaginative stage directions that on one occasion ask us to be 'insidious' and at another point ask the tenors to chant with an 'asthmatic Icelandic accent'. Good thing we have the humour to tackle the seemingly-impossible with confidence... 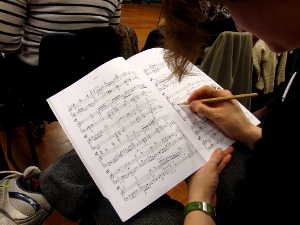 Our remaining rehearsals are with Sir Andrew Davis who will conduct the concert on Saturday. Longstanding members of the chorus remember him from his 11-year tenure as chief conductor and we see him quite a lot now in his current role as conductor laureate. He is always cheerful and the chorus have complete confidence in him. Since there is a full symphony orchestra between us and him when we perform, feeling a personal connection is really important. We all know that he will lead the performance at the Barbican on Saturday expertly. You can hear it on Performance on 3 on Tuesday 13 April and Ian McQueen will be live in the studio with presenter Martin Handley to introduce his piece. Tune in!