A season of George Orwell on BBC Radio 4 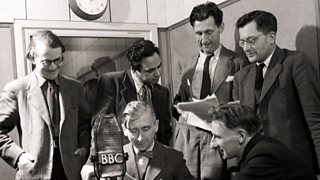 On Saturday 26 January, the animals of Manor Farm will overthrow Farmer Jones to the tune of ‘Beasts of England’ and The Real George Orwell season on BBC Radio 4 will have begun. I know that’s a spoiler but it happens fairly near the beginning so hopefully I’ll be forgiven! Following hot on the heels (hooves?) of Animal Farm is a new production of Homage to Catalonia on Sunday and the first of four biographical dramas about Orwell’s life on Monday.

Not only does the season include a Start the Week on Orwell’s political writing and the first ever radio dramatisation of Nineteen Eighty Four starring Christopher Eccleston as Winston but it also shines a light on the man behind the writing and attempts to explain the influences and experiences which led Orwell to write his final book.

As an Assistant Producer working on extra content for The Real George Orwell season, I’ve learnt a lot through this project. I didn’t know that Room 101 (where Big Brother’s torture takes place in Nineteen Eighty Four) was based on an office in Broadcasting House (only a few floors below where we’ve recorded the dramas). I didn’t know that Rachel Whiteread had made a plaster cast version of that very room (of which we have photos). I didn’t know that there is no recording of Orwell’s voice. I knew he had worked for the BBC and that he had his throat shot during the Spanish Civil War but didn’t realise that Joseph Millson, who plays Eric Blair, wouldn’t be able to listen to Orwell himself when researching the role. I didn’t know that there’s a letter objecting to Orwell’s voice in the BBC archive (along with his resignation letter and other amazing pieces of history!). I’ve interviewed Orwell’s biographer DJ Taylor who explained to me how Eric Blair chose his pen name and marvelled that this amazing body of work could have been written by ‘H Lewis Always’.

Apart from these discoveries, I’ve had the pleasure of becoming re-acquainted with Orwell’s writing (which I’m ashamed to say I hadn’t read since school). I’ve read Down and Out in Paris in London ahead of the Book at Bedtime and will never feel quite the same about eating in a Parisian restaurant again! I’ve remembered how great the characters in Animal Farm are, how difficult and confusing all the in-fighting in Catalonia must have been and how moving Winston and Julia’s relationship in Nineteen Eighty Four is.

Doctor Who times two at the BBC Audio Drama Awards 2013

The BBC Radio team explain their decisions, highlight changes and share news from all of BBC radio.