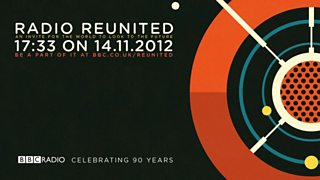 When the first BBC transmitter, known as 2LO, crackled into life on November 14th 1922 few could have guessed the impact that radio would have on our world. A few thousand enthusiasts, listening by headphones to primitive crystal radio sets, heard a news bulletin read by Arthur Burrows, the director of programmes of the newly formed British Broadcasting Company (as it then was).

Britain was a very different place, still convulsed by the aftermath of the First World War and just entering a new era of technology. However, while motor vehicles and domestic telephones led to more long distance contact with friends and family, it was radio, as the first mass broadcasting medium, that bought people together across the nation to share experiences together. As we know, television and the internet have burst upon us in the decades since, but the wonders of radio have endured. Indeed, today radio is flourishing.

To mark the 90th anniversary the BBC is attempting an ambitious first, bringing together around 60 our stations (network, local, national and international) for a single remarkable moment – a three-minute piece of history broadcast simultaneously around the UK and the world. At its heart will be an idea that explains radio’s success: listening to each other.

So if you could talk to the audience of the future, people listening 90 years from today, what would you say? What would be your hopes, fears or observations to a generation yet unborn? It may be a piece of advice, a wish or a question. You might address it to the world at large or more personally, maybe to a great grandchild. You’ll need to keep it short, probably no more than 20 words because we reckon the pithier the thought, the better the broadcast. Personally, I think I may remind people on the limits of technology and enduring beauty of the British landscape. Or maybe just celebrate the fact that the relevance of the wireless has never faded.

We’re thinking of this Radio Reunited moment as a message in a bottle across the years. I’m delighted that Damon Albarn has agreed to set the best of the thoughts to music which we can play out to our listeners on November 14th 2012 at 5.33pm, to mark the first broadcast from 2LO. Radio has come a long way since those crystal sets – short wave, medium wave, FM, digital and now the internet – and there’s no telling how it will be broadcast in 2102. But one thing I am willing to bet is that 90 years from today someone in the BBC will dig out our 2012 90 year broadcast and millions of people will still be tuning to radio to hear it once more.

Send your entries by text or email to your favourite station’s drivetime show or tag your tweets using the hashtag #BBC90. You can also leave your entry in the comments below.

The best will be given to Damon to include in his unique composition. All entries must be submitted by Friday 14th September 2012. Listeners whose messages are chosen will be invited by their chosen station to record their thought.

Reading and Leeds 2012: Online, mobile and on demand

The launch of the BBC Audio Drama Awards 2013

The BBC Radio team explain their decisions, highlight changes and share news from all of BBC radio.