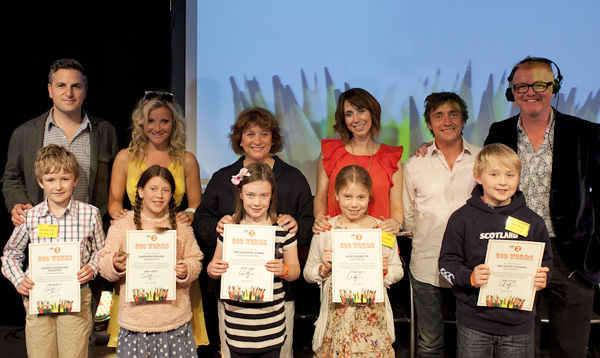 It's that time again. Thoughts at the Chris Evans Breakfast Show have turned to all things literary. We've inked our quills and gathered our most eloquent thoughts in preparation for today, where we've launched 500 WORDS - our short story writing competition for children aged thirteen and under.

Buoyed by the success of last year's inaugural event, we're attempting it all over again - only this time we want to make it much bigger and even better!

We have already secured a stellar panel of judges steeped in the art of children's literature: Dame Jacqueline Wilson, Charlie Higson, Lauren Child, Andy Stanton and David Walliams. Walliams and Wilson are returning judges from last year, because they were so blown away by the range and creativity of the young authorial talent on display.

David Walliams will be joining Chris live in the studio on Friday as the climax to our launch week - last year he let slip that he'd be swimming the Thames for Sport Relief, for his sake we hope there's no similar revelation this year. Mr Evans also reprises his role as chair of judges after receiving glowing reviews for his performance last year from our independent adjudicator.

The original idea was born when Chris went to the Hay Festival in the Summer of 2010. Very pleasantly surprised by the inclusive family atmosphere that washed over him there, he decided he wanted to inspire the nation's kids to get writing. He also wanted the nation's teachers to get involved - acting as judges in our first round of adjudication. His production team promptly sprang into action.

Assistant Producer Day Macaskill and Radio 2 Interactive were faced with an epic conundrum - how to get hold of a piece of software that could not only accept every story submitted, but also keep personal information totally separate (in abidance with Child Protection regulations), then assign a totally random anonymised batch of stories to a teacher from a completely different geographical location to that of the children in their batch. It had never been done before.

We took expert advice from our colleagues at Blue Peter, who have been running similar competitions for children since the year dot; and Day and his able assistant Bethany Minelle hooked up with a very clever computer programmer called Pete Davison who designed us a bespoke monster of a database. Just as well really, as we were stunned to receive nearly 30,000 stories from children.

And with almost 2,000 teachers offering their marking services as well, we quickly realised we were going to have to employ several extra staff to deal with all aspects of processing the enormous beast this competition has become.

Then there was the small matter of an outside broadcast to organise - the Top 50 shortlisted authors were all invited with their families to the Hay Festival of Literature and the Arts, to watch a very special Radio 2 Breakfast Show go out live. Our judges had selected five finalists in each age category (9 and Under and 10-13), and an overall winner from each age range. Ten celebrities including the likes of Richard Hammond, Anne Robinson, Alex Jones and Alexandra Burke all made the trip to our little tent in a big field in the middle of Wales to read the winning stories aloud.

The atmosphere that morning was extraordinary.

Chris Evans described it as one of the most moving programmes he's ever been involved in - and the reaction the show received via text and email really did bear that out. We had truckers telling us they had pulled over at the side of the road in floods of tears, people unable to leave the house until they heard how a particular story concluded, and kids that were refusing to get out of the car at school, because they wanted to know which tale could possibly top the one they had just heard! It was a very different Radio 2 Breakfast Show that the nation woke up to that morning, but it was one we were all immensely proud to have been involved in.

So, to this year. We *think* we are in a much better state of preparedness for what may ensue over the next month (we close the competition on World Book Day - Thursday 1st March). This time around, every stage of the competition will be conducted completely online - including all the marking - so at least the printers at Western House can relax, even if no-one else can! And we have some juicy on air tie-ins with Newsround, Blue Peter, Radio 4 Extra and 6 Music to explore this time around as well.

To sum up, if you know someone aged thirteen or under who has a wicked and wild imagination, get them to check out the 500 WORDS website and have a bash at entering a story in our competition.

We know of 9 million people who can't wait to hear what they've got to say.