Editor's note: A few weeks ago Richard outlined a new mobile project bringing together the social web and live events that the A&Mi team would be testing out at Radio 1's Big Weekend. Here's the promised update on how things went - PM. 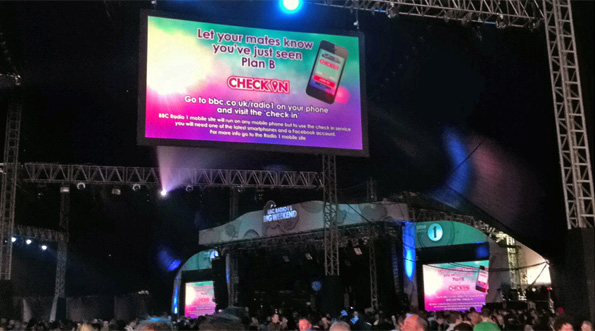 '...If you're taking someone who's not your boyfriend or girlfriend and you haven't told them that you have tickets, then don't check in...'
Radio 1 DJ Scott Mills on his show the day before the event.

The concept was to see if the audience at a live broadcast event would want to share their experience of what was happening on the stage in front of them with their social network. To make it even more interesting we'd be doing it in the technically challenging location of an airfield on the outskirts of Carlisle.

The challenge I was set was to find an engaging model for those at the event to link up with those who weren't and in essence to create a conversation around a piece of BBC content, in this case the Radio 1 Big Weekend festival.

As I arrived in Carlisle, my blood pressure rose on finding out that we had no connectivity via 3G at our hotel at all...even when standing on one leg with my phone in the air. Thankfully the coverage on site was much better due to the installation of three mobile operator's 3G boosters.

I then remembered that we had another location quirk to overcome. Temporary 3G boosters do not have any lat/long coordinates associated with them. As we had developed the prototype to detect a user's location firstly via WiFi, then 3G cell triangulation and finally a device's own GPS. I discovered that using 3G placed me over a mile away from my actual location.

As WiFi was not an option due to its limitations of concurrent users, it was down to my device GPS only. From conversations with users later on we realised that many people do not have GPS enabled all of the time due to its high power consumption.

After running some tests on the Friday and Saturday morning I realised that the page load time was a little slow due to the limited connectivity.

On some of the pages the key feature buttons were displaying before the whole page had finished loading which meant that people were pressing the 'check in here' button before all of the background location and sign in checks had been done. This then resulted in an error displaying even though a user had successfully checked in.

One way round this would have been to offer some bespoke content to get the audience to go to the prototype site prior to the event, so that the site could be cached on their phone thus reducing the load time when they got onsite...

The prototype was a 'mash-up' of BBC content feeds from our artist pages and Facebook as the publishing tool which resulted in a more complex technical design than we had originally hoped. The number of background checks to Facebook and the phones location caused some problems with the prototype such as the number of calls to the 'Places' API.

The success of the product early on the Saturday meant that the Facebook system thought we were spamming it. We were innovating with a live service which often has its unexpected challenges. Luckily we had support from Future Platforms and Facebook during the weekend so we did some live hacks, sorry 'updates', to iron out the issues we faced.

After a tense few hours working through some complex issues with the product and Facebook, we were back up and running smoothly. By around 5pm we saw the number of errors reduced and the check ins were on the up.

Thankfully, we had a different audience every day so we could start afresh. This is one reason why we used Radio 1's Big Weekend as a testing ground.

The next challenge was to find out what the audience thought about the product and the check in prototype as a whole. Did they get it? Was the reward of saying "I'm watching Lady Gaga" a good enough reason and could they see the difference in what we were doing to what other location based services did?

A research company carried out some qualitative research on the Sunday and some of the audience used a video diary to feedback what they thought.

Even though we had some initial teething issues, the research from the audience and on site analytics showed that the audience really liked sharing their unique experience with (or bragging to) their friends.

We had large interaction spike from the news story posts from seeing a high number of 'likes' and 'comments' on each of the check ins. This interaction was exactly what we were trying to achieve and it really worked. Interestingly, the stats also showed that more women engaged with the product rather than men - something that needs to be investigated further - does social syndication in this way appeal more to women than men?

The reason for developing this product was that we wanted the audience to share their experience of a live performance rather than just a location they were in. A simple design and simple user journey is a key factor in the success of any mobile product and from the feedback we believe we achieved that objective. It was however difficult to monitor how much of an impact the marketing had with the message that it was a new and exciting feature in comparison to the existing downloadable application.

So the technical challenges were identified, all of the audience surveyed told us that they liked it and the feedback was positive for this type of feature but many people were still very nervous when it comes down to sharing their location.

The BBC roadmap is not yet fixed but I can say that this was a successful experiment which I will be sharing with colleagues and the industry over the next few months. With smartphones overtaking PC purchases globally I am sure we will be seeing more and more location based services being developed, especially towards 2012.