Last night on PM I read out an email from listener Steve Andrews:

"Eddie. Curious fact. When the foreign exchange values are read out every day, no matter how the currencies have been performing the euro is always worth 87p. Why is this?"

Gavin Knoesen heard that and sent us this:

"As a currency trader I would like to send Eddie a chart to explain the listeners observation - with both technical and fundamental reasoning." 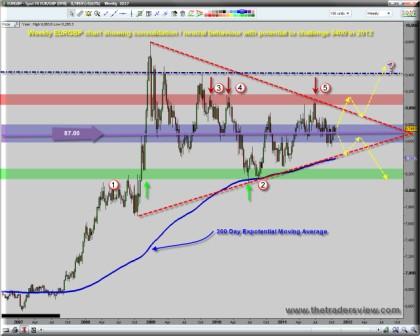 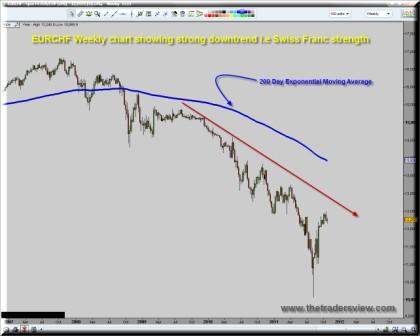 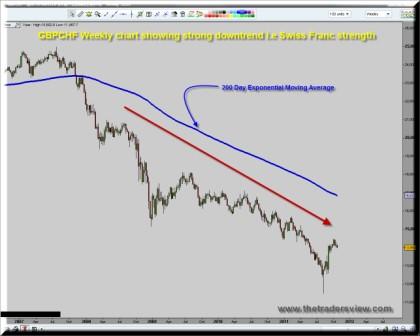 2) Once this area is overcome it is normal behaviour for the market to retest the previous "ceiling" which then becomes a "floor" or support.

3) For the larger part of the past three years price has oscillated between point 3,4,5 (red highlighted area) and 1,2 (the green highlighted area) the midpoint of this range is ultimately 87.00 (indicated by the solid purple line and shaded area). You can see that the apex of the triangle in which the pair is trading is also equal to the 87 to 87.50 area.

4) The yellow lines show the possible price movements however technically the market remains poised for a move higher i.e. Euro to gain strength over Sterling. This does not equate to the Euro necessarily gets stronger but rather a weakness in Sterling.

The blue line labelled as the 200 Day Exponential Moving Average is a closely watched by institutional traders and hedge funds for long term direction. In this case as price is above this average the assumption is that Sterling will in fact weaken against the Euro in the coming year."

Here is a link to a specially commissioned slideshow.