What did your relatives do in World War One?

Were you told stories? Are there letters or other treasures from that time that you keep as part of your family history?

Here's why I'm asking: In June 2007 Bill Lamin emailed iPM to say he was putting a cache of his grandfather's letter from world war one online. 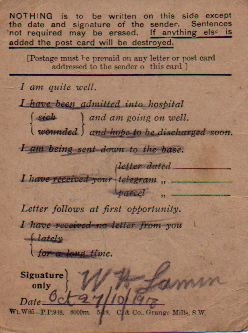 This is a photo of Harry Lamin's postcard to his family - dated 27th oct 1918. Looks innocuous enough - but his grandson Bill Lamin says the issuing of thse forms would have told Harry that "some serious action was imminent". With just days to go before the end of the war, Harry's unit went back into battle...we'll have more on PM tonight about Harry and Bill.

But as I say - what about YOU? What stories were YOU told about your family during the Great War? Feel free to share by clicking Comment below, or send an email to pm@bbc.co.uk.