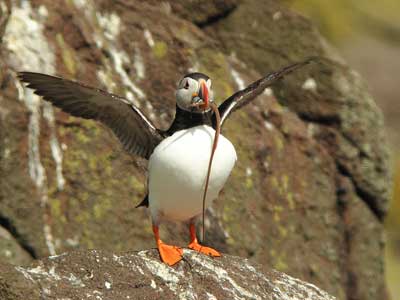 Sand Eels are on the way out and Snake Pipe Fish are on the way in - And the seabirds of the East Atlantic don't know what to do.
(Picture © Harry Scott) 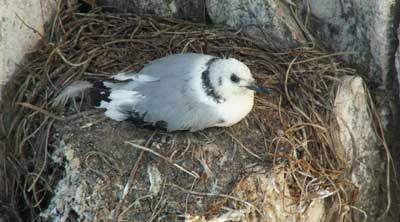 Sarah Wanless, Seabird Ecologist from CEH in Scotland has just told me about the demise of British Seabirds for PEuT. She stars in the third programme so listen out. She and colleagues have been studying the seabirds on the Isle of May in the Firth of Forth (North Sea) for umpteen bird generations. We hear that Sand Eels, the bottom dwelling (during part of their life) shoaling fish - and hugely important prey for many seabird species - are on the way out. Either heading north seeking colder water, out fished by fisheries or simply not surviving warmer sea water temperatures - or most likely a complex relationship of all three. The once very rare Snake Pipe Fish (a relative of the sea horse) seems now to be incredibly common in the north sea - And the sea birds are eating them. Trouble is, they are long and thin (look at the Puffin holding one) - don't have much fat on them and are covered in a hard exo-skeleton that neither the adults nor the chicks can swallow. Look at the Kittiwake - climate change is hitting these birds in all sorts of ways, but replacing one marine fish with another which is inedible is so bizarre. Sarah said that seabirds of all species, even the gulls, look at the pipe fish with curiousity - they don't know what to do with them.

To an outside observer of planet earth and the effect of the human race on the entire biosphere it must seem as obvious as a human scientist with a grant to study zebra or lions ?

Also when the observer downloads the research that human scientists are doing and evaluates human political social and economic systems and other data on human phisiology and physchology the parallel with the zebra study must be interesting.

Never mind the human research details because there is no indicator that will suggest that they (humans) have any ability to make the necessary adjustments to reduce their effect on the planets biosphere and reduce green house gase emmisions ?

i supose they will end their report with an evaluation of the lkely effect of the inevitable uncontrolled rise in green house gases ?

All this human scientific study and reporting is a waste of time because we have little or no ability to make the necessary changes ?

I would hope that you can produce either a theoretic analysis or measurements or some projection that would show me to be incorrect ?

The Zebra are perhaps better off since they would try and move to better grazing grounds unless of course humans destroy them ?

We found lots of Snake Pipefish skeletons amongst the wrack on Newark
and Scapa beaches (Orkney) this summer. There
were also reports in the local Press of seabirds having been seen dropping
live Pipepish back into the water at Newark.

As far as I know the Danes have been fishing sand eels (for fertiliser?) since the 1940s and extract thousands of tonnes from the north sea every year. Eel accounts for 27% of their total industrial scale offshore fishing and therefore ~300,000 tonnes out of the 1 million tonnes landed in 2003 (according to figures I got from the Danish govt. WEB site).

I don't think the relationship is that complex. It's been over fished for years, continues to be over fished and will be while there's money in it.

Goodness, I have just come across this blog, and here is one of Roberto's positive entries! I 'know' him from the pmblog.

I need a lot of time to catch up here. I am one of the terrified, both for myself (I live in a low lying area near the sea) and for my children and grandchildren.

My father used to say that we clutch onto the earth by our fingernails. And that was 50 years ago.

Why do you and others go on about "Planet Earth" being under threat? The planet itself is under no threat whatosever and will still be happily orbiting the Sun in hundreds of millions of years time. How long homo sapiens exists on it is quite another matter. Even then, as with the dinosaurs before us, I dare say something better will evolve eventually.

I've set up a site about recent research into the snake pipefish phenomenon, see:
https://fishnet.jrc.it/web/snakepipefish

Started filming these Filey Brigg in 2004 and have filmed explosion year by year plus breeding behaviour. So common birds drop them in the street.