Here's to World on The Move 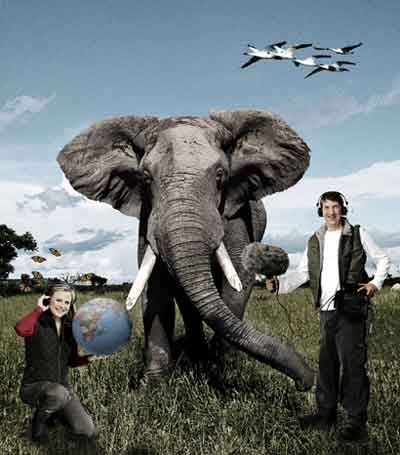 Update from Andy Byatt and Family 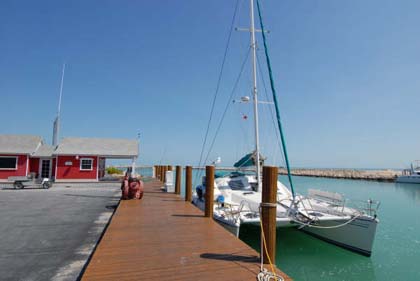 The thing about adventures is, you just never know what’s gonna happen next… it is an adventure, after all! So the big plan was to head off into the Caribbean and get south to Venezuela for the Hurricane season? Well, we did head for the Caribbean on the 5th of April and the 11th saw us moored by Great Harbour Cay, in the Berry Islands of the Bahamas. So far so good!

At 0530 am that morning the plan got fried. It was truly a wild and a windy night. Fierce. Lying at anchor in poor holding, whilst the furies swept over us, I refused to think of what would happen if we dragged. With one engine not working, we had the limited power of the one remaining engine should our anchor fail and over 40 knots of wind was grabbing at the yacht. It wasn’t pretty.

World on the Move - a note from far away

We at the Natural History Unit Radio Team are working on a big series for next year at the moment. It’s called World on the Move and it will follow the movements of animals around the world as they migrate and disperse. It’s a major event for BBC Radio 4 going out live every Tuesday at 11am from February 2008 - December 2008. 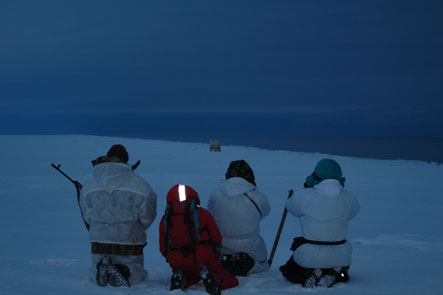 (Photo taken by Viktor Nikiforov/WWF - Tom Arnbom is the one in red, the others are like a white wall so that the male polar bear would not see him)

World on the Move reporter Tom Arnbom is out in Vankarem, Chukotka, north-east Russia at the moment with WWF's Polar Bear Patrol project.

Last year due to the lack of sea ice, polar bears were "trapped" on the peninsula where Vankarem is situated, waiting for the winter ice to freeze so that they could go out hunting on the sea ice after many months of starvation on land. Vankarem has about 150-200 inhabitants, and they had about 200 polar bears running around trying to find something to eat. Not a good combination - a couple of years ago a teenage girl was killed by a bear. So WWF together with the locals set up a “Bear Patrol”.

Tom’s out there this year to see what’s going on. He’s sent a note and these amazing pictures back. Here's what he wrote to me...

Continue reading "World on the Move - a note from far away"

Natural history film maker Andy Byatt took the ambitious step last year to travel around the world with his family aboard L’Aventura a Catamaran. Along the way he is recording his experiences and when he comes back we hope to feature these tales of wildlife and high seas in a radio programme, in the meantime he managed to get to an internet connection and just about get past the BBC email firewall/limit shenanigans to send us a blog entry or two, facinating stuff, they set off almost a year ago, over to Andy!

Remember Rutger Hauers classic scene in Blade Runner when, as a dying replicant in his final moments, he recalls the highlights of an extraordinary life with his adversary Harrison Ford? He says something to the effect “You can’t imagine the things I’ve seen, starships burning off Orion…” As he utters his last words you glimpse a brilliant universe far beyond the scope of normal human life. 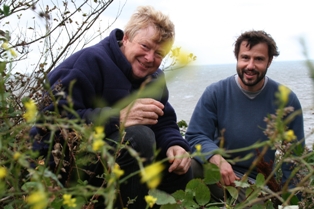 Could you survive for a year on food foraged from the wild? Fergus Drennan lived off the land for a month this summer. He emerged, he says, healthier and wealthier but can he really live for a year on a hedgerow harvest?
Dylan Winter went to find out:

'Fergus emerged from his terraced house in the back streets of Herne Bay eating the reddest juiciest apple I have seen outside of a fairy tale. He is a compact, energetic man in his early thirties and sports a neatly trimmed beard. In the hall of his terraced house is the bike that is his main tool for foraging. It gives him access to the woods, foreshores and parking lots within a five mile radius of his house. 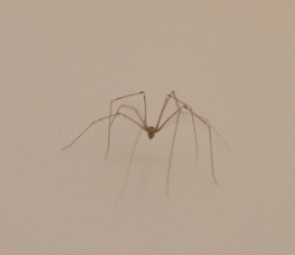 Dylan Winter is back with the Radio Four programme that gets you closer than ever to nature. The series starts on Friday October 12th and, as usual, we'd like your help with our stories. In the first programme we'll be asking for contributions to 'Bugs Britannica', a definitive portrait of Britain's insects. We're not just interested in their biology or their lifecycle. We really want to hear about the different names used for common insects up and down the country. We want to hear how their habits differ from Orkney to Truro. We need the tales, legends and traditions that surround them. 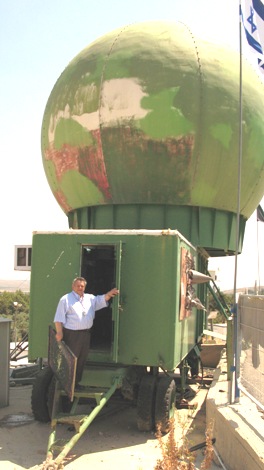 In a hot steel box on a dusty hillside in the heart of Israel Yossi Lesham and an ex-Russian general sit hunched over a radar screen. They're watching thousands of honey buzzards on their spring migration. 500 million birds cross Israeli airspace twice a year, airspace they share with the highest concentration of military aircraft in the world. The result can be very messy.

In the last edition of 'Wild Arabia', Tessa McGregor hears how Yossi's data helps Israeli, Jordanian and Turkish pilots save themselves, their planes and the region's birds. 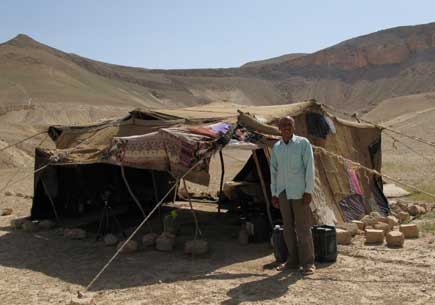 Tessa sent us an entry about her trip to the middle east as part of the series Wild Arabia, the final programme is on Monday at 9pm, (it will also be on our podcast) over to Tessa...

Syria Bald Ibis
Watching Northern,Bald Ibis feed in the Palmyra desert is a rare privilege and my heart soars as I watch them fly back to the colony at mid day. I’m spending the day with experts; local ranger, Mahmoud Abdullah, and Lubomir Peske, bird catcher and tagger ‘extraordinaire’. The tiny transmitters fitted to 4 adults last year unlocked the mystery of their migration route. – all the way from their summer breeding grounds in Syria to their winter feeding grounds in Ethiopia, crossing the Middle East and Arabia on their way, but where the young birds spend the winter is still a mystery. Catching adult birds was difficult enough, but catching a young bird is the Herculean task facing Lubomir now.

Wild Arabia 2: Blood On The Sand 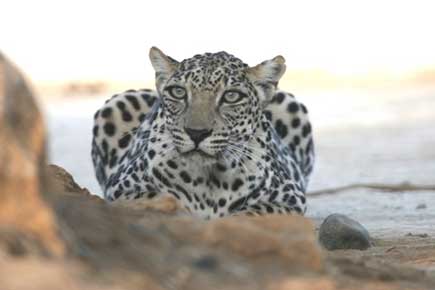 The destruction of Arabia's large mammals was accomplished with startling efficiency. As soon as four-wheel drive vehicles and accurate rifles arrived in the region they were doomed. Arabian Lion, Cheetah, Wild Ass and Saudi Gazelle disappeared forever. Arabian Tahr, Arabian Oryx, Sand and Mountain Gazelle and Arabian Leopard were restricted to the highest mountains or private reserves.

In the second edition of 'Wild Arabia' Tessa McGregor hears how Arabic hunting culture, urban development and regular conflict have combined to push so much wildlife over the edge. 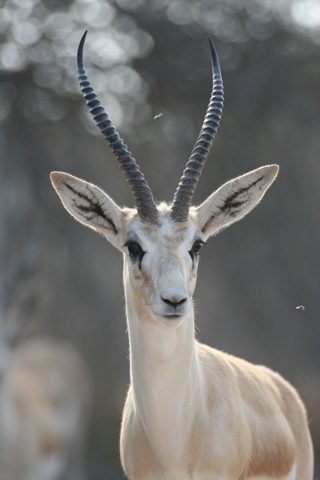 Wild Arabia kicks off at nine o'clock on Monday 20th August with an in-depth look at the ways that wildlife adapts to survive in some of the harshes conditions on earth. From the depths of the Dead Sea to the edge of the Empty Quarter biologist, Tessa McGregor will be travelling throughout the region in search of some of the most elusive animals on Earth.

Stunning Photos From the Iraqi Marshes 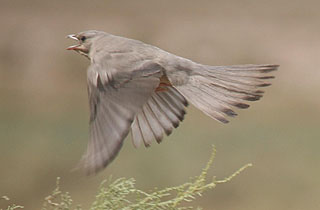 When we suggested a trip to the Mesopotamian marshes for 'Wild Arabia' the BBC's safety advisors were not amused. Not only would we have to attend a 'hostile environment' course (a week in a conference centre being shouted at by ex-SAS officers) but we wouldn't be allowed to move without a posse of armed guards.

The Birth of the Big Orange 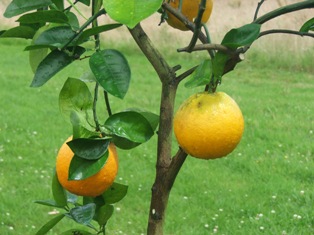 It's funny where programme ideas come from. Whilst researching the life and times of Sir Percy Fitzpatrick, the author of "Jock of the Bushveld", for a half hour feature programme I was making called "Percy and Jock: One Man and His Dog", I discovered that amongst his many talents, Fitzpatrick had played a key role in the development of the citrus industry in South Africa. More interestingly, I discovered that in 1922 he'd been presented by a very important tree stump from California. I was intrigued...so started to trace back the story of this tree to find out why it was so important - it was referred to as the Parent Washington Navel Orange Tree..and on Sunday 19th August at 2.45pm you can listen to the fascinating and charming history of "The Birth of the Big Orange".

Continue reading "The Birth of the Big Orange" 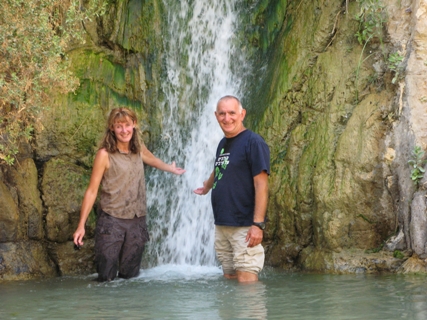 High above the Dead Sea sits the field school at Ein Gedi. Run by the Society for the Protection of Nature in Israel (SPNI) the school educates young Israelis on the richness of the desert environment. Four springs feed Ein Gedi, a beautiful oasis in the Judean Desert, irresistible to wildlife. Tessa stayed at the school whilst recording interviews for 'Wild Arabia'. 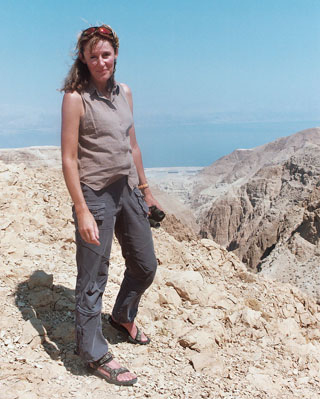 The presenter of 'Wild Arabia', Tessa McGregor has been travelling through Israel, Syria, the United Arab Emirates and the Palestinian Territories. Today she reports from Ein Gedi at the southern tip of the Dead Sea, romantic location from the 'Song of Songs' ("My beloved is unto me as a cluster of henna flowers in the vineyards of Ein Gedi") and wildlife hotspot.... 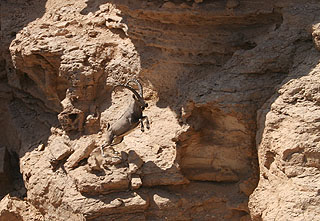 Pulling Arabia’s wildlife back from the brink is the job of the King Khalid Wildlife Research Centre near Riyadh. The centre is run by the Saudi government in collaboration with our own Zoological Society of London. Here they use the latest genetic techniques to build up viable groups of local endangered species which are then released into large protected areas.