Somalia's search for a lucky break

As you flick on your television to watch England take on Spain on Saturday, you may like to thank your lucky stars for being able to follow the game so easily.

It's second nature - a ritual almost without thought - as is playing football for most of the world's enthusiasts. But would you risk your life to carry out either pastime?

I only ask because they do in Somalia, which is why you might like to root for their embattled footballers on Saturday - especially if you have Britain's traditional fondness for the underdog.

Because there can be few teams with the odds more stacked against them than the collection of individuals who face a daily fight just to play the game - often having to disguise their intentions to do so. 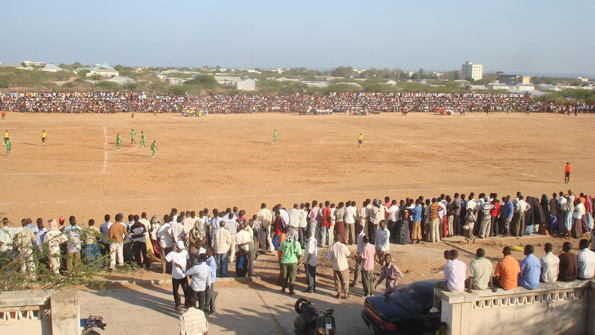 Football is hugely popular in Somalia despite the numerous challenges affecting both the watching and playing of the game.

Saturday marks the beginning of Somalia's 2014 World Cup adventure, although just making it to the start line for their preliminary qualifier against Ethiopia is creditworthy enough.

The Somalis' 'home leg' will actually be played in Djibouti though because Somalia - widely described as a failed state and without an effective government in two decades - is considered too dangerous to host matches.

Living in the middle of a war zone is the first hurdle for Somalia's footballers. It was one which Under-20 starlet Abdi Salaan Mohamed Ali was unable to overcome in February, after he became the tragic victim of a suicide bomber after leaving training one day.

Then there's the mere challenge of just being able to play football at all.

For notwithstanding the country's drought, famine and political instability, the game is outlawed in many parts of Somalia by the militant Islamist group al-Shabab, which has links to al-Qaeda.

And despite the heavy involvement of many of the world's Muslim nations in national and international football, playing football in Somalia is fraught with danger.

"It was four years ago that they described football as unIslamic or Satanic," says Shafi'i Mohyaddin Abokar, the Somali Football Federation (SFF) press officer. "According to the Islamists, football is totally banned in Somalia - as it is something that steers the young people away from the path of Islam."

So much so that Somalia is a place where al-Shabab cannot even tolerate people watching the game on television.

Those Somalis wishing to play football, especially the ones who have to travel in from al-Shabab controlled areas, go to extraordinary lengths to play.

They regularly hide their football kits under Islamic dress as they cross checkpoints into the government-controlled areas, so that no militant will discover their real intention.

"That's the culture - because the young players want to train and play," says the SFF's secretary general, Abdi Qani. "Normally, every place in Mogadishu or Somalia is a risk but the objective of the young generation is to play or watch or support football - that is the aim."

Football in Somalia is exceptionally popular - some estimating that 85-90% of the population love the game.

And those who run Somali football display unbridled passion as they work tirelessly to ensure the game can continue, often at sizeable personal cost both in terms of time and money.

Qani has spent much of his recent time trying to raise cash from the Somali diaspora on sponsorship crusades in Europe. 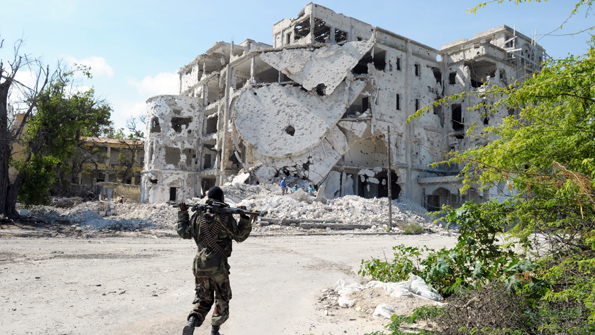 Mogadishu has been decimated by the many years of fighting, which have made investment in sport a low priority for a government battling insurgency, drought and famine

Because without governmental support and a wholesale absence of sponsorship, the SFF survives on the annual US$250,000 (£157,000) grant that every national association receives from Fifa - but which many dismiss as chicken feed (Brazil's sponsorship deal is worth over US$100m).

Victory over Ethiopia would take Somalia into a financially-crippling qualifying group that would involve trips to South Africa, Botswana and Central African Republic. I asked Qani the faintly-absurd question of whether he actually wants to win the two-legged play-off.

"We're 100% committed to winning and if we do win, we're preparing to ask Fifa and the Confederation of African Football for special financial support for Somalia," he replied.

As athletes like former world 1500m champion Abdi Bile and Somali-born British athlete Mo Farah have proved, and footballers like Chelsea teenager Islam Feruz may do in future, there is real talent in Somalia.

There is also a devotion to sport that almost beggars belief.

Earlier this year, al-Shabab called the captain of the Somali women's basketball team to give her a choice - either stop playing basketball or be killed - with Islamists having issued an order back in 2006 which banned Somali women from playing sport.

"I will only die when my life runs out - no one can kill me but Allah," responded a defiant Suweys Ali Jama, who is currently preparing for December's Arab Games in Qatar. "I will never stop my profession while I am still alive."

Her words echoed those of fellow basketball players who received similar death threats when contesting a regional tournament in Kenya, with the team's male coach saying: "I am ready to die in Mogadishu for the reason that I have participated in this tournament."

And after the death of under-20 player Abdi Salaan Mohamed Ali earlier this year, the president of the Somali Football Federation reacted by saying: "we are committed to continuing our duty in the war-torn country until we meet death."

They are comments and attitudes which put England's clash with Spain into real perspective.