Why does the West dominate African football? 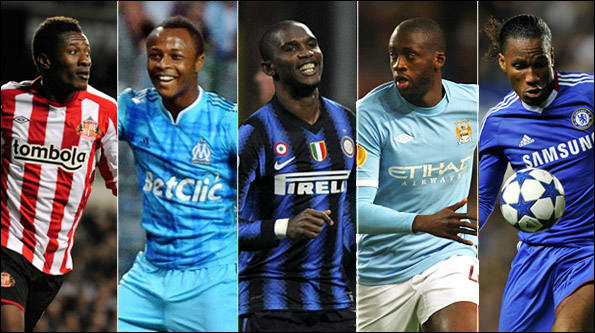 Gyan, Ayew, Eto'o, Toure and Drogba have been nominated for the BBC African Footballer of 2010

The BBC shortlist for the 2010 African Footballer of the Year has underlined West Africa's dominance of such awards - because around three-quarters of winners of both the BBC and Confederation of African Football (Caf) accolades hail from the region.

Liberia's George Weah, meanwhile, is the only African to be crowned Fifa World Player of the Year.

Weah also won the BBC award in 1995 and this year, another West African will join him - with Drogba and Eto'o joined on the shortlist by Yaya Toure, Asamoah Gyan and Andre 'Dede' Ayew.

And it's not just a matter of a few talented individuals - look at the results and you will also see that West Africa's footballing pre-eminence is unquestionable:

Cameroon, Senegal and Ghana are Africa's only ever World Cup quarter-finalists; Nigeria and Cameroon are the continent's sole winners of Olympic gold, while Nigeria and Ghana share six Fifa world titles at U17 and U20 level.

So what explains this superiority?

"Such dominance always comes down to genetics and environmental arguments," sports scientist Tim Noakes told me on the line from Cape Town.

"West Africans are bigger and stronger than the rest of the continent - with the world's best sprinters originating from the area."

"East Africans are of course the distance runners - with a much smaller, lighter frame and the southern and northern Africans largely share that build.

"But West Africans' physical attributes would mean nothing unless there's also the right environment and sportsmen train hard."

Football wannabes exert themselves across all Africa but the eastern and southern regions, despite huge enthusiasm for football, still trail far behind.

East Africa has never qualified for a World Cup and its two Nations Cup titles would seem paltry - until compared to southern Africa's solitary win, although former champions Bafana Bafana are one of two World Cup qualifiers from the region.

So how have Egypt - whose players have physiques which are nowhere near as powerful as many West Africans - won seven Nations Cups, three more than anyone else?

"Egyptians compete successfully because they're doing something different," Noakes explains.

He believes they compensate for their lighter frames with superior ball skills, much as players like Lionel Messi, Xavi and Steven Pienaar, to given an African example, are doing.

But interestingly, despite the Nations Cup victories, an Egyptian player has won just one Caf best player title and two for the BBC (the latter differing in that it is voted for by fans rather than national coaches). 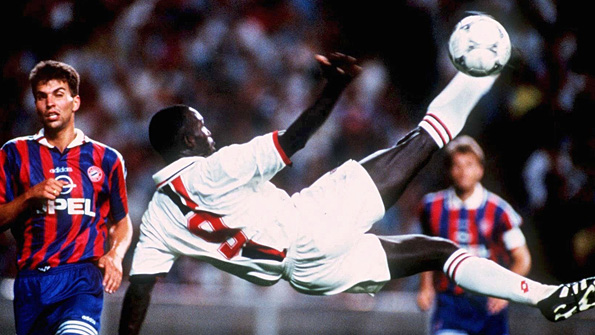 A West African, Liberia's George Weah, is the only player from the continent to have been crowned Fifa World Footballer of the Year (in 1995)

In 1998, Morocco's Mustapha Hadji won both - and he is, remarkably, the only non-West African to have won the Caf title in 21 years.

"I don't know if I'm surprised by this," the former Aston Villa, Coventry City and Deportivo La Coruna star told the BBC's African sports programme Fast Track. "Nearly all Egyptians play at home so the media and public elsewhere can seldom watch them."

With impressive facilities and salaries, many Pharaohs, even those as talented as Mohamed Aboutreika, show little willingness to go abroad.

"In Kenya, we only have one Fifa-approved agent and right now he's relocated to Australia," says football official Hussein Swaleh. "We know very few agents - one in France, one in Sweden and one in Qatar - and have none in England because no one's interested in Kenya."

This makes it hard for an African from such a country, and over 70% of African nations fall outside this stipulation, to win a contract with a top European side, meaning the cycle of failure goes on - while West Africa is awash with both agents and academies.

Agreeing that West Africans are far stronger physically, Hadji believes it's not the only area where the region boasts an advantage.

"Mentally, West Africans are stronger than us and I'm still unsure why North Africans don't have as much hunger or give up quicker than others," he says. "Our skill levels are the same but it's mentality that makes the difference."

There's no doubting the mental fortitude of some West Africans.

Ghana's Sammy Kuffuor, who won the BBC award in 2001, is a good example of a player who maximised his innate skills to reach the top, eventually winning several German titles and a Champions League with Bayern Munich.

"When I joined Bayern (aged 17), I faced a very big challenge as there were five or so German internationals in my position," he tells the BBC. "So I had to get psyched in my mind to reach the top and, as a young boy from Africa, needed to give 150% to get to the first team.

"But I always knew I would make it as I was so determined."

And maybe that determination also came from seeing a fellow Ghanaian like Abedi Pele shining on the world stage.

"The goal of many young children is to be like their country's great heroes," says Noakes.

"And if they've already seen it happen, that makes a massive difference and it is far likelier that it will also happen for them."

To vote for your BBC African Footballer of 2010, click here.