Amid the hullabaloo surrounding Jose Mourinho's return to Chelsea on Tuesday, there was one player at Stamford Bridge who also has claims to be a 'special one'.

The moment may have gone unnoticed in London but not in Nairobi where McDonald Mariga's mum was blowing, yes, a vuvuzela as her son became the first Kenya - and the first East African - to play in the Champions League.

Matilda Mariga, whose husband Noah is a former Kenya international, was at home in their apartment (paid for by the Inter Milan player) as 15-20 friends and neighbours squeezed in to watch one of the building's few satelliteTVs.

And just five minutes from time, they were all jumping around when Mariga, 22, finally made his appearnace as a substitute for the excellent Wesley Sneijder.

"People are so excited here. On Tuesday, fans were rushing to watch the match as if they were Inter fans and every day now, you see Inter's news in our papers even though English football is far more popular," said John Nene, a Nairobi-based sports reporter for the BBC 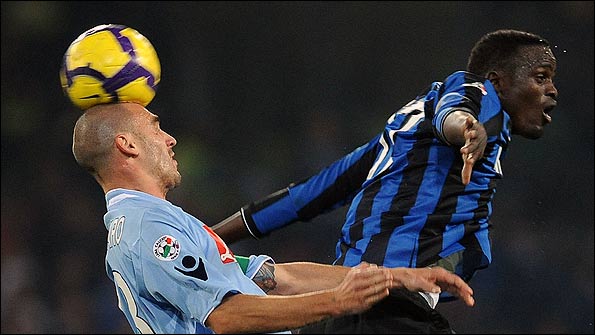 Matilda and Noah, a winger who banged in the goals for the Harambee Stars in the 70s and 80s, are understandably excited to see their son become the first Kenyan playing in one of Europe's top leagues.

There is also huge interest in neighbouring, and equally football-mad, Uganda because real hopes exist that a player from Africa's footballing eastern backwaters can spearhead a change, which one former Kenya coach - contrary to conventional wisdom - believes is possible.

"There are many Marigas in Kenya," says Jacob 'Ghost' Mulee. "We were just waiting for someone to break the ice and show we can be known for something other than running."

When you talk about Kenyan sports stars, athletes like Kip Keino, John Ngugi and Paul Tergat understandably hog the limelight.

But Mariga is breaking the ice is doing so in spectacular style, having joined Inter from Parma in a four-year deal after work permit complications prevented a move to mega-rich Manchester City.

So impressive were the tall midfielder's displays for a yo-yo'ing Parma side that he was also linked with City's neighbours Man Utd and AC Milan before signing for Inter.

"Mariga's a very interesting player," said president Massimo Moratti. "He's young and can do very well. It's the best thing that could have happened to us in the winter transfer market."

So, just who is Mariga? Well, after playing for some of Kenya's top sides while in his mid-teens, he made it to Parma via Sweden where he shone for Helsingborgs - despite winter training in sub-zero temperatures.

By all accounts, he's incredibly down-to-earth and humble, a contrast to his fellow Africans at Inter, Samuel Eto'o and Sulley Muntari - but his shyness turns to steely single-mindedness on the field.

Like many Africans signed by European clubs, the names of Michael Essien, Mahamadou Diarra, Yaya Toure and John Mikel Obi immediately spring to mind, Mariga is a defensive midfielder.

He was reportedly bought to replace Patrick Vieira, the Senegal-born Frenth international, abnd certainly shares Vieira's physique at 6ft 2ins tall. But if he is to start regularly for Inter, he must force his way into a midfield containing Sneijder, Esteban Cambiasso, Sulley Muntari, Thiago Motta and Dejan Stankovic. 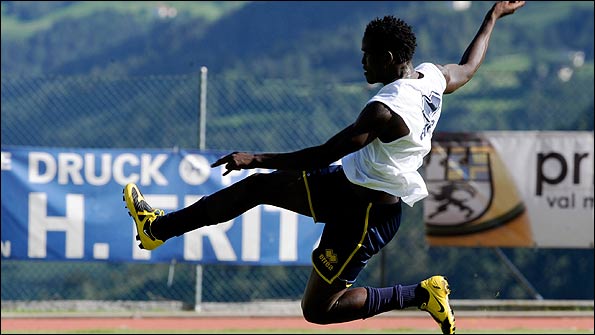 Mariga is a competent tackler, has a good engine and covers plenty of ground with his long lolloping stride, but when I saw him in the flesh six months ago, playing for Kenya as they lost a World Cup qualifier in Mozambique, he looked a bit raw.

"Even though he's at Inter, I still think he's got a bit of a way to go," says Finland's English manager Stuart Baxter, who coached Mariga at Helsingborgs.

"I do see similarities with Vieira because 'Macca' has a very powerful game, looks marvellous when moving forward with the ball, is difficult to knock off the ball and for a big lad he has both good passing and balance.

"But he's got to decide whether he wants to be a box-to-box player like Vieira or whether to focus on breaking up the play so that he can knock Cambiasso out of the side."

Either way, he's in the right place, being guided by Mourinho and backed by his team-mates, and having warmed the bench throughout the first leg against Chelsea in the San Siro, he was delighted to get his chance as Inter completed a 3-1 aggregate victory in London.

"What began as a dream has become reality. This is the world's biggest club competition and making a Champions League debut against a top side like Chelsea is wonderful - I really enjoyed myself," Mariga told Kenyan media.

"I was a bit nervous about being the new boy in the squad but everyone made me feel at home. This is just a starting point - all I think about is doing better in each game and hoping to get more playing minutes."

The whole of East Africa also hopes he does, with Kenya's Daily Nation newspaper stating: "Mariga ... somehow manages to bring hope to many a person in a land brimming with talent but bedevilled with greed - the latter always thwarting the former."

If that sounds negative, it's because it's impossible to overstate the depths of underachievement from this oft-ignored corner of African football - one which seldom hits the headlines.

No East African nation has ever contested a World Cup, only three countries have travelled to the biennial Africa Cup of Nations in the last 18 years - and in nearly a half-century, only two East African sides have ever won a CAF club title.

In addition, Kenyan football has chronic administrative issues - with two bodies claiming to run the game - and is cash-strapped.

But Mulee believes Mariga's success could be the catalyst for change - and an increasing number of scouts are now being drawn to Kenya.

"When he nearly joined Man City, parents were telling their kids to play football and now he's turning out for Inter that interest is doubling," he said.

"Kenyans are beginning to realise that you can make a living through football, and Mariga is inspiring many to play in Europe - as there's now the belief that if he can make it, then others can surely follow."