Sunday's Africa Cup of Nations in Angola kicks off a momentous year of football, particularly for Africa, but also provides lovers of the tournament with their biennial fix.

For this burst of colour and sunshine amidst the freezing European winter always entertains, delighting both Africans and neutrals with its intoxicating mix of spectacular football, colourful fans and hard-to-believe incidents.

More carefree than the World Cup, more colourful than the European Championships, the Nations Cup has come into its own in recent years - with Ghana 2008 having left fans salivating for more.

There were a highest-ever tally of goals (99 - including such stunners as Manucho against Egypt and Sulley Muntari against Guinea), traditionally wild tackles, extravagant haircuts (as always seen at Nations Cups), wonderful fans (my favourite being the Togolese Viking) and endless on-field drama. 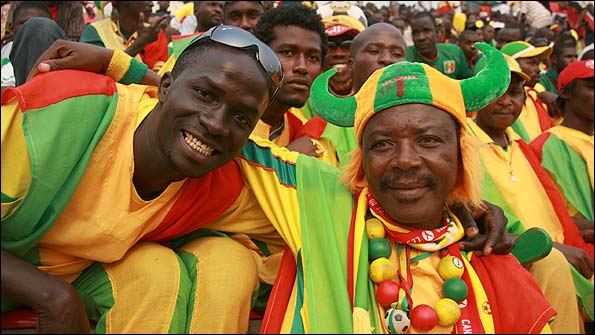 The Togolese Viking provides a colourful addition to the tournament

Then there were the traditional off-field antics - the squabbles in camps vying alongside the impossible-to-explain. For how exactly will Cameroon's, and Burnley's, Andre Bikey tell his children he missed perhaps the only Nations Cup final of his career through suspension after... shoving over a medical officer who was treating a team-mate?

When I once quizzed him why, the affable defender flashed a knowing smile before saying it was something he preferred not to talk about!
Bikey will be back, but can his Indomitable Lions - or any other nation - become the first non-North African winners since 2002?

Leading the charge in dust-cloud style are Ivory Coast's Elephants, with Cameroon themselves, Ghana, Nigeria and defending champions Egypt the following pack.

My favourites, admittedly everyone else's too, are the Ivorians, who face Ghana, Togo and Burkina Faso in a tough Group B. But this is surely the last chance for the Didier Drogba, Kolo and Yaya Toure, Didier Zokora and Emmanuel Eboue generation to win some silverware.

Although they fell late on in both 2006 and 2008, I believe the World Cup finalists can win their first title since 1992 - mainly thanks to Drogba's powerful inspiration, for now 31, you sense this is the big one for a man who's hinted it may be his Nations Cup swansong.

Yet what makes Angola fascinating is the fact that there are more dark horses than usual chasing the Elephants' storm-cloud.

What about Mali, whose recent feats belie a squad boasting Momo Sissoko (Juventus), Seydou Keita (Barcelona), Frederic Kanoute (Seville) and Mahamadou Diarra (Real Madrid)? Nigerian coach Stephen Keshi knows the African game inside out, has worked previous miracles when leading tiny Togo to the 2006 World Cup (ably assisted by Emmanuel Adebayor) and is confident ahead of a tournament that has often given him trouble (see E Adebayor again).

Then the southern African sides must surely make an impression in only the region's second ever finals. It's time for under-achieving Zambia to come to the party, while the well-drilled Mozambicans punch above their weight - with winger Elias Palembe definitely one to watch, always having time on the ball despite his slender stature.

But perhaps the strongest dark horses come from hosts Angola, Gabon or Burkina Faso's (aptly-named) Stallions. The Burkinabe are spearheaded by Moumouni Dagano, 28, another to follow, for the Qatar-based striker outscored both Drogba and Eto'o in qualifying and this is his big chance to land a major move. 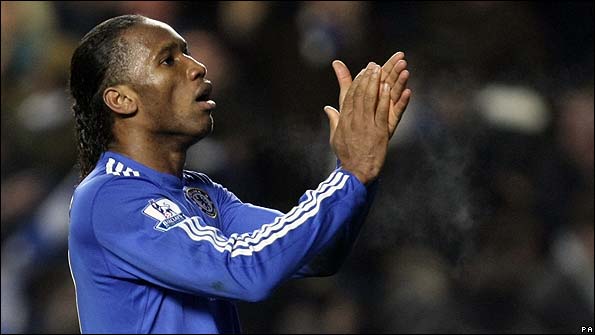 Chelsea's Didier Drogba will be key for the Ivory Coast

Gabon, meanwhile, flew off the blocks in World Cup qualifying before coming back to earth and if coach Alain Giresse can rediscover that form, Daniel Cousin and co. could spring a surprise against Zambia, Cameroon and Tunisia in Group D.

Finally, the hosts will surely overcome their status as the tournament's lowest ranked side. Locals are pessimistic but the team's redeeming feature is Portuguese coach Manuel Jose, all-conquering with Cairo giants Al Ahly when winning 3 African Champions Leagues. He can get the best out of a limited side, especially when home advantage is so key in the Nations Cup (the hosts having won 11 of 26 finals).

Angola open against Mali on Sunday, with Malawi and Algeria making up Group A. Despite their roller-coaster exploits in reaching South Africa, few expect England's World Cup opponents to go far so they'll be intriguing to watch - and test the patience of Fabio Capello's scouts should they trek to Angola's war-ravaged infrastructure and steamy climes.

Now to the favourites.
Nigeria are always touted but John Mikel Obi, Obafemi Martins, Yakubu and Joseph Yobo are not playing like champions. Yes, they were unbeaten when qualifying for South Africa 2010 but they were sluggish too, and Shaibu Amodu is the most under-pressure coach of any World Cup finalist - a job he can kiss goodbye if he doesn't make the semis. His side are, dare one say it, boring to watch at times but then their undoubted talent is no match for the Okocha, Amokachi and Ikpeba generation.

This could also apply to Ghana's Group B rivals for the Black Stars have been hit by the absences of Stephen Appiah, John Mensah, John Paintsil and Sulley Muntari - leaving the onus on Michael Essien to deliver. He'll be helped by stars from the victorious U20 world championship side, like the burgeoining Dominic Adiyiah, but hopes of winning their first title in 28, yes 28 years, now seem strained.

Underlying Angola 2010 is a potential volcano which could light up the finals - for Eto'o, the highest scorer in Nations Cup history, wants to surpass the nine goals scored in a finals (by Congolese Mulamba Ndiaye in 1974) and should he go close, is Drogba going to let that happen without a fight?

Africa's two leading strikers of their generation can row all day about who is best, following their impressive club achievements, but their international records contrast in one crucial area - namely, Eto'o having won one Olympic and two Nations Cup medals while Drogba's cupboard is empty.

Surely it's time to fill it, but the Indomitable Lions, roaring forward under Frenchman Paul Le Guen and facing Gabon, Zambia and an uninspiring Tunisia in Group D, are their main obstacle. The red-hot coach has revitalised a squad bursting with talent and on the rise - Eto'o captaining a new generation of Alex Song, Jean Makoun, Stephane Mbia, Achille Emana built upon a fine goalkeeper, Espanyol's Carlos Kameni.

So Cameroon to meet Ivory Coast in the final on 31 January, Drogba v Eto'o once again (is this merely wishful thinking?) and the Elephants to top a fierce battle which, to paraphrase an African proverb, will see the grass suffer.

But don't take my word for it. My fellow journalists seem to be thinking along the same lines...