Not since Buckingham Palace took so long to respond Princess Diana's death in 1997 has an organisation so badly misjudged the mood of the public.

For the decision by the Confederation of African Football (Caf) to expel Togo from the next two Africa Cup of Nations - following their Angola 2010 withdrawal after their team bus was machine-gunned (with two team officials dying) - is simply jaw-dropping.

Before we get into the whys and wherefores, let's just clarify why the Togolese have been suspended. In the statement they released on Saturday, Caf said the following...

'Following a decision taken by players to participate in the competition, the Togolese government decided to call back their national team. The decision taken by the political authorities is infringing Caf and [Nations Cup] regulations. Therefore, a decision has been taken to suspend Togo for the next two editions.'

For their woes, the Togolese federation was also fined US$50,000 - as Caf twisted the knife.

In the same statement, Caf says it understands the players' decision not to participate in the competition but the African ruling body's insensitivity is still staggering. 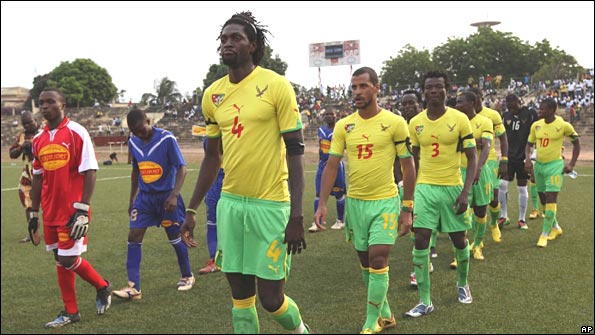 Togo played a friendly against Togo Media, 15 January, to honour those who were killed

Some will argue Nations Cup regulations - Article 78 specifies such a punishment for teams withdrawing shortly before the competition - were simply being obeyed but just down the page, Article 80 will tolerate withdrawals 'in cases of force majeure accepted by Caf'.

Force majeure allows for an extraordinary event or circumstance, which the incident in the northern Angolan province of Cabinda on 8 January certainly was - with the Togo bus being attacked by rebels linked to the Front for the Liberation of the Enclave of Cabinda.

When I asked Caf President Issa Hayatou earlier this month whether he regretted bringing the Nations Cup to Angola following the Togolese tragedy, his answer was enlightening.

For the Cameroonian proceeded to explain that there was no real problem having only three teams in Group B after Togo's withdrawal as it had happened before (when Nigeria withdrew from South Africa in 1996).

At that point, an aide came over to explain that the question had actually been about the deaths - whereupon Hayatou addressed the attack with little empathy.

On Friday, he expanded further - saying Caf had denied Togo's request to re-join the tournament after three days of mourning because satellites used for broadcasting had already been pre-arranged, one of a litany of excuses which didn't seem to hold water.

And while words such as 'cruel' and 'inhumane' are already being applied by football fans to the decision - 'stupid' has also followed.

Because whether you agree or disagree with the decision, its timing beggars belief.

Caf argues that the African game doesn't get the coverage it deserves - but how is Sunday's Nations Cup final between Egypt and Ghana going to be about football when announcing this decision 24 hours beforehand?

Even while this tournament has progressed and become about the football, there was always the feeling that the Cabinda attack, which took place 48 hours before the opening game, would overshadow it.

Now it certainly will, as Caf reignited a fading ember at the worst moment.

Caf says it wants to give Togo time to appeal with the draw for 2012 Nations Cup qualifying looming - but they are still ensuring the final, like the opener, is coming second.

Inside talk suggests this is a political spat between the Togolese government, its football federation and Caf, who had a war of words with Prime Minister Gilbert Huongbo when the team withdrew.

And if this is indeed the case, this issue should not be used as a political pawn.

Especially in African football's biggest ever year as the planet's eyes turn to South Africa ahead of the continent's first staging of the World Cup, now just over four months away.

Amidst the fall-out, there will be chat about whether Hayatou, who has held his post for 22 years, is still fit to govern Caf - a question his army of critics will seize upon.

In an interview given to the BBC, Caf claims to be protecting the future of African football by adhering to tournament rules.

But how are they helping the next generation of Togolese players by giving them no continental championship to play for - and at least two years without competition until the 2014 World Cup qualifying comes around?

Personally, I'd be intrigued to know the thoughts of reserve goalkeeper Kodjovi Obilale who, lying in a Johannesburg hospital with a bullet lodged near his spine, is now being told that even if he does play football again, he'll be unable to compete in the next two Nations Cups.

Total madness - and I'm sure many of you will join me in hoping Togo's appeal will succeed.