An entertaining start to the Nations Cup

Anyone fancying a flutter on an African team to do the unthinkable and win this year's World Cup may be thinking twice about dipping into their pocket after the first round of matches in the Nations Cup.

Of course, South Africa-bound Ghana are still to play a game in Angola after their Group B opener against Togo was cancelled. Togo's departure (or, seemingly insensitively, 'disqualification' by Caf) followed last Friday's attack on their team bus that left three people dead.

On the pitch, the football has been entertaining, with several shock results, while the crowds and organisation have been reassuringly healthy. 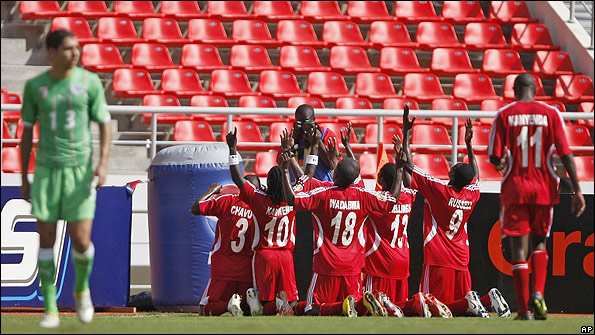 Malawi celebrate after scoring in their shock win over Algeria

I've even read Gabonese officials praising Angola's hosting skills as being a model for the future, words that resonate ever louder since most Nations Cup organisers usually only deal with a truckload of complaints.

That said, there are - just as there are always seem to be (e.g. Ghana 2008, Mali 2002) - complaints about the pitches, especially the way those in Luanda and Cabinda cut up so easily, but it hasn't stopped them delivering some fine games.

Take Luanda's 11 November Stadium, the venue for the tournament's first game on Sunday. After the spectacular firework display came the unforgettable 4-4 draw between Angola and Mali.

Angola coach Manuel Jose, who has been round the block in African football (he is also credited with launching Luis Figo's career when both were at Sporting Lisbon), blamed the draw - after his side led 4-1 with two minutes left - on a lack of fitness, so the pressure is on in their remaining matches against Malawi and Algeria.

On Monday, the drama continued with one of African football's biggest upsets in recent history. Malawi's Flames, who aren't even ranked in Africa's top 20 by Fifa, were appropriately red-hot as they thumped England's World Cup opponents Algeria 3-0.

As I said last week, the appeal of this Nations Cup is the presence of so many outsiders. Although I certainly didn't expect Malawi to be one of those, the tournament still seems wonderfully open, especially should Ivory Coast (my tip!) crash out early, as is possible.

Malawi's maiden Nations Cup win sparked wild celebrations at home. I'm told that shops reduced the prices on their goods, while taxis and buses were offering passengers rides for free, as the nation partied.

It's a shame, though, that no one was there to see their historic victory, with ground staff and reporters arguably outnumbering supporters at the match, with just 500 fans watching in a stadium that had held 50,000 frenzied Angolans the night before.

In truth, this was the tournament's only game to kick off so early (at 1445 local time: the rest being 1700 or 1930) - and crowds have been good since, especially as Nations Cup games tend to be poorly attended if they don't involve the host. Angolans are clearly revelling in the chance to watch Africa's biggest stars.

This devotion is clear from the hundreds who turned up at Cabinda airport last week just to catch a glimpse of Didier Drogba, while there was a full house in Lubango on Wednesday as Gabon stunned World Cup-bound Cameroon 1-0. 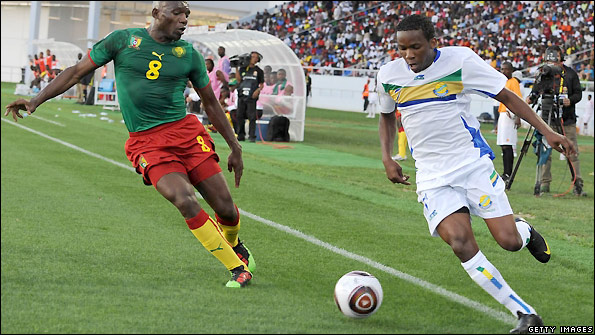 Gabon entertained with their win over Cameroon

Some will say the victory came too late (Gabon might have been in South Africa themselves had they beaten Paul Le Guen's side in World Cup qualifying last year), but it was a triumph for Alain Giresse, part of France's legendary 1984 European champions.

In 2008, two years after taking up the Gabon post, Giresse quit because of security fears but he was persuaded to stay by the government and has since taken Gabonese football to rare heights (up to 48th in the Fifa rankings after they were 104th when he took charge).

Indeed, this Nations Cup is showcasing African football's strength in depth, for both Malawi and Gabon, for whom goalkeeper Ovono Ebang has excelled, were superb value for their wins, while Zambia, Angola and Mali have also shown moments of real quality.

Now, though, it's time for the big guns to deliver. Following Togo's withdrawal, Group B's next match has incredibly high stakes. Should Ghana beat Ivory Coast on Friday, the favourites will be out barring a sizeable win for Burkina Faso over the Black Stars next Monday.

Friday's game between the two World Cup finalists, and neighbours, takes place in Cabinda, where the locals are simply hoping for an exciting game so that the region is talked about for footballing reasons.

And given the fact that the shaken players from all three camps in Cabinda are now effectively prisoners in their hotel - they cannot go out unless accompanied by massive security - they should be itching for the chance to show their skills.

It's too early in the tournament to ask why Africa's World Cup finalists are underperforming. Let's wait until the end of the groups, but I fully expect Cameroon, Ivory Coast and Ghana to come good - while believing that Algeria and Nigeria will struggle.

Before I go, just spare a thought for millions of African football lovers on this continent who are currently unable to watch Nations Cup matches because their governments or TV stations simply cannot afford the exorbitant fees being demanded for matches.