In the absence of traditional African superpowers Egypt, Nigeria and Cameroon, the 2012 Africa Cup of Nations presented an opportunity for the next generation of African stars to grab the limelight. So which Africans are in line to fill the boots of Didier Drogba, Samuel Eto'o and Michael Essien as the next big names of European football?

Below, I have chosen eight of the most exciting footballers aged 23 or under to have played in Equatorial Guinea and Gabon - with the notable exception for Rainford Kalaba, 25, whose Nations Cup displays may prompt a European team to take a chance on him again.

Emmanuel Mayuka, 21, Young Boys (Switzerland): Even before the Nations Cup began, this young and pacy striker was attracting the attention of top European sides - Newcastle United and Fulham figuring prominently among them. So his three goals at the finals - a tally shared by six other players - will only have increased the 21-year-old's prospects of leaving Young Boys. The best of the bunch came against Ghana in the semi-final when he scored a goal out of nothing, curling home from the edge of the box, to settle a tight game. With a keen eye for goal and a willingness to take people on, Mayuka's talents were first spotted by Israeli side Maccabi Tel Aviv, who brought him over to European football when just 17. A move to Switzerland followed in 2010.

Sometimes sport throws up stories of human spirit that you cannot help but watch with a warm smile - as Zambia's first-ever Africa Cup of Nations success did on Sunday.

The triumph, taking place in the same country as the side's devastating tragedy in 1993, may have disappointed Ivory Coast fans, but any neutral can only marvel at the southern Africans' fairytale win - a mental and sporting triumph which beat the odds in similar fashion to the European titles of Denmark (1992) and Greece (2004), or that of Iraq's 2007 Asian champions.

Rank outsiders to win this competition, the Zambian squad repeatedly cited the devastating air disaster that killed 18 of their national team off the coast of Gabon 19 years ago as an inspiration to do well - a mission statement that even their own fans struggled to believe at first.

Lest we forget, the Chipolopolo don't even have a proper home after Lusaka's main stadium was declared unsafe a few years back while they also travelled to the Nations Cup with an injury to key man Jacob Mulenga, one half of the country's entire Europe-based contingent. 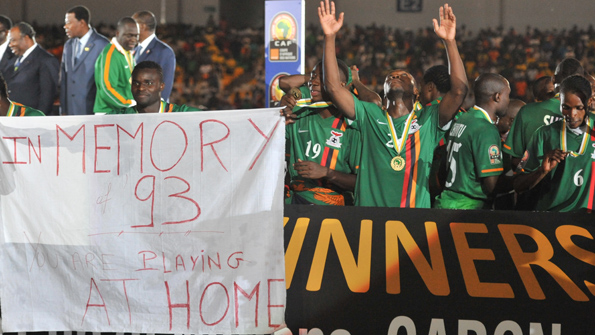 Zambian players hold up a banner commemorating the Chipolopolo players, coaches and officials who died in the 1993 air disaster off the coast of Gabon

For the second time in as many editions, the Africa Cup of Nations has been overshadowed by shocking football-related deaths on the continent.

As in Angola two years ago, where Togo's team bus was ambushed by separatist rebels, the Egyptian tragedy has an overtly political feel underpinning it - with many far closer involved than I discussing the divisions (e.g. rebellion-backing Al Ahly fans taking on a resentful police force) that prompted the appalling scenes.

The tragedy also resulted in the retirement of an African footballing legend - Mohamed Aboutrika - the Al Ahly midfielder who won two Nations Cup titles (scoring the winner in the 2008 final) for Egypt and would have had three had he not missed the last tournament through injury.

But the question of who will replace the Pharaohs as kings of Africa is still open to healthy debate after a first round that contained some incredible shocks, wonderful matches and outstanding goals.

This month's Africa Cup of Nations is the most open tournament in years and as much about those that haven't made the finals in Equatorial Guinea and Gabon as about those who have. The absence of defending champions Egypt, Cameroon...

Keeping it in the family

Andre "Dede" Ayew's grandfather did not play football but the odds are he might have been pretty handy had he done so. For three of his sons all played internationally for Ghana, including Abedi "Pele" Ayew, a man widely recognised...

Somalia's search for a lucky break

As you flick on your television to watch England take on Spain on Saturday, you may like to thank your lucky stars for being able to follow the game so easily. It's second nature - a ritual almost without thought...

Qualifying blunder leaves South Africa down and out

Fifteen months on from the elation of receiving wide praise for staging a triumphant Fifa World Cup, South African officials are now plumbing the depths. In case you don't know, Bafana Bafana failed to qualify for the 2012 Africa Cup...