Right Here, Right Now: At the Format Festival in Derby 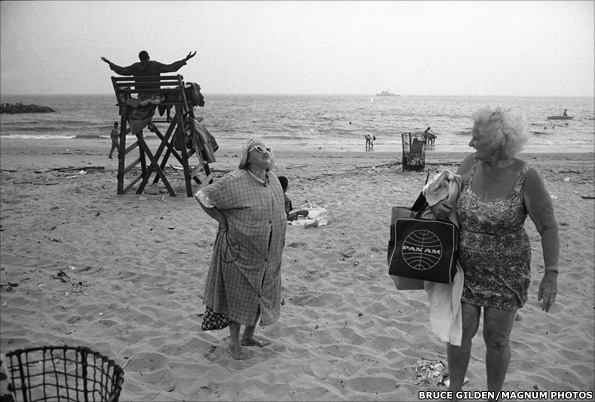 A quick zip up the M1 on Friday took me to Derby and the opening day of the Format International Photography Festival.

This year's festival, curated by Louise Clements, explores the work of more than 300 artists working in the public realm, including both traditional street photographers as well as those producing pictures in a more conceptual manner.

The festival is centred on the Quad gallery in Derby but extends to many locations around the city as well as further afield. It features a host of well known names such as Joel Meyerowitz, Bruce Gilden, Chris Steele-Perkins and Alex Webb but also champions the work of many newcomers in addition to inviting people to submit their own work to an ever evolving gallery via Flickr. 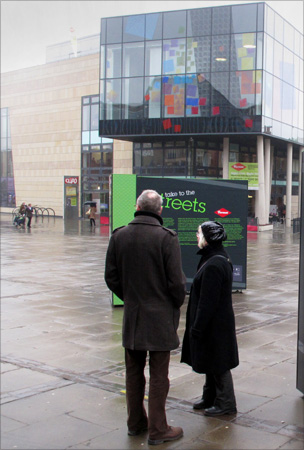 There's also a chance to meet and learn from the photographers through workshops or you can seek inspiration in the galleries or attend a workshop.

I attended the opening conference, here's a rundown of the day.

Sophie Howarth and Sara T'Rula kicked the day off with a detailed account of how social media is being used by photographers who are working in the public arena.

Sophie is the co-author, with Stephen McLaren, of the book Street Photography Now on the back of which they launched a weekly competition whereby leading photographers would challenge photographers to go and shoot a picture on a theme, upload the results to Flickr and then have them judged by the photographer and the online community.

Not all went smoothly though and this is where Sara came in. She was one of those who took up the challenges but found the initial process both confusing and potential unrewarding. Sophie and Sara outlined the way that working online encourages instant feedback, some considered and some not. Sara's grumbling led to the two of them getting in touch and soon she was able to use her own experience to help guide the process.

Together they helped make this smoother and within the groups new ones began to form, smaller communities and ideas, shaped by a number of individuals who emerged to help guide in an unofficial capacity, self moderation of you like.

I found this fascinating, as it's something we are well aware of here at the BBC and something that we wrestle with constantly.

Next up was Nick Turpin who seems to be a regular in this blog. Alongside showing his work and that of his fellows at In-public he was commissioned by the festival to shoot a documentary on street photographers. The resulting film In-Sight is on show in Derby for the duration of the festival and provides, well, insight, into the work of many leading practitioners. 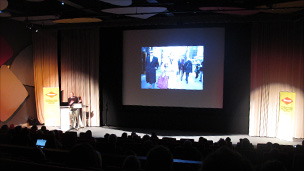 A brief clip threw the audience into the chaos of the street showing how the photographer had to make the decision as to whom or what to feature in the final picture. The film includes interviews with a number of leading practitioners and a preview can be seen on Nick's blog sevensevennine.

In contrast curator Yumi Goto presented the audience with the work of a number of documentary photographers, some of whom were presenting very challenging work. The pick of the bunch for me was Kosuke Okahara's series entitled Ibasyo which explores the issue of self harm amongst Japanese women. You can see the work here (Warning: Contains pictures that might cause distress to some).

The subject is often taboo and obtaining the trust of those featured can not have been easy, but the import element here is the way the women's story comes across and the pictures draw us into their world - really good documentary work. I'd suggest you explore more of his projects.

From there we slipped into the world of Bruce Gilden who treated us to a fast paced trawl through his work, all of it up close and very personal. As a child in Brooklyn he was hooked by the vigorous street activity outside his window and he has thrown himself out there ever since.

He described his pictures as, "symbols for what I see," and as fantasies, that allow people to make up stories. The picture at the top of the page was the first he took that he felt had artistic merit and he labelled it Fellini.

Bruce's presentation was fast and fun, full of anecdotes, including one about a man who he photographed holding an inflatable plane (below). Some time later it was about to be published and he needed to get a model release so he duly headed back to Coney Island where the picture was taken and managed to track the man down. As payment, he offered a print or $15, Gilden said: "The man took the money, so I guess he didn't think much of me as a photographer." 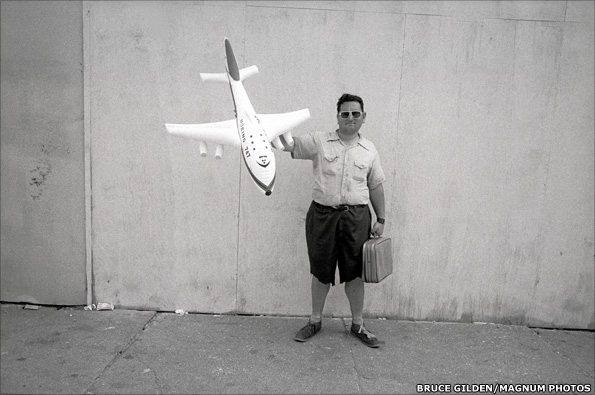 He also showed us plenty of recent work from Russia and the US where he is exploring the recent financial downturn. He was also commissioned by the festival to shoot picture of Derby.

Amy Stein then took the stage and presented a few pictured from her series Domesticated before moving onto Stranded, a series of pictures of motorists broken down by the road side. A twist on the American road trip and a metaphor for the isolated and lost American dream.

The work proved to be engaging and worked on so many levels, from the mystery of the back story, the feeling of isolation all from such a simple idea. There is also that underlying notion that we are not supposed to stop and help strangers, adding to the vulnerability in these pictures, for the photographer and those pictured.

Mark Sealy then ran through the work of a number of African photographers and their lack of voice in the history of photography. He explored the way in which African culture has been captured, manipulated and commodified by the West, for both political and economic gain, leaving us with the thought that the portrayal of Africa as a "continent with an outstretched hand still has to be arrested".

Nate Larson and Marni Shindleman were on next. Their work explores the idea of, as Marni put it: "The narcissistic noise of millions of bloggers all talking about themselves."

Nate and Marni create visual representations of activity on social media, the most engaging, and at times funny, idea being to use the GPS location tags from Twitter messages to fix the location of a shoot.

So, by finding a message on Twitter they will go to the location it was sent from and take a picture, this is then mapped and merged with the Tweet. They do in fact travel via Twitter, and whilst in Derby have been doing just that. Again, you can see more on their website.

Photographer Michael Wolf worked for Stern magazine for many years as their photographer in Asia, often spending months on one story, when as he put it, the budgets were pretty good.

Michael presented a number of projects including Transparent City, a series shot in Hong Kong where he photographed the skyscrapers without any reference to scale, removing the skyline and street level, producing what look like graphic shapes, dense architecture that becomes something otherworldly.

But on moving to Paris he felt uncomfortable, and the strict privacy laws worried him so he set about exploring the city via Google Streetview, shooting "street" pictures from the screen, searching for as he put it: "interesting narratives that leave something open to the imagination".

He has managed to find many compelling moments and feels that the value of Streetview will: "show itself down the road, a rare all encompassing view of a city, many cities... showing how people dressed and how people looked".

The last speaker was John Maloof whose story has been well told on the web. Suffice to say it is a fascinating one and one that is by no means at an end. To keep it short, John purchased boxes of work by Vivian Maier, a total unknown, in the hope that she would have some pictures that might fit a book he was then working on about Chicago. She didn't.

However, what was in there turned out to be arguably some of the greatest street photography you will see. The story is a detailed one and you can read it on his website or in this interview with the BBC earlier this year so I won't re-tell it here.

But please do spend the time taking a look and check back from time to time as the work is still being unearthed. There are many more rolls to be developed and some colour ones that may or may not be salvageable.

One of the most compelling parts of the presentation was seeing the way Maier's work developed from black and white to colour and how it reflected the work of other photographers, especially Lisette Model.

This is more than just unearthing a series of stunning pictures, this requires great detection and the piecing together of a mystery, all credit to John for his tenacity and desire to do the right thing.

Ending full circle, Sophie Howarth offered John her praise for doing just that, pointing out that we can be thankful it was he who found the work, many others might have thrown it in the skip without a second glance.

A great way to end the conference.

The Format International Photography Festival runs until 3 April and a comprehensive listing of events can be seen on their website. You can also follow them on Twitter @formatfestival.