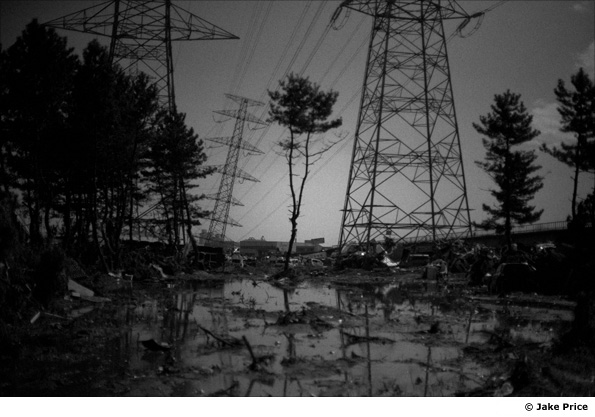 The earthquake that hit Japan on 11 March and the powerful tsunami it triggered is now known to have killed more than 10,000 people, with more than 17,000 still missing. Add to that nearly 200,000 people who are living in temporary shelters, then this is a tragedy on a massive scale. Lives will remain uprooted for many years, and the loss of loved ones and communities is something that may never be re-built. On top of this there is the continuing threat of a major radiation leak at the Fukushima nuclear plant.

For photographers the immediate aftermath provided shocking images of widespread destruction on a scale that is hard to imagine, with satellite photographs perhaps being the only real way to try and grasp the enormity of it.

Now, however, there is a need to tell the stories of those who escaped, who survived and are struggling to figure out what to do next.

Photographer Jake Price has sent this report from Tokyo having returned from a trip to affected areas in the north of the country, primarily around Sendai.

"As I boarded the plane in Tokyo bound for Yamagata in northern Japan the note on the lounge screen remarked that the plane might be returned to Tokyo because of snow. Despite the warning I boarded and headed north. About an hour later the plane started its descent. Visibility was next to nothing, but the plane pushed on, emblematic I thought of how the Japanese handled this most horrid of catastrophes I was descending into. 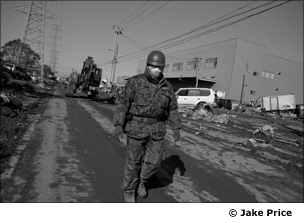 "Once on the ground I could not rent a car due to rationing of gasoline. With no other option I traveled by bus, changing three times, to reach the tsunami zone, west of Yamagata.

"In Yamagata, after wandering the snowy streets for a couple of hours I came upon the Hotel New Marble that had a room. The following morning I met a women named Kobayashi from Miyagi who had lost everything and was put up in the hotel by her company. She told me the thing she remembered most from the day was: 'The water that engulfed us was totally black, as if it was another substance all together. To escape it I climbed to the fourth story of an adjacent building, but the blackness kept coming. Finally it abated, but in my memory sometimes it continues to climb.' She shook while she spoke. I was the first one, outside of her husband whom she spoke with. 'Just to tell someone is a great relief.' She and her husband were staying in the hotel for one more night.

"Six hours, two buses and two more taxis later I arrived in Tagajo, a small industrial town adjacent to Sendai. I arrived late in the afternoon. As dusk fell it was evident that there was no place to sleep when I came to a centre for the displaced. I asked if I could rest there and was given a small space to stay amongst the hundreds of others that now call the gymnasium home. In total 1,300 people lived on the school grounds. I slept there for two nights. 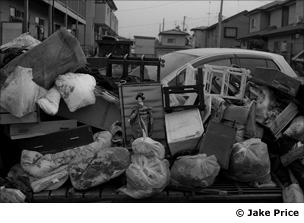 "I cannot say that I lived as they did because I do not have the weight of loss hanging over me, or the precariousness of the future to occupy my thoughts. But, by living there, at least I could understand the conditions that people lived in. You can tell a lot about the state of people at four in the morning when the night is at its darkest and time moves the slowest.

"At the back of the gymnasium a young boy violently howled with a raspy cry. Inconsolable at first, he was gradually placated and fell back to sleep. Nearest me were mainly the elderly.

"As I walked the streets the next morning I was struck by the small things that people did to order their lives. A relentless sense of order prevailed over the destruction. In front of homes, magazines and books were neatly wrapped for disposal, along with furniture, clothing and other household items all neatly grouped together.

"On the larger scale some factory workers had already returned to their workplaces and started working on small things such as sweeping the grounds to keep them tidy in preparation for the day when the heavy equipment would start to do the substantial work. In all, these small efforts contribute to the whole which will get life moving again. Much has been said about Japanese stoicism, but I don't see people as merely stoic. There's also a lot of hope here. If there is hope it is because of a pragmatic approach to life which leads to a future worth living."

Here a few pictures of Jake's from Sendai 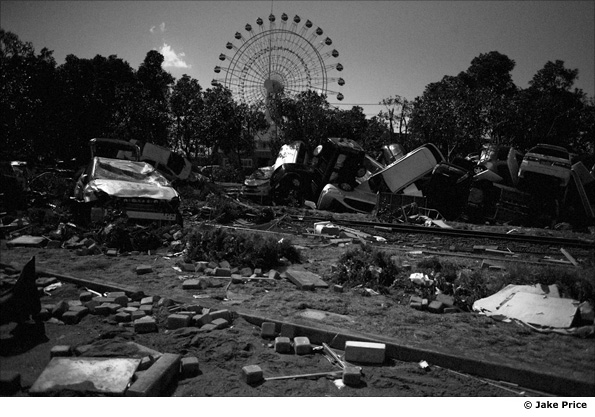 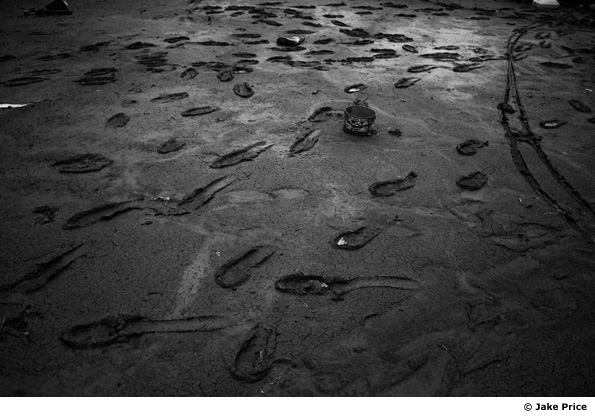 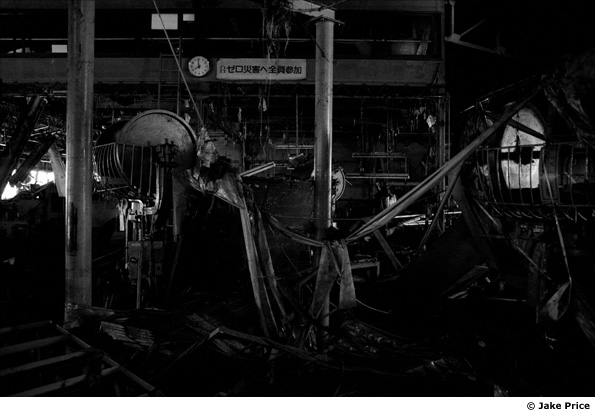 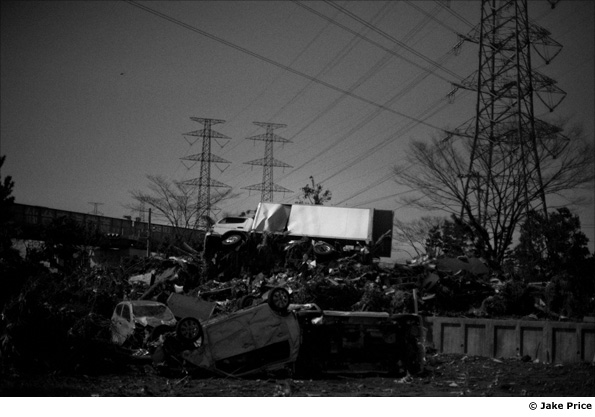 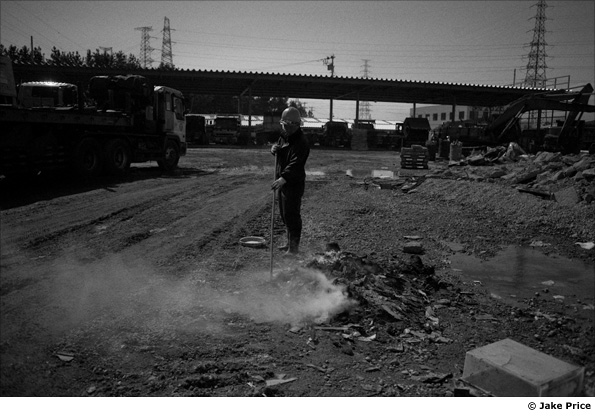 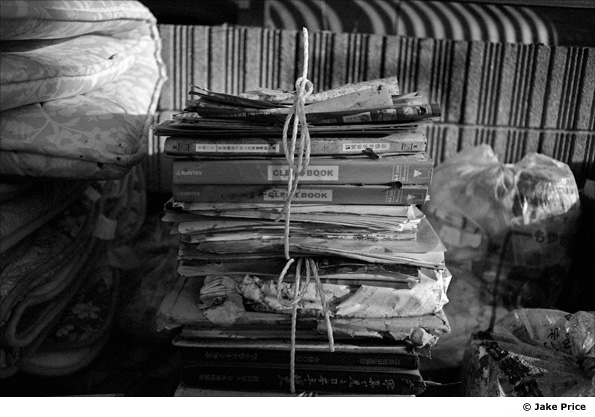 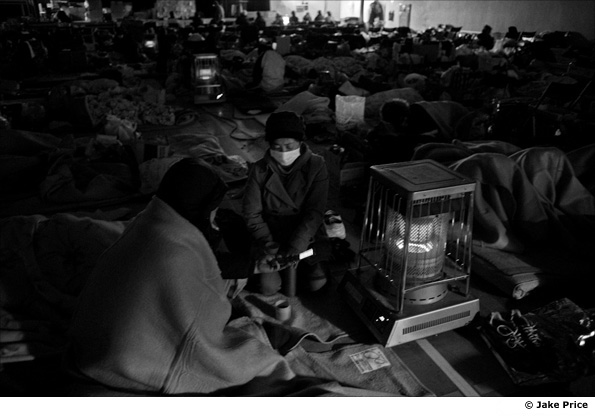 Update 11 April 2011: Jake Price has narrated an audio slideshow which you can now view on the BBC.