Photographer Steve McCurry is perhaps best known for his picture of the green eyed Afghan girl who stared out from the front page of National Geographic in the 1980s, yet his portfolio is crammed with powerful colour shots from around the globe.

Part travel photographer, part photo-journalist, a retrospective of his work is currently on show at the Birmingham Museum & Art Gallery, where he spoke about his methods and in more detail about a number of his pictures.

"When walking in the street I'm opened up to a certain kind of person, a person who will speak to me in a very profound way, and once I find that person, I get very excited. I suddenly get very enthusiastic, and I think my enthusiasm is infectious and suddenly we have this chemistry, this sort of bond where I'm so enamoured with them and how they look and how the present themselves.

"It's actually a really quite an odd thing to walk up to a stranger and yet within a matter of seconds to be able to try and persuade them to actually stop what they were doing and to allow me to take their picture. I've sort of developed a way that is in part showing respect, plus there's an element of humour to try and defuse the sort of embarrassing, awkward situation." 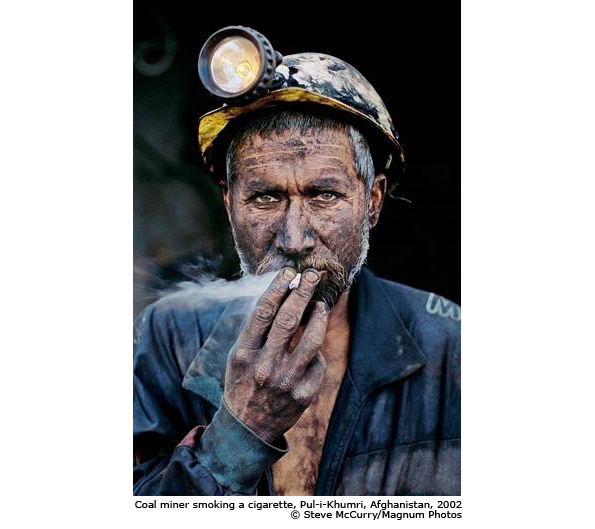 "You know the thing that was so astonishing about these coal miners in Afghanistan, they go underground for 12 hours a day, they go in six o'clock in the morning and when the sun's setting they come back out. They've been breathing coal dust all day long, there's no protective gear except this sort of flimsy helmet. But the first thing this man did when he came out to the ground, after breathing all this coal dust, is light up a cigarette. And I just found it so amazing." 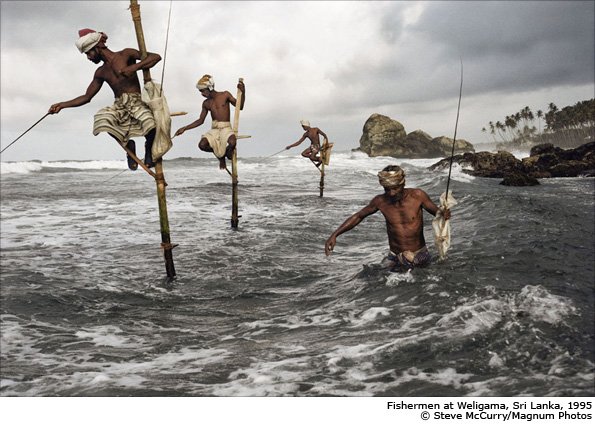 "I had photographed these fishermen with this very unique way of fishing from the shore and after a while I realised that to get the best angle was to join them, so I had to wade into the water up to my waist. It's such a strange and wonderful way they fish perched on this pole, which is jammed on this coral reef, and they sit there for a couple of hours in the morning, and then couple of hour in the late afternoon, and I was amazed with how much fish they can actually catch.

"One of the ways I work is I shoot, I think about it, I wonder how can I do this better, and then I go back again the next day and sometimes I go back five, 10, 15 times, waiting and looking and exploring the best moment and the best situation and angle. Getting the right composition boils down to hard work." 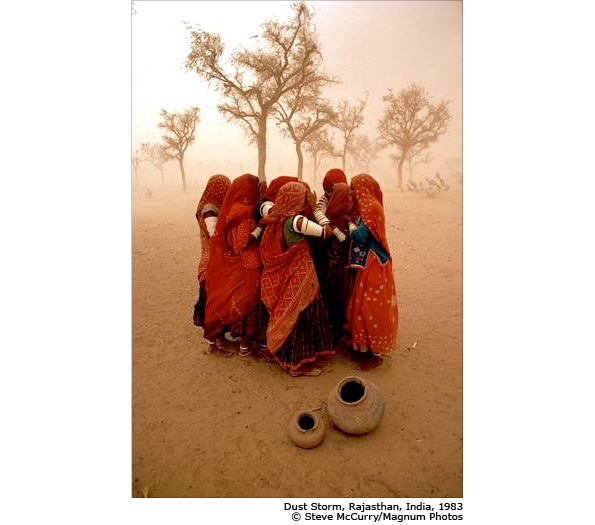 "I think most photographs require a lot of work to get right. This is one of these gifts that sort of falls on your lap. I was riding through the desert on a taxi in Rajasthan, when suddenly out of nowhere this dust storm kind of whipped up, and within seconds the sky had gone dark, and this really strong wind was blowing.

"I looked off into this field and saw these women dressed in very colourful clothes, huddled together protecting themselves from the wind, and they were singing. I literally opened the door, dashed out, ran across this field and I shot I guess 15 or 20 exposures and made to or three what I felt really good pictures. And then, just as quickly as this dust storm started it stopped, and the whole thing was over and they just went back to work. The whole thing lasted no more than two minutes." 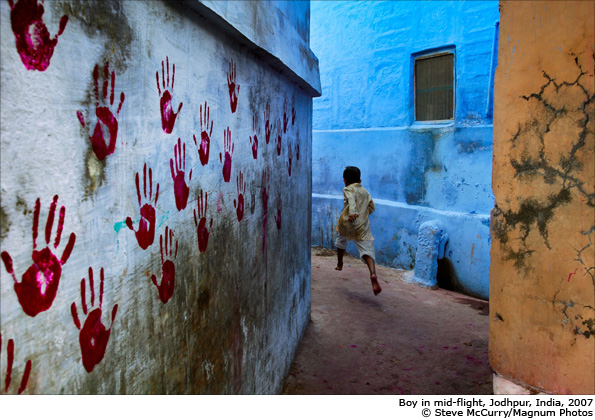 "I've been going back to this visual ancient quarter of Jodhpur for probably 20 years, and I know that area very well, I must have photographed every street. But there was one corner that I realised had potential for an interesting composition with these hand prints on the wall.

"It was a major thoroughfare with people coming and going. I was photographing people coming towards me and away from me and there were a number of really interesting pictures. In fact I went back there the next day. And as I was editing, I realised that one of these pictures which I hadn't really remembered taking was one of this boy running and I caught him in kind of mid-leap, it just had this kind of wonderful decisive moment to it. I was very pleased with that picture."

Steve also spoke about his most famous picture of the Afghan girl, Sharbat Gula, he said:

"I was doing a story on the Afghan-Pakistan border, this was a time when there were three million Afghans living in Pakistan. And one morning I was wandering through this refugee camp in Peshawar and heard these voices coming from this tent. I went over and looked in and I realised it was a girls school. These were girls around 12 years of age. I started to talk to the teacher to see what was going on, and as I was surveying the situation I noticed this one little girl sitting off in the corner with these amazing eyes, I've never seen anything like that.

"Eventually I asked the teacher if I could photograph her and for the next couple of minutes I made five or 10 frames of her. And for a brief moment the light was right, the composition was right, the background was right, everything was right and I made the picture.

"Once it was published on the cover of National Geographic we literally got thousands of letters. People willing to send her money, people wanted to adopt her, there were even men who wanted to find her and marry her. It just never let up over the 17 years.

"Many years later I went back to see I could find her. I was a little bit apprehensive because I thought is this going to be good for her? But then I thought this would be an opportunity if we could help her, give back to her, and actually compensate her for all the usage of that picture and make her life better. And I thought this would be the overriding, the most important thing we could do.

"We found her, and she was married to a baker and had three children. She was living in a small village in Afghanistan. She seems to have a pretty good life; although extremely poor, her husband was making only one dollar a day.

"Her big dream in life was to have her children educated and to perform Hajj. So National Geographic actually made that happen for her. Not only her but she brought 11 of her relatives and friends on this trip which was really and truly once in a lifetime experience for them. And then they organised a particular kind of compensation for her.

"I did of course photograph her again. Photographing her without her burqa was totally up to her and her husband. We had a lot of help from her community but somehow this thing came together and with this cooperation she was willing to be photographed."

You can read more about the story of how they found Sharbat on the National Geographic website.

More of Steve McCurry's work can be seen on his website.

Thanks to Fergus Nicoll of World Today on the BBC World Service who recorded this interview.