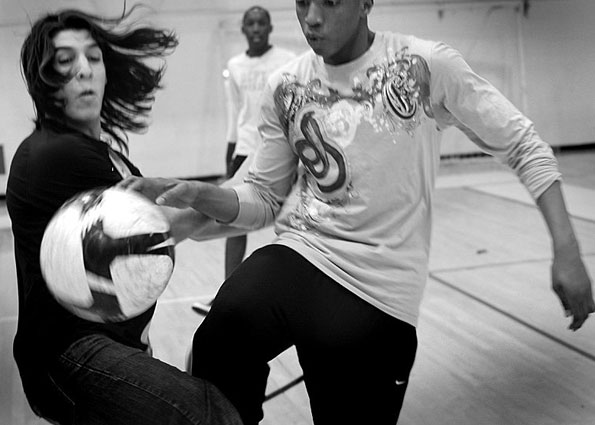 Today we have published an audio slideshow that looks at the football team at Martin Luther King Jr High School in New York that has won 12 out of 14 city championships and whose players have one of highest graduation rates and are regularly awarded scholarships to prestigious colleges.

This was an interesting story to shoot so I thought I'd outline a little of the process here. My colleague Vanessa Buschschluter and I arrived at the school and met with Coach Jake who was to provide the voice over for the slideshow and for a radio package.

Once through the tight security on the door Jake took us to his office which was soon filled with students, some from the team waiting for the practice session to begin and others who were just hanging on. There was even a reporter, or should I say sports editor, from the school's paper badgering Jake for an interview. She'll go far.

Anyway, why mention this here? Well, some stories get you into places that you'd never go unless you have the privilege of a job like this. Standing in the middle of the sports hall of a US inner-city school, total mayhem, or at least that's how it appeared to me. My task was to try and make it work as a slideshow.

Vanessa took care of the sound, so that was one less thing to worry about, but the need to have enough pictures for whatever sequence she came up with meant 30 minutes of continuous shooting.

It wasn't like photographing a normal football match where you can to some extent read the movement of the players. Time was short as there was a basketball match about to start so I needed to get as much as I could quickly so I shot with two cameras, one with a 50mm lens and the other a 28mm.

I was standing on the pitch as they played following the ball and trying to balance blur and some focus to portray at least something of the energy in the room.

Of course given the nature of the audio slideshow I also needed some simple sequences that might work depending on the audio. This is one of those totally unstructured stories at the shooting stage.

I had thought about doing it in black and white from the start as I felt it might give it an extra something, a bit more of a visual punch. It was after all a training session and not a game, but once there I also had the issue of colour balance. I've never been in a hall that was so heavily lit with tungsten bulbs bouncing of the wooden floor, and the black and white option just solved that problem of balancing shots from the hall with those taken elsewhere.

Once the session finished we interviewed Jake for the voice over and a radio package before heading off. I then left Vanessa to it as she edited the audio to suit and once she was happy she sent me the file and I overlaid my pictures, matching narration and the sounds of the game to the photos in Soundslides. The resulting output was then uploaded to our server by our web developers.

So there you go. Would I have done anything differently? Given a bit more time then I'd have probably tried some longer lens work but as with many features you just have to go with the flow.

You can view the slideshow here.