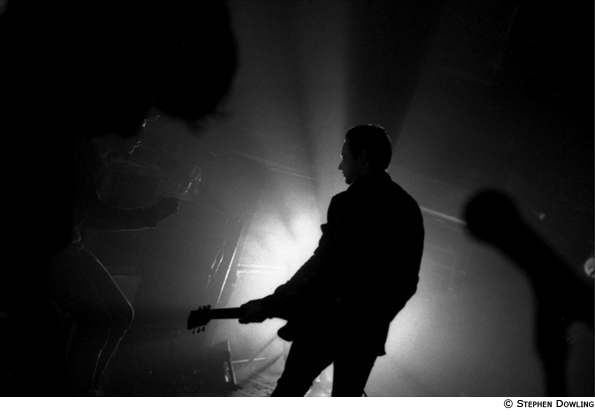 Shooting bands can be tough. Three songs and you're out, or so it usually goes. That's what most photographers get at a gig, three songs in the pit in front of the stage then it's time to leave.

Finding a new angle can be tough, but Stephen Dowling has been doing just that and for a number of years he has been shooting pictures of bands during their soundcheck prior to a show. He shoots on black and white film using available light and that also gives his pictures a different feel. 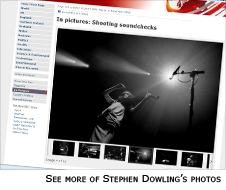 Stephen is a music journalist, indeed he used to be a colleague at the BBC, but his self set project has been slowly gathering pace and I thought it was time to take a look. You can see a gallery of his work here.

I'm a big fan of available light photography and some of his shots capture the mood, the quiet moments and professionalism of the musicians ensuring the sound is just right.

I put a few questions to him and you can read his answers below.

How long have you been shooting?

"I learned the basics as a journalist on a weekly paper in New Zealand back in the early 1990s, but I never went beyond the basics - camera set to automatic and hoping for the best. My mum was an art history teacher though, and I think there was always a latent interest.

"Later on in my 20s I started looking at photography more. I started shooting more and more, reading photo books and magazines. Eventually I put my autofocus Canon in a drawer and bought myself an old East German Praktica with a standard lens, to teach myself from the very basics up."

Why are you using film, what's wrong with digital?

"Film has a totally different feel which I think suits a projects like this. Black and white film has a depth that its digital counterpart cannot yet match - the blacks are so much darker and the contrast in the highlights more attractive.

"With such low light I am shooting at ISO 6400 - the developed shots have a grain which adds to the mood, whereas the noise produced by digital images wouldn't be as appealing. Also, with no ability to view my pictures while I am in the venues, I am just shooting, and I think less likely to miss opportunities. I'm not constantly looking at what I have just taken, editing."

You must have spent some time in the pit with the other photographers, any stories to share?

"I'm not usually hanging around in the pit come show time, but when I was shooting the Manic Street Preachers I decided to shoot a roll during the show. I fully expected to be the only person using a film camera, but when I turned round I saw Pennie Smith - the photographer who shot the image of Paul Simonon of The Clash destroying his bass - snapping away. She was using the same battered old Pentax she'd used to shoot the Clash. Amid all these huge zooms and expensive digital bodies, it was inspiring to see her shooting like she always had."

What's your goal, when will the project be completed?

"I've set myself a preliminary limit of 25 bands - some bands I have shot a few times - before I approach a gallery. I'd like to distil it to one image of each band or artists, and try to let the pictures flow together.

"These photos are of performers, but they are not performing. The body language is totally different, they are not acknowledging the crowd because the venues are empty. I think it's a kind of music photography that isn't often seen and I hope an exhibition of my best shots shows something most music fans don't get to see very often. And I hope to be doing it for a very long time."

How do you approach the bands?

"I'm a music journalist so have good contacts with press agents, managers and bands themselves. Some of the bands - like Lambchop, Calexico, or Neil Finn - are people I know and who've been really encouraging throughout.

"Others, such as British Sea Power or the Maccabees or Bon Iver I don't know, but their management or press people were kind enough to allow me to shoot. I've made a lot of friends along the way, and travelled to some interesting places with great people. And the soundtrack hasn't been bad either."