On a different wavelength: 100 years of infrared photography 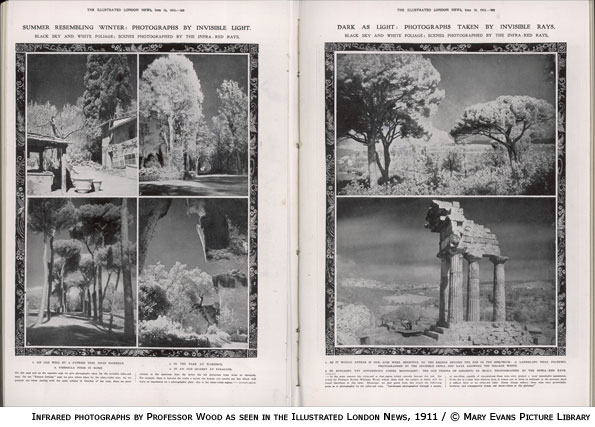 This year sees the 100th anniversary of the first published infrared photograph. Though there had been infrared spectrograms produced before 1910, as far as we know the first infrared images in print were taken by Professor Robert Williams Wood and published in the October 1910 Photographic Journal of the Royal Photographic Society (RPS).

Wood's pictures later appeared in the Illustrated London News in June 1911, as shown at the top of this page.

Infrared radiation was discovered in 1800 and today has a multitude of applications including the laser in your CD player and those remote controls for your TV that always vanish down the back of the sofa. Infrared imaging is widely used, though primarily in other fields away from artistic photography such as forensics, medical and scientific imaging and astronomy.

Infrared photography shows us a world we can recognise, and yet it has an alien quality to it, something like Mars in early science fiction films. Flash Gordon would be well at home. 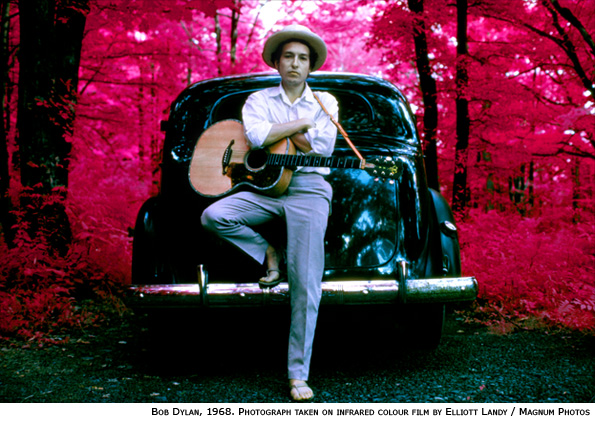 Infrared is part of the spectrum beyond that which the eye can see, yet photographic devices are capable of recording it. But this is not a how-to guide; if you are interested in one, Infrared Photography Buzz is a good place to start.

One reason, I have to confess, is my near-ignorance of all things infrared. It's not something I can claim to have shot - at least not successfully! 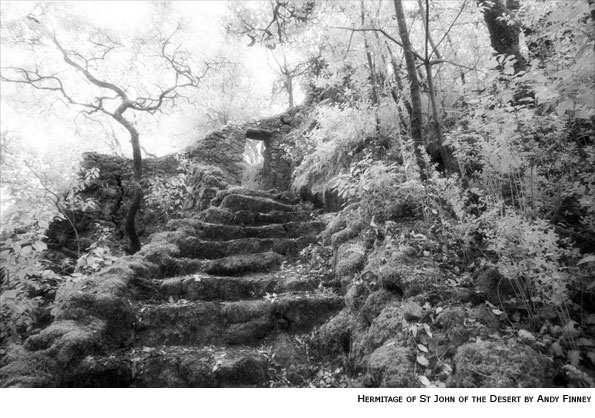 So I asked Andy Finney, an expert in this field, to explain a little of the history and what draws him to this alien world. He said:

"Why does infrared photography fascinate me? Partly it is because I like the way it emphasises inanimate objects in the landscape, crosses in graveyards overgrown with foliage for example. I love the way trees can look like rivers of fire dancing around obsidian branches and boughs.

"Another reason is that no-one can say that it shouldn't look like that - any flavour is equally valid.

"Near-infrared behaves like visible light, whereas the longer-wavelength thermal infrared plays tricks, and will go through a bin liner but not glass, and can make a ball of hot air seem to be a solid object.

"Near-infrared can be imaged using appropriately sensitised film and conventional digital imaging chips, whereas thermal imaging requires more specialised equipment, so it's the near infrared spectrum we are interested in as photographers.

"The colour which a visible object appears is a result of the amount of red, green and blue light that it reflects. The same is true with near-infrared, and with a few exceptions, the big one being foliage, most things have the same tone in infrared as they do in a normal mono photo.

"The scattered light we see in the sky is made up of shorter wavelengths, which makes it look blue. The light is scattered by tiny particles in the air, which only affects shorter wavelengths. You can make the sky darker in a black and white photo by using a red filter. With infrared, the sky goes darker still. The clouds, however, are reflecting all the light and are as bright in infrared as they are in visible light. Since shadows are lit by open sky, and the open sky is dark in infrared, shadows are darker too.

"Open water, such as a river or lake, reflects the sky, and so the water will also look dark. This is nothing to do with water absorbing infrared.

"As film-based photographers knew back at the end of the 19th Century, it was actually difficult to get film to record red light and so it took some serious effort to sensitise photographic plates to infrared. When Professor Wood gave his RPS lecture in 1910, he had sensitised his own plates, since infrared film did not become commercially available until the 1930s.

"Once available, though, it seems to have been popular in the mid-to-late-30s; even Ansel Adams is reported to have shot a few infrared photographs - but he was, sadly, not enthusiastic. Logie Baird even designed and built an infrared TV system called the Noctovisor. Hollywood used infrared film for special effects, such as shooting night scenes during daylight.

"But it wasn't until the arrival of digital photography that infrared enthusiasm really took off since it is relatively easy to take infrared shots with a digital camera - that is if you can overcome the infrared filtering built into your camera.

"When I started my infrared photography website in the mid-1990s, there were very few of us about and the film was difficult to buy and fiddly to use. In recent years, it has spread and the web is brimming with fantastic infrared views of the world.

"Since the 1930s a number of notable photographers have dabbled and even specialised in infrared photography. Minor White, for example, saw infrared as an extension of his exploration of tone in photographs.

"The legendary Weegee took iconic photos of cinema audiences using infrared and Elliott Landy took some great colour infrared photos of Ornette Coleman, Bob Dylan (see above) and The Band in the late '60s. More recently, Simon Marsden has produced a series of books on ruined and haunted buildings and Anton Corbijn used infrared film to shoot the cover of U2's album The Unforgettable Fire. Infrared cameras have also shown us the goings-on in the Big Brother bedrooms and in the darkness of night on the African plains."

So there you have it, an alien world ready to be captured on your doorstep.

The RPS is planning an exhibition of infrared photography in Bath and a two-day symposium in London in October 2010.

The website Infrared100, which Andy runs, is encouraging enthusiasts to get together and show their work.

I'd also love to see your infrared pictures. Please send them to viewfinder@bbc.co.uk and I'll publish a selection in the coming weeks.

You can see some of Andy's infrared pictures on his Invisible Light web site and on Flickr. 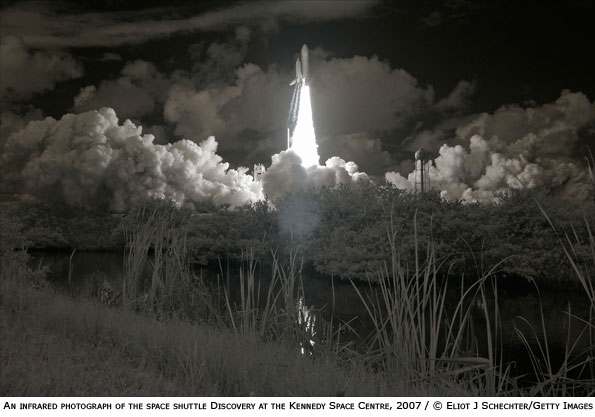