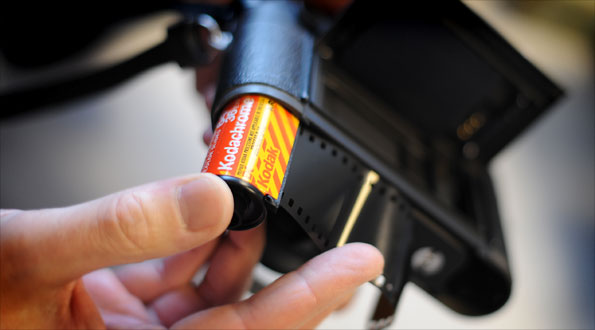 The original little yellow box is no more. Kodak has finally pulled the plug on Kodachrome, one of the first colour films to be available to the masses.

Kodachrome has had a special place in the hearts of many photographers for nearly three-quarters of a century, but was at its peak of popularity during the 1950s and 60s, though today it accounts for less than 1% of Kodak's sales of film.

The writing has been on the wall for sometime as Kodachrome was the odd one out in a bag of colour transparency film. Kodachrome is the only film developed using the K-14 process; the majority of colour slide film uses a more standard E-6 process, which is universally available.

With the rise of digital all but killing off the amateur slide market Kodak stopped manufacturing the 25 and 200 ASA versions of the film a few years ago, leaving the 64 ASA version in production until now. There is currently only one laboratory that can develop the film, Dwayne's Photo, in Parsons, Kansas, USA, who have said they'll continue to do so for a year or so.

Personally, I'll miss Kodachrome. Back in the days when we shot everything on 35mm transparency (there are more than a million slides stored in the BBC Archive) the majority was on film that used the E6 process as we had an in house laboratory, but occasionally a few rolls of Kodachrome would run through the Nikon F3s our photographers used.

I can remember Willie Smith, the BBC News photographer during the 1970s and 80s trying out the new Kodachrome 200 at Wimbledon. He captured a fantastic picture of Martina Navratilova diving to return a shot on centre court, the image taken on a manual focus 600mm lens was pin sharp and looked superb, I'll see if I can locate it and post later in the day. 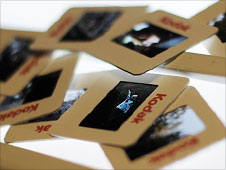 The long turn around was not so much of an issue back then as you could rush process Kodachrome by delivering it to a location in central London, though by today's standards the whole idea of waiting seems out of place.

I loved 200 ASA Kodachrome; it had a wonderful grain structure that nothing has matched since, but I do occasionally still shoot on Kodachrome 64, though only for pleasure.

My last roll was shot earlier this year on a family holiday, and there is still something magical about popping the yellow and red roll into your camera. You feel a need to do it justice.

Anyone who has waited a week or two for the holiday snaps to return in their little yellow box will know what I mean. Three rows of card mounted transparencies holding the fruits of your labour, just glorious.

That division between taking a picture and seeing it is something that digital has taken away. That pause allows us to forget the moment, and then be surprised, or maybe disappointed, all over again when we hold the little image up to the light; it allows us to look at the scene afresh.

I'll shoot at least one more roll, but that's maybe it. I've got a few rolls left, but I will probably let them remain in the fridge, a reminder of times gone by.

Along with every other blogger, I can't end the post without mentioning that Kodachrome will of course always be remembered for at least one reason, the fact that as far as I am aware it's the only brand of film that has been immortalised in song. So perhaps the last word should be left to Paul Simon: "Kodachrome, they give us those nice bright colours, they give us the greens of summers, makes you think all the world's a sunny day"... and what's wrong with that.

To see some great Kodachrome moments then Kodak is currently running a collection by a number of photographic greats and it's also worth checking out The Kodachrome project.

I'd love to see your pictures shot on Kodachrome or hear from any users, past or present. You can e-mail your photos to me or comment below.

Please see our terms and conditions, but remember that the copyright remains with you. The pictures will only be used by the BBC for the purposes of this article.