Can Cristiano Ronaldo be the first man to reach 40 goals in a La Liga season?

Lionel Messi got plenty of deserved plaudits a few weeks ago when he became the first player to score 50 goals in a Spanish campaign, so it's only appropriate that due recognition is paid to Ronaldo now that he has also reached that memorable milestone.

Ronaldo's two fantastic goals, both free-kick thunderbolts, in Real's 3-1 win at Villarreal on Sunday took his tally to 38 league goals for the season and 51 in all competitions, adding to the seven he has got in the Copa del Rey and six in the Champions League.

It is his La Liga statistics that stand out even, though his extra-time header in the Copa del Rey final, which gave Real a 1-0 win over Barcelona and Jose Mourinho his first trophy as the Madrid coach, may go down as his most significant strike of the season.

In league games, including nine goals in his last three matches, he has been banging them in as he strives not to be overshadowed by Messi as the season draws to a close. 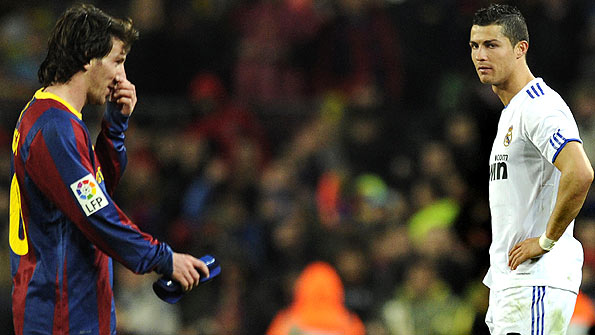 Ronaldo has an opportunity to step out of Messi's shadow. Photo - AP

In Ronaldo's 33 league games, 26 goals have gone in with his right foot, eight with his left and he's scored four headers. Four have come from free-kicks and eight from the penalty spot.

His two most recent goals on Sunday led him to equal the seasonal tallies of two of the most famous names in Spanish football: Athletic Bilbao's Telmo Zarra and Real's Hugo Sanchez, who scored 38 goals apiece in the 1950-51 and 1989-90 seasons.

Zarra reached his mark in 30 La Liga games and Sanchez did it in 36. By contrast, Ronaldo has done it in 33.

"The truth is, I never expected to score so many goals this season. It's an honour to be considered alongside these two greats of football," said Ronaldo rather modestly on Sunday.

It's an understandable statement considering that Gonzalo Higuain and Karim Benzema started the season as the focal points of the Real attack. But Mourinho quickly gave Ronaldo an almost free rein to do what he liked and go wherever he wanted.

Even if equalling Zarra and Sanchez's record did go a little bit under the radar in many other countries across Europe as they were preoccupied with their own title races and promotion and relegation battles, Ronaldo made plenty of headlines in Spain.

"Cristiano is now a legend," said Spanish sports daily Marca. "Cristiano is in Olympus alongside Zarra and Hugo Sanchez," added its rival As.

Even if their front pages lurched towards hyperbole, you cannot deny that Ronaldo deserves the credit.

Everything now is being set up for the Portuguese star to take sole possession of the record on Saturday when Real play host to bottom club Almeria, a team who have kept only one clean sheet at home all season and memorably went down 8-0 to Barcelona in November.

"Very few reach these figures (of Ronaldo's goals). It's something only three players in history have done. Reaching this figure says everything about Cristiano's talent," said Real team captain Iker Casillas on Tuesday.

"We can't win anything more as a team but we can help Cristiano achieve it [the record]. It's important that our team-mate gets as many goals as possible and is honoured as one of the best strikers in the world," he added, hinting that there can be some fun on Saturday at Almeria's expense.

It certainly doesn't look like it's going to be the typical tepid end-of-season kickabout between two teams with nothing left to play for.

Critics of Ronaldo will still argue that he doesn't do the business in the big games and that getting a hatful against Almeria will prove nothing.

Perhaps he will never shed that reputation until he does something spectacular in a Champions League final or Portugal jersey.

However, this season, in part thanks to Mourinho speaking the same language as him, literally and metaphorically, his head has rarely gone down when it has mattered. 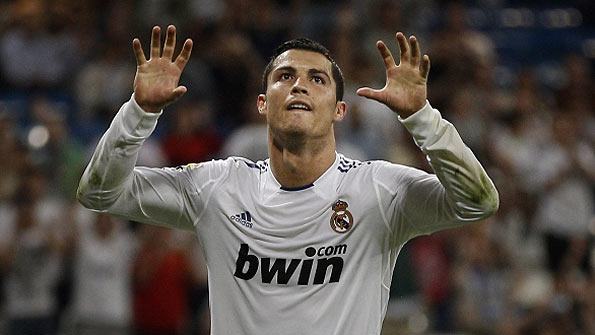 Madrid's star player is hoping to get his hands on a memorable milestone. Photo - AP

His Copa del Rey goal showed that and Real Madrid's failure to advance past Barcelona in the Champions League could hardly be laid at his feet.

His two goals against Villarreal and four at Sevilla just over a week ago were against teams whose places in Europe next season was still not settled.

In addition to further domestic glory, Ronaldo also has a chance to achieve a feat of huge continental significance.

The Golden Shoe is as-good-as his but not since 'Der Bomber' Gerd Muller, scored 40 goals for Bayern Munich in the 1971-72 season has a striker in one of Europe's big leagues won it with as many goals in a single campaign.

In fact, tallies in the mid-20s have been sufficient to win the award on several occasions in the last decade.

Yes, there have been players in the Austrian, Georgian, Portuguese and Romanian leagues who have reached 40 goals since Muller's mark. I'm also not forgetting the 43 that David Taylor bagged for Porthmadog in the League of Wales, which won him the European Golden Boot award in 1994.

However, with the greatest of respect to the likes of Eusebio, Mario Jardel, Hans Krankl and a few others who also got 40 goals or more in a season; I think everyone knows what we are talking about here.

Ronaldo may even have the last laugh over his rival Messi, who has currently got 52 goals in all competitions, but has not found the net in Barca's last five games, since he scored twice in the controversial Champions League, semi-final first leg at the Bernabeu.

Messi is likely to be on the bench in Barcelona's last league game at Malaga on Saturday as Pep Guardiola rests key players ahead of the Champions League final against Manchester United on 28 May.

If Ronaldo continues his recent scoring spree at Almeria, Messi may have to get past the likes of Edwin van der Sar, Rio Ferdinand, Nemanja Vidic and whoever Sir Alex Ferguson opts for at right back, if he is to retain his bragging rights.