Steve McClaren is still the boss at Wolfsburg and on Monday the former England manager was keen to show it to his players and an accompanying horde of spectators which included some of his most vociferous critics from the German media.

At the club's Marbella winter training retreat, McClaren led his players - including the apparently Manchester City-bound Edin Dzeko who might have been wishing his transfer had progressed a bit more quickly - on a 30-minute dawn run before breakfast.

This was a prelude to two further punishing training sessions later in the day, during which McClaren was reported to have reminded his players on several occasions: "This is not a holiday, we have lots to do, we are not here to have fun."

It has not been much fun for McClaren or anybody else involved with Wolfsburg this season.

The Wolves started the current campaign as a Bundesliga title contender in most people's eyes after spending about £35m - by coincidence, roughly the amount that City are expected to have to pay for Dzeko - on six players during the summer.

Wolfsburg also lured McClaren across the border from Dutch champions Twente Enschede, where he had resurrected his coaching reputation after his torrid time at the helm of England. 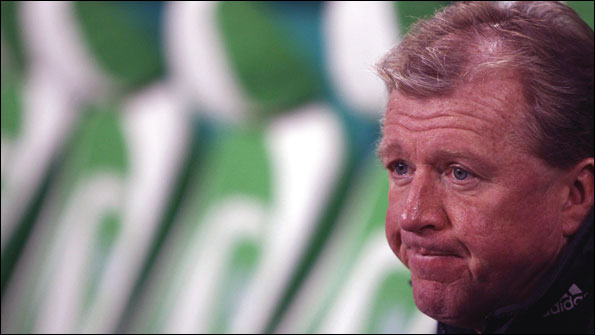 McClaren has had a torrid time since moving to Germany from Twente. Photo - Reuters

McClaren had a minimum target of getting the 2009 German champions back into Europe after they finished eighth last season and failed to qualify for the Europa League.

"McClaren is a far better coach than his England critics claim and, provided his German lessons go well, he should be able to achieve European qualification," predicted World Soccer magazine in its preview to the German season.

Spanish sports daily Marca went even further, forecasting: "Bayern should be champions again as coach Louis van Gaal has complacency as his enemy but Wolfsburg could battle them for the title."

However, it has not turned out that way.

After a disastrous November and December when Wolfsburg went eight games without a win - a streak which included six successive draws in the Bundesliga and an embarrassing German Cup defeat by Energie Cottbus of the Second Division - McClaren is under immense pressure to produce results.

Wolfsburg - a subsidiary of car manufacturer Volkswagen - have slid to 13th place in the Bundesliga, just three places and four points above from the relegation zone.

"The first half of the season was not good enough. I am disappointed, frustrated. We have problems in the dressing room, problems on the field. We have hit rock bottom," said McClaren after that Cottbus defeat.

Wolfsburg general manager Dieter Hoeness called McClaren into his office the day after the Cup loss for a three-hour crisis meeting and subsequently gave everyone, players and coaches included, a public dressing down on the club's website.

"We have got some cleaning up to do. We told the team eight weeks ago... that their basic attitude must change. We did not get a reaction so now we have got to react.

"The fans do not deserve to see what they are seeing on the pitch, particularly given the exemplary way in which they supported us against Cottbus.

"We expect the coaches to act consequentially and to punish bad behaviour both on and off the field," said the furious former German international striker, who played in the 1986 World Cup final.

The core of the problem has been a rebellion by some players, notably Algeria's World Cup midfielder Karim Ziani, to McClaren's coaching methods and tactical decisions.

Hoeness gave McClaren a stay of execution at their meeting, possibly because of the lack of viable alternatives, but Wolfsburg start the second half of the season with an unenviable schedule.

They play host to a resurgent Bayern Munich, who have won five of their last six games, on 15 January - the deadline for Dzeko to sign for City - before travelling to second-placed Mainz ahead of a meeting with runaway league leaders Borussia Dortmund.

One reason why McClaren's level of job security has shrivelled even further since Christmas - it is an open secret that, barring a miracle, he will be handed his cards at the end of the season - has everything to do with Wolfsburg's sudden willingness to sell Dzeko in the January transfer window.

Before Wolfsburg agreed a deal to sell Dzeko to City, Hoeness had consistently said that the Bosnian striker would stay until the end of the season, but the German club's general manager has clearly decided to start preparing for next season sooner rather than later.

So if McClaren follows Dzeko out of the Volkswagen Arena in the near future, who could be his next employer?

A Premier League club is the obvious answer, especially as McClaren has always said he would like to return to the English game.

Dzeko's likely transfer to City could also have a knock-on effect elsewhere in Europe.

Real Madrid were keeping tabs on Dzeko but, with his asking price inflated by City's interest, the Spanish club ceased to be serious contenders for his signature a while ago.

However, with Karim Benzema still failing to convince despite a few good games recently and Gonzalo Higuain requiring back surgery, coach Jose Mourinho looks set to go into the market for an out-and-out number nine in the coming weeks.

Emmanuel Adebayor's name is the one that is getting pencilled in by pundits and the public alike as Real's big winter transfer winter acquisition.

Mixed messages have been coming from the Real offices in the Santiago Bernabeu stadium regarding Adebayor, with club officials clearly looking closely at his price tag and a salary of about £170,000-a-week.

Stories have been appearing regularly in the Spanish media over the last month saying that Adebayor is at the top of Real's shopping list, but there was an interesting change in direction over the weekend when unnamed Real officials were cited as saying that his wages were too high even for them.

Is this a negotiating tactic to get Manchester City to chip in with a contribution to his wages in order to get him off their hands? In the infamous words of Francis Urquhart, "You might think that, but I couldn't possibly comment."

Struggling La Liga side Malaga, which was bought in June by Sheikh Abdullah Bin Nasser Al Thani - the first Arab owner of a Spanish professional football club - have also entered the race to sign Adebayor.

Several stories have appeared in the Spanish media saying that Malaga would be prepared to gazump Real and pay serious money for Adebayor.

In similar fashion to the way Sheikh Mansour dived into the winter transfer market six months after he bought Manchester City - when he paid a record British transfer fee for Robinho - Al Thani has taken stock for a few months and seems now set to whip out his cheque book.

Al Thani unceremoniously sacked former Porto coach Jesualdo Ferreira after a poor start to the season and brought in Mourinho's predecessor at Real, Manuel Pellegrini, in much the same way that City replaced Mark Hughes with Roberto Mancini.

Adebayor could potentially be the first of a series of big name signings by Malaga in the next six months, which could lead to them making a surprising challenge for a place in Europe next season.