Real Madrid's failure to make the Champions League final in their own Santiago Bernabeu stadium this Saturday only makes it more poignant that, almost 50 years ago to the day, they were involved in what many consider to be one of the best club matches of all time.

Real president Florentino Perez spent hundreds of millions of euros last summer with virtually the sole objective of winning a record 10th Champions League in front of the club's own fans and he is apparently still grinding his teeth at the team's failure to do any better than the last 16.

The only consolation for Perez is that their bitter rivals and this season's La Liga champions Barcelona will not be there either, having lost in the semi-final to Inter Milan.

So as Inter prepare to face Bayern Munich this weekend, let us turn the clock back half a century to a bygone era.

Real Madrid 7-3 Eintracht Frankfurt was the scoreline following 90 minutes of pulsating action at Hampden Park on 18 May, 1960, the win giving Real a fifth consecutive European Cup, a streak that has never been equalled.

The outstanding individual contributions of giants of the game like Alfredo di Stefano and Ferenc Puskas are rightly acknowledged - the pair scored all of Real's goals between them - but it was also a collective triumph for the team that has gone down as possibly the best club side in history. 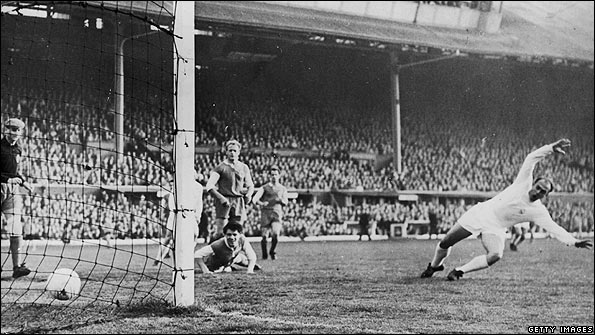 In a break from the prevailingly myopic view of football elsewhere in the world by many sections of the British media, even The Times was moved to comment: "Real Madrid, with its brilliant performance on Scottish soil, has maintained the suggestion that it is the best club in the world."

Despite four European Cup wins in the preceding four years, it was the Hampden Park triumph that finally confirmed in most people's minds that these lazy latinos, although Puskas was, of course, Hungarian, could play football.

The Daily Mail also wrote: "It's just a pity that the thousands of people at the game, and who have to return to watching Scottish football, must have thought that they were dreaming."

Among the 134,000 people who walked out stunned at what they had seen and amazed at the artistry of both sides was an 18-year-old amateur player called Alex Ferguson. I wonder what happened to him?

The black-and-white footage demonstrates that, despite some astonishing defensive lapses by the Germans (by modern standards at least), it was actually far from a one-sided affair.

Rogelio Dominguez, Real's goalkeeper, had to make several great saves from Eintracht forwards Erwin Stein and Richard Kress before Real got into the game.

In fact, Eintracht opened the scoring through Kress after 18 minutes only for Di Stefano to score twice for Real just before the half-hour and Puskas to make it 3-1 with strike from a tight angle on the stroke of half-time.

A questionable penalty after 56 minutes, for a foul by Hans Weilbacher on Francisco Gento, was converted by Puskas, who scored two more in the next 15 minutes, including a rare header, to make the score 6-1.

At this point, Real started to relax or tire. Probably both.

Stein got one back for Eintracht after 72 minutes but Di Stefano responded for his hat-trick three minutes later, before Stein nipped in to intercept a bad back pass and slot past Dominguez.

There have been other great games in recent times when serious silverware has been on the line, not least, from a British perspective, the Liverpool-Milan Champions League final in 2005. However, they did not revolutionise the thinking of coaches as much as this Real-Eintracht game. 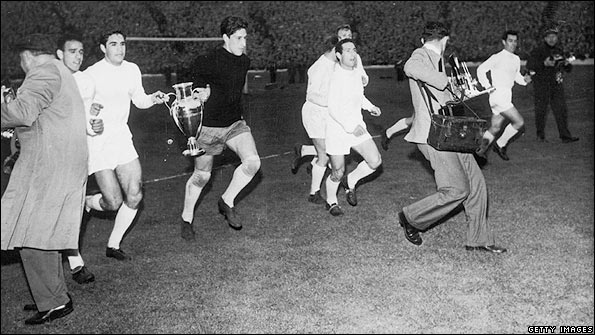 Curiously, with the Europe seemingly at their feet, it was to be the final brilliant flourish of that great Real side. The next season they won La Liga by 12 points but they were drawn against Barcelona in the last 16 of the 1961 European Cup.

An inspired Luis Suarez, still the only Spaniard ever to be the European Footballer of The Year, got both goals as Barcelona drew 2-2 in the Santiago Bernabeu before beating beat Real 2-1 in the Camp Nou to bring the curtain down on their golden era.

Real were never quite the same again. Di Stefano and Puskas got older and the rest of Europe caught up with them. They reached the European Cup final twice in the next three years but Benfica and Inter Milan had the measure of their Spnaish rivals and no side has dominated European football in the same fashion since.

Comments on this blog in the space provided. Other questions on European football to: europeanfootball@hotmail.co.uk. I don't need your full address but please put the town/city and country where you come from.

Here is one from this week's postbag, which is appropriately about a German team as Bayern Munich fans are already starting to flood into Madrid.

I was wondering what has happened to Hertha Berlin, who finished fourth last year and were relegated this season? What has gone wrong?
Richard Browne, St Andrews, Scotland

Hertha's relegation leaves Germany as the only major European football nation whose capital is not represented in their top division. You might also have seen that on Monday they appointed the former German international and Stuttgart coach Markus Babbel, who also played four years at Liverpool, so I think they will be strong candidates to go straight back up.

What went wrong this year seems to be that behind-the-scenes turmoil lead to confidence and motivation in the dressing room going downhill.

They are debt to the tune of 33 million euros, and are under pressure from their banks to reduce the players' wage bill from 30 million euros a year to about half of that amount.

Nobody knew whether they were going to get sold or even if the club was going to be wound up. The club captain and German international defender Arne Friedrich, who is likely to be going to Wolfsburg, seemed to go through the motions for much of the season in response to the problems and many players appeared to follow his lead.