Is Mourinho making a Real mistake?

Jose Mourinho and Inter Milan have answered all the questions on the pitch this season after their unprecedented treble for an Italian side, taking both the Serie A title and the Coppa Italia as well as the Champions League.

However, what happens off the pitch is now the big question looming over the head of the Special One and his men.

Mourinho infamously jumped ship from Porto to Chelsea in 2004 after winning the Champions League with the Portuguese club and didn't even celebrate the triumph with his team and fans in the Dragao.

Now, it seems that history is about to repeat itself with Real Madrid likely to be his next home despite the fact that no deal has been formally done at this moment.

On Saturday night, Mourinho slightly marred the occasion for Inter fans by not making any effort to disguise that he had probably been at the helm of the Nerazzurri for the last time.

This time, at least, it looks like he will actually return to Milan and take the plaudits of the Inter fans after bringing them their first European crown since 1965.

Even the Inter players of their back-to-back triumphs in the mid-1960s had been saying this week that the wait for their successors to arrive had been far too long for such a great club that is part of the fabric of Italian football history.

"I think everybody connected with Inter was wondering whether this day would ever come," mused Inter legend Sandro Mazzola, who played a huge part in Inter's defeats of Real Madrid and Benfica and is still a lucid commentator of all things to do with Italian football.

Now it has - and there are many people, myself included, who are still wondering why Mourinho would even contemplate leaving Inter. 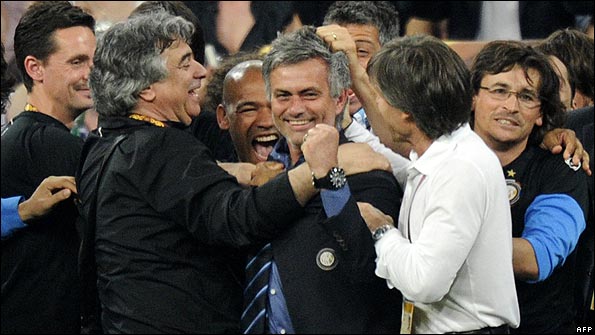 Club president Massimo Moratti has gone on the record as saying that he will provide funds to reinforce the squad.

After all, Javier Zanetti has had a fantastic season but the 36-year-old Inter captain and icon has admitted that he is unlikely to be able to perform at this level for much longer and the bench also looks in need of some refurbishment.

Moratti is prepared to tear up Mourinho's old contract, for the second summer in succession, and again make him the best paid coach in the world as Luis Felipe Scolari is not expected to be around at the Uzbek club Bunyodkur for much longer.

By contrast, Mourinho, in his often oblique way, has talked of fresh challenges.
"When I win I don't stop and here [in Italy] I have won everything. I've won the Champions League with two clubs and I can do it with three," he reflected on Saturday night.

However, from my perspective, what might also be impressive is winning two consecutive Champions Leagues with the same club.

Nobody has done it since the European Cup morphed into the Champions League in the 1992-93 season.

The last time it was done under the old format was when local rivals Milan won in 1989 and 1990 - and attempting to usurp them must surely be some sort of motivating factor.

Just what a challenge this could be can be seen by looking at how Barcelona fell just short this season, going out to Inter in the semi-finals.

The Italian media have also never really warmed to Mourinho and apparently there are other things looming in the back of his mind which he has never been specific about but which clearly trouble him.

"There are many things [in Italy] that I haven't liked and for three to four months I've been thinking of going," he added.

However, I'm at a loss to see how much different it will be in Spain if he signs for Real, who apparently have put a three-year contract worth 10m euros a year, not including bonuses and benefits, on the table.

Mourinho also now has the respect of the Inter fans, if not their complete affection, and if I was in his shoes I would stay for at least another season.

Since there are pantomime qualities to Mourinho's supposed move from Inter to Real, the famous phrase from the English stage that has sprung to my mind is 'turn again Dick Whittington'.

On Saturday night, I actually watched the game not at the Santiago Bernabeu, as I did not have a ticket, but in a bar close to the centre of Madrid.

Several Inter fans were also there, not prepared to pay the asking price of the touts outside the Bernabeu of around four to five times the face value of a ticket, so I asked a few of them what they thought was going to happen to their club next season.

Filtering out some of the euphoria, and regardless of whether Mourinho is there or not, it seems inevitable that Inter will be the main contenders for the Italian league title again after winning it for the last five times, with Roma and Milan being mentioned as their obvious rivals.

However, it was also acknowledged that without Mourinho deciding the tactics and driving the team so effectively, it will be a struggle to defend their Champions League title.

Various scenarios can be explored about who may take over from Mourinho but don't be surprised to see the likes of Giovanni Trapattoni and Scolari among the names that crop up.

At least for England fans, Fabio Capello's name is not likely to be linked too closely with the club however England fare in South Africa as he both played for and coached local rivals AC Milan.

Comments on this blog in the space provided. Other questions on European football to: europeanfootball@hotmail.co.uk. I don't need your full address but please put the town/city and country where you come from.