Is Messi the greatest ever?

The debate about Lionel Messi, in Spain and around the world, seems to have moved on in recent weeks, and the Barcelona player has gone from being a great to 'the greatest'.

Messi won every player of the year award in 2009, including Fifa's own honour, and at the start of this year looked a good long range bet to do so again, unless Wayne Rooney or Cristiano Ronaldo had hugely spectacular World Cup campaigns.

However, after his widely publicised displays just over a week ago against Stuttgart and Valencia - although his more recent performances in La Liga against Osasuna and Mallorca were a little more modest by his own high standards - there have been headlines and discussion over whether he is actually the best player of all time.

Inevitably, over the years, there have been comparisons with his compatriot Diego Maradona, although the local sentiment here is that he is culturally and emotionally as much Spanish as he is Argentine, regardless of the international shirt he wears, owing to the fact that he spent his formative years at Barca's youth training academy. 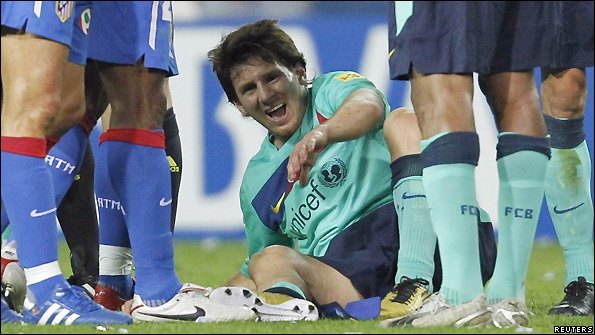 Messi has been in sparkling form this season
He was signed at the age of 13 and inducted into their academy at La Masia after the club agreed to fund his medical bills for growth hormone treatment to correct some small adolescent physical problems if he moved to Spain, bills which had been too expensive for his Argentine club, Newell's Old Boys.

Before we all get misty eyed about Barcelona's altruism, it should be pointed out that the signing of the prodigiously talented teenager meant that Barcelona also neatly sidestepped any complications with Fifa over the international transfer of an under-18 player.

In the last two weeks, however, the Messi debate has intensified, and some have claimed that not only is he better than Maradona, but also Pele, Johan Cruyff and Alfredo Di Stefano as well.

The usual point of reference is the number of titles won at such an early age with Messi now having 13 winners' medals to his name from every major European club tournament, plus the Under-20 World Cup and the Olympic Games.

Personally, I think that such comparisons are nearly always fatuous.

For every argument that suggests Messi is better than the four men he has been most frequently compared with, another can be put forward that contradicts the previous view.

Cruyff, Di Stefano, Maradona, Pele and now Messi were and are great players of their time but to compare them is inevitably a flawed task.

Unlike my other great love, athletics, where establishing supremacy is a little easier owing to the defining nature of records and head-to-head competitions, in football everything is a little more subjective and thankfully so.

Nevertheless, given his ability to excel on the highest stage - perhaps the one reason why Cristiano Ronaldo is less frequently compared with the legends mentioned above - there is huge anticipation ahead of Messi's appearance at the Emirates Stadium on Wednesday night.

It will be his first encounter with Arsenal as he didn't play a part in the 2006 Champions League final, the last time the two sides met, owing to a thigh injury sustained in an earlier round against Chelsea.

At that point he was still a teenager with abundant potential, a Hispanic version of Ryan Giggs in his early years at Manchester United.

It was the following year when he started to really get global attention and by the end of the 2006-07 season, World Soccer magazine felt it was time to put 'The magic of Messi - The unstoppable rise of football's new superstar' as the headline on the front cover of its June 2007 issue.

Since the arrival of Pep Guardiola in the summer of 2008, and the subsequent departure of Ronaldinho, the Barcelona team has been built around Messi and his mesmerising skills.

This season, combined with the mid-season slump in form by Zlatan Ibrahimovic which has meant that he has had to pick up the slack at times, he has scored more goals than ever before and his current La Liga tally of 25 sees him in contention to win the European Golden Shoe (formerly Golden Boot) award.

However, another factor behind Messi's sustained brilliance has been the influence of Guardiola's unsung sidekick Tito Vilanova, who has the modest 'technical assistant' on his business card.

Vilanova arrived with Guardiola and has been responsible for revamping Messi's physical fitness programme and nutrition and the last two seasons have seen a big reduction in the amount of injuries he has suffered.

Although every big club would love to have him, Messi looks likely to spend the foreseeable future at Barcelona - unlike the speculation focused on Ronaldo and Kaka last season and Wayne Rooney in recent months, there has never been any suggestion that he would move away from the Camp Nou.

And why should he? Apart from his obvious contentment on the pitch, he is also being highly rewarded. 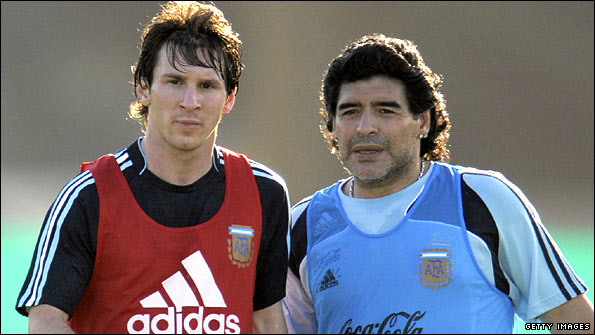 Messi has drawn comparisons with Maradona
France Football estimated that Messi earned €33 million last year, making him the highest paid player in the world, and although Ronaldo is believed to have a slightly higher base salary at Real Madrid, if Barcelona can do a La Liga and Champions League double this season then he could even top those figures this time next year.

In a world where most players are rated from one to 10, and despite the fact that he wears 10 on his back for both club and country, the football deities definitely turned it up to 11 when they made Lionel Messi.

At the age of 22, there is every chance that the knob may just get flicked round to 12 in the coming years and then the debate about whether he is 'The Greatest' may just start to have some validity.

Comments on the blog in the space provided below. Other questions on European football to europeanfootball@hotmail.co.uk. I don't need your full address but please put the town/city and country where you come from.

Questions about La Liga remain as popular as ever and, as this week's blog was all about a Barca player, I've pulled a couple of questions from the postbag about other clubs.

Q) What do you make of Sevilla sacking their coach Jimenez last week? (Yousef Teclab, London)

A) On one hand it was not unexpected, given the prevailing culture at Spanish clubs. They hadn't won in seven games and their unexpected loss to CSKA Moscow in the Champions League, at least it was unexpected to me and obviously the Sevilla directors, meant that a rationale could be provided for the sacking. Nevertheless, the lack of respect for what Manolo Jimenez had done for the club, especially in the wake of the disruptive circumstances surrounding the departure of his predecessor Juande Ramos, and the fact that they are in the Copa del Rey final means that it leaves a bad taste in my mouth.

Q) Do you think Gonzalo Higuain is a name that could come to England, what sort of club would he suit, is a decent striking option and could Real Madrid be looking to offload him after their big spending (last summer)? (Marcus Jackson, Manchester)

A) Certainly, Higuain could find a place at most, if not all, of the Premier League teams in the top half of the table. He would certainly be suited at any club that can provide him with service from the wings. For instance, the two Manchester clubs or Tottenham would potentially be a good fit. However, I don't think a move is likely now. At the start of the season there was speculation that he might go this coming summer, but his performances mean that I think it is almost certain that he will stay and that it might be Karim Benzema who could move on.