Sergio Canales, will he be another Walcott or a World Cup wonder?

There is a well-known monthly British football magazine, which I will not name to avoid further speculation that I'm in its pay, that has a column called The Boy's A Bit Special.

If they haven't done so already, and I haven't looked back more than a couple of issues, then they should consider giving some coverage to the new Spanish sensation Sergio Canales.

In case you haven't heard of him, the 18-year-old Racing Santander striker is currently the talk of Spanish football's chattering classes after he exploded onto the scene two months ago with an outstanding performance off-the-bench against Real Madrid in November. 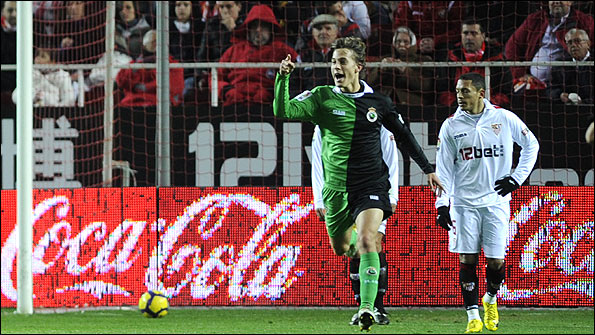 Racing Santander's Sergio Canales is a wanted man in Spain

Even though his efforts on that occasion were in a losing cause - although he did find the net against the Spanish giants only to be questionably ruled offside - spectacular goals since then against Espanyol, Sevilla and two weeks ago against Valladolid have lead to Canales being boosted, at least in the public eye, from the status of just being another prodigious youngster to a serious contender for a place in next summer's World Cup squad.

Even Spain's national coach Vicente Del Bosque has admitted that the possibility he could take him to South Africa isn't an absurd notion.

"Canales is enormously competent and his age isn't an impediment. The only problem is that the national team has an enormous depth in this position," commented Del Bosque last Friday.

If any confirmation of Canales' ability was needed, with his contract at Racing up at the end of the season and the Cantabrian club unable to meet the salary demands of his agent (who is also his father), he looks certain to sign a multi-million euro contract with Real Madrid in the coming days.

His grinning picture made the front pages of both the main Spanish sports papers on Saturday, with Marca mischievously Photoshopping on a Real jersey, relegating the departure of Ruud Van Nistelrooy to a rather desultory anecdote.

Clearly, there is a danger in lauding a player to the skies after only started a handful of La Liga games.

It's not so long ago that similar praise from all and sundry was being heaped on Barcelona's Bojan Krkic who, it's worth remembering, is still only 19.

After a sensational debut season two years ago, when he scored 10 goals, a tug-of-love developed between the then Spanish national coach Luis Aragones and his Serbian counterpart Radomir Antic, as Krkic's parents came from Serbia.

Krkic made his one and only appearance for Spain to date in September 2008, a 4-0 win over Armenia in the World Cup qualifiers, but little has been seen or heard of him in recent months as he has fallen down the pecking order at the reigning Spanish and European champions.

There will now be no place for Krkic at the World Cup, an event which has a habit of putting truly talented teenagers into the spotlight.

Few football fans, even those more reliant of Wikipedia than their memories, will not know that it was at the 1958 World Cup in Sweden when a 17-year-old Brazilian called Pele first drew global acclaim.

Manchester United's Norman Whiteside broke Pele's record as the youngest player to appear at the World Cup in 1982 in Spain - an accolade since passed onto Cameroon's Samuel Eto'o in 1998 - and, despite not quite possessing the same silky skills, he started all five of Northern Ireland's games and established his reputation as an outstanding midfielder-cum-striker.

Four years ago in Germany, the British media might still have been obsessing about Theo Walcott's idiosyncratic inclusion by Sven Goran Eriksson but the rest of the world was being thrilled by a young man wearing number 19 for Argentina, Barcelona's Lionel Messi.

The rest, as they say, is history.

If Canales does get the nod by Del Bosque, the question is: will he be another Walcott or follow in the footsteps of Messi in South Africa?

Comments on the piece in the space provided. Other questions on European football to europeanfootball@hotmail.co.uk, and I'll pick out a couple for next week. I don't need your full address but please put the town/city and country where you come from. Thanks.
I've pulled out two questions about German clubs from last week's postbag:

My question relates to the Bundesliga and in particular one of my favourite teams from the continent, SC Freiburg. Do you feel that after last season's success (promotion) and a relatively good start to the season that they can again look forward to consolidating their position in the top flight?
Alex Massey, Nottingham

In my opinion, the short and brutal answer is no, especially with their super-porous defence. They seem to have gone into some kind of slump and have picked up just two points in their last five games and lost their last three. They are now one point above the relegation zone and it's going to be a struggle form now until the end of the season for Freiburg and with their next two matches against Schalke 04 and Bayer Leverkusen, no respite appears in sight.

Why are Hertha Berlin having such a nasty season? I watched them while on a visit to Berlin a year ago, when they were in title contention, and can't fathom how they have become so bad so rapidly.
Nicholas Neveling, London

To be honest, Hertha confounded expectations and over-performed last season when they finished fourth. However, they have big financial problems. This can be seen by the fact that they didn't have the money to sign Andriy Voronin during the summer, despite his success at Hertha last season and the fact that Liverpool only apparently wanted £6 million for him.

The behind-the-scenes problems appear to have hit the players' morale from the outset. The men who also signed during the summer and expected to be key players, Christoph Janker and Artur Wichniarek have not made the expected impact either.

New coach Friedhelm Funkel seems to now have got the players more motivated after taking over from Lucien Favre in October. A much improved Hertha has notched up a win and two draws in their last four Bundesliga games but they are still a long way away from securing survival.