Steve McClaren is making the clouds go away at FC Twente.

It's worth saying quietly as he was probably the most derided England manager, possibly ever, certainly since Graham Taylor. Nonetheless, McClaren has been one of the unsung success stories in European football this season.

After taking over at Twente Enschede back in the summer of 2008 after, as the Independent put it in one of his few interviews with the English media since moving to the Netherlands, he left England under a rain cloud, he has revitalised the club from the rural Eastern part of the country.

He will be forever remembered for the damning image of him watching impotently from beneath his umbrella at Wembley as England's chances of qualifying for Euro 2008 were washed away by Croatia. 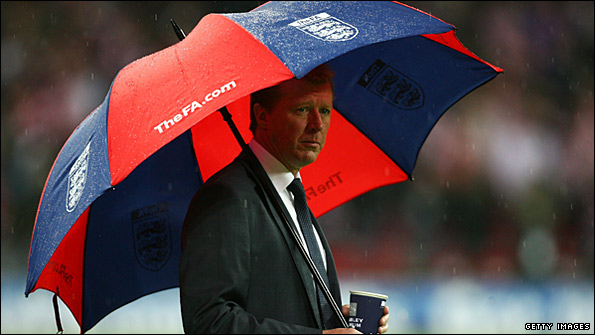 >McClaren was sacked from the England job in November 2007

But if Twente do lift the Dutch title for the first time in 83 years, he might be able to hold his head up high back home again.

Twente - or the Tukkers, as they are nicknamed - last won the Eredivisie in 1926, when they were known as Sportclub Enschede. The closest they had come to repeating that feat before McClaren's arrival was when they finished runners-up in 1974.

In his first season at the club, McClaren again took them back to second place, while they also got to the Dutch Cup final and were very unlucky to miss out on making the Champions League group stages, losing out on away goals to Sporting Lisbon.

This season, Twente are currently on top of the Dutch first division at the halfway point - as they have been from three games into the campaign - and are unbeaten in their 18 matches.

So how has McClaren done so well in the Netherlands when he was such a disappointment during his 16-month stint in the England job?

Well, there are obvious differences in scale between being the coach of one of the world's leading football nations and a club in a league that is arguably only the sixth most prestigious or powerful in Europe - after the big five of England, Spain, Italy, Germany and France.

Nevertheless, given Twente's resources, with the club historically overshadowed by the likes of Ajax, Feyenoord and PSV, McClaren has done a remarkable job, akin to his achievements at Middlesbrough, and gained huge respect in the Netherlands for his tactical astuteness.

He also realised that Twente still lacked a little creativity and firepower up front last season, despite their exploits, and managed to snatch Costa Rican international Bryan Ruiz from under the noses of Dutch champions AZ Alkmaar, as well as acquiring the Slovakian midfielder Miroslav Stoch on loan from Chelsea.

The pair have scored 13 and eight goals respectively so far this season and have arguably been the best signings in the Eredivisie this season.

Credit should also go to Twente's seemingly ageless DR Congo-born Swiss international Blaise Nkufo, who has been scoring prodigiously since he arrived at the club in 2003. The 34-year-old striker has also bagged eight goals this season.

If Twente do manage to hold off the challenge of PSV, who are also unbeaten this term, then history might subsequently be a little kinder to the man who has been cruelly dubbed "the wally with the brolly".

McClaren signed a one-year extension to his contract in October, which means he is tied to Twente until the end of next season, and has made no secret of the fact that he would like to lead them in the Champions League group stages.

However, he has also been open about wanting to make a return to the Premier League sometime soon.

And it would come as no surprise to see a club pay good money to bring him back to England this summer.

Comments on the piece in the space provided. Other questions on European football to europeanfootball@hotmail.co.uk, and I'll pick out a couple for next week. I don't need your full address but please put the town/city and country where you come from. Thanks.

I was just wondering about how TSG Hoffenheim are doing after an amazing first season. I can see them doing reasonably well being eighth in the table but has the squad changed much or anything else important? Is Europe a realistic target for them?
Lukas Roper

In the last six weeks or so, Hoffenheim have been struggling with injury problems and they now haven't won in five games. With the long winter break in Germany, that means they haven't actually got three points since their 4-0 away win at Koln in November. Europe is still a possibility if they can turn things around, but I'm pessimistic. For the 2-0 loss at Bayern Munich, Hoffenheim were missing two key players: Nigerian international striker Chinedu Obasi, who has got five goals this season but who is at the Africa Cup of Nations, and the impressive Brazilian midfielder Carlos Eduardo, who has a knee injury. In addition, Tobias Weis, Mathias Jaissle and Prince Tagoe are all also injured at the moment.

It seems as though Italian teams have lost their way a little bit over the last couple of years in Europe. Is this maybe a temporary slump in the standard or quality of Italian football, or is Italian football going down a sorry road?
Andrew Keirs Kesa

I definitely don't think that Italian football is going down a sorry road. Italian teams haven't dominated the Champions League in the last couple of years, with Spanish and English teams in the ascendancy, but these things tend to go in cycles. Remember AC Milan won in 2003 and 2007 and look as though they are starting to get into their stride once again. Inter may have not been quite as impressive in their Serie A matches in recent weeks as they were at the start of the season, but they are still a danger. The forthcoming last-16 matches, with AC Milan v Manchester United and Inter v Chelsea, could very conceivably see Italian sides assert themselves at the expense of the current top two in the Premier League. Juventus and Roma could also progress a long way in the Europa League. I wouldn't be surprised to see one of them win it, despite Juve's recent problems (see last week's blog).