The Russians are coming, well almost. After a World Cup weekend in which only a few European matches had any significance, one exception was Russia's encounter with Germany in Moscow.

Joachim Low's men emerged 1-0 winners to book their place at the finals next summer but the German coach himself acknowledged that they were fortunate to do so. "Luck played a part a couple of times... I'm sure Russia will still qualify," he said.

There were two clear-cut occasions when the Russians, who put Germany under pressure throughout much of an entertaining game, could have, and should have, had a penalty but the Swiss referee's whistle never got close to his lips.

Nevertheless, with Fifa having only recently cleared up the situation regarding the play-offs, and surely far later than they should have done, Russia will be seeded and so they avoid France, as well as probably Portugal, when the draw is made next Monday, which should give Hiddink's men a better chance of reaching South Africa. 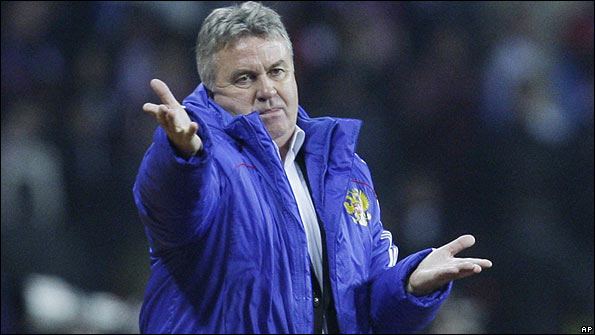 "I know enough about British football to know that I don't want to be drawn against the Republic of Ireland," said Andrey Arshavin on Monday.

"Of the rest, I think Slovenia would be the best for us. Bosnia and Slovakia are both improving teams and nobody really wants a local derby against the Ukraine," added the Arsenal striker.

Vice-versa, and assuming they do make it to next summer's finals, nobody will want to meet Russia after the revolution wrought by Guus Hiddink since he took over as coach in April 2006.

Exactly a decade ago, Russia were ranked 19th in the world, a handy outfit but no powerhouse, before things slid downhill during the first half of this decade.

Missing out on qualifying for the 2006 World Cup was the nadir and they were stuck in the low-30s of the Fifa rankings prior to Hiddink's arrival.

"What Hiddink has done with the team is incredible. He's got them believing in themselves and confident of their abilities. Before there was still a certain element of distrust between the players," leading Russian sports journalist Natalia Maryanchik told me.

And with Russian football awash with petro-roubles, there are still intangibles that don't have a price tag.

"The country now also believes in the national football team," added Maryanchik "It's a Russian trait to still be negative about many things, and have low expectations, it's a leftover from the Soviet era. That was the public feeling about the team until not so long ago but Hiddink's success, especially at Euro 2008 (where they reached the semi-finals), has changed a lot of attitudes."

Evidence of the new attention that the Russian team is getting is that Russia's president Dmitry Medvedev and prime minister Vladimir Putin were in the VIP seats on Saturday, decked out in patriotic red-white-and-blue scarves.

In South Africa, and with another eight months to work his psychological and tactical magic on the Russian team, who knows what Hiddink can achieve.

After all, in 2002 he took South Korea to the World Cup semi-finals, albeit on home soil.

The danger, of course, is what could happen if Russia fail to fulfil their potential, as they have done regularly in the past. The public backlash could be quick and brutal.

People are also looking beyond the World Cup and wondering what the peripatetic Hiddink will do next?

If all goes well next summer, large amounts of cash may keep him involved with Russian football.

He's also expected to be closely involved in Russia's bid to host the 2018 World Cup, which was formally launched last Friday, and with England as one of their main rivals.

The movers and shakers of international sports federations have become much less timid about taking big events there. The 2008 Uefa Champions League final in Moscow was generally a success and Russia will host the 2014 Winter Olympics. 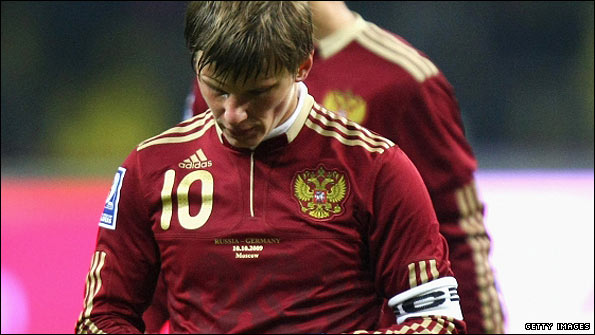 Andriy Arshavin in action for Russia

Hiddink has also made no secret of the fact that he could return to the Premier League next season after his successful, and seemingly enjoyable stint, at Chelsea.
The question would be where. How about Manchester United, if Sir Alex Ferguson decided to call it a day. Why not? Reports on Monday also suggested that Turkey want to sign him.

Curiously the one place Hiddink is unlikely to end up is Spain's La Liga. He spent time at Valencia, Real Madrid and Real Betis and was sacked by all three clubs.

His most infamous dismissal was in February 1999, after Real Madrid had beaten Racing Santander 1-0 on a damp Wednesday night in the Spanish Cup. I was at that game, and like most of the journalists there, was quietly cursing its 10 o'clock evening kick-off.

Hiddink was known to be in trouble after some poor results in the league but a victory seemed to have secured his survival for a little while longer, and the obligatory media conference just after midnight gave no hint of what was to happen.

With nearly all of us on our way home Real's infamous former president Lorenzo Sanz decided to host his own media conference with the few remaining stragglers at two o'clock in the morning, telling them that Hiddink had been given his cards.

We learnt about the news the next morning, probably around the same time that Hiddink did.

Not surprisingly, Hiddink is reputed to have no particular liking for Spanish football clubs, or their notoriously capricious presidents.

After all, Sanz had sacked his predecessor Jupp Heynckes just five days after Real had won the Champions League.