You might have thought that with Spain poised to book their ticket to South Africa on Wednesday - if they win against Estonia at home and Bosnia fail to beat Turkey - that the excitement would be reaching fever pitch.

After all, Spain is not a country usually noted for its stoic sensibilities where such matters as qualifying for the World Cup are concerned.

However, you would be wrong. Completely wrong.

Typical of the lack of interest in the game is that the Spanish Football Federation have shuffled it off to be played in provincial Merida.

Where? If you are looking at a map of the Iberian peninsula, start by looking close to the Portuguese border parallel to Lisbon.

The federation proudly told the world on Monday that the game was finally a sell-out. Well, as Merida's tiny Romano stadium only holds 15,000, usually playing host to the equivalent of Spanish fourth division games, it would have been a huge embarrassment if it wasn't.

The main point of interest has been speculation on how many goals David Villa may be able to get against the minnows from the Baltic, who currently lie 112 notches below second-placed Spain in the current Fifa rankings. 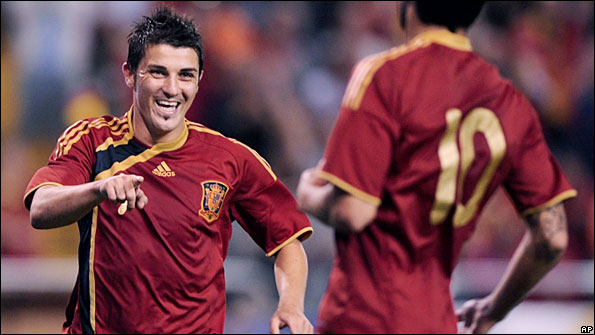 David Villa's strike rate for Spain has been impressive

The Valencia striker has found the net while in the jersey of La Roja - The Red, as the Spanish team are widely known - a phenomenal 33 times in 51 outings and he is inexorably closing in on the record of 44 goals held by Real Madrid's Raul.

Rather than rallying to the national cause though, the big issue among Spain's chattering classes remains Raul and his newly acquired chums, that €253m (£222m) experiment in conspicuous consumption embarked upon by the Real club president Florentino Perez.

The summer arrival of Cristiano Ronaldo, Kaka, Benzema as well as bit-part players in this soap opera like the former Liverpool pair of Alvaro Arbolea and Xabi Alonso continue to dominate the agenda here.

Neither of Spain's two leading daily sports papers had anything to do with the national team as their main headlines on Monday. Instead, it was all about Real Madrid yet again, just as it has been since 20 May when the construction magnate took over at the helm of the historic club for the second occasion.

Real's first serious match of the season, a 3-2 home win in La Liga over Deportivo La Coruna just over a week ago, is still being mulled over as the media at large try to work out what it means for the rest of the season.

The truth is, obviously, that nobody can know for sure.

However, here are my thoughts, which valiantly, and possibly in vain, try to encapsulate some of the more lucid opinions. 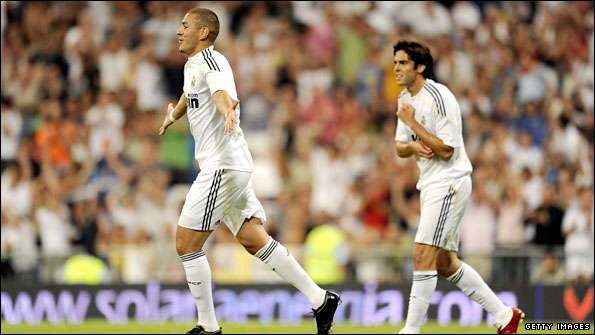 Kaka & Benzema could be a key partnership for Real

On the positive side, Kaka and Benzama look as though they have quickly built up a good working relationship, with the Brazilian roaming down the right wing. They should be a source of plenty of goals.

Xabi Alonso also appeared to be very effective when working in tandem with the former Arsenal and Portsmouth midfielder Lass Diarra, who has become a Real fans' favourite thanks to his indefatigable work rate.

On the other side of the coin, perhaps it's best to temporarily draw a veil over Real's current defensive deficiencies but the completely new back four should be expected to improve.

More worryingly for Perez, Ronaldo's performance against Deportivo, as it had been during most of the pre-season matches, was limp.

Perez, who paid Manchester United a world-record fee of £80m, must be wondering how long it will be before Ronaldo starts to justify the massive outlay.

To a certain extent, Perez's own personal prestige - with anyone who is not a hard-core Real fan sniggering their socks off - depends on Ronaldo even more than anyone else.

The next test for Perez's second generation of 'galacticos' comes this Saturday night at Espanyol.

It will be an encounter imbued with a lot of mixed emotions.

The cash-strapped Barcelona-based club will inaugurate their new stadium, finally having a place to call their own after 12 years as tenants at the city's Olympic stadium, but there will be sombre memories that Espanyol's popular former club captain Daniel Jarque will not be there to celebrate the occasion.

Jarque, who was only 26, died of a heart attack while on a pre-season tour of Italy last month. He was a close friend of several Real players, including goalkeeper Iker Casillas with whom he played in Spain's junior teams, and more than 15,000 people paid their last respects to him in the days following his death.