The undoubted eye-catcher of the opening round of the Champions League group stages is Barcelona's visit to Inter Milan.

With a cast of stars of the world game and characters like Jose Mourinho basking in the limelight, it's a game that has, as the Spanish would say, plenty of morbo about it. 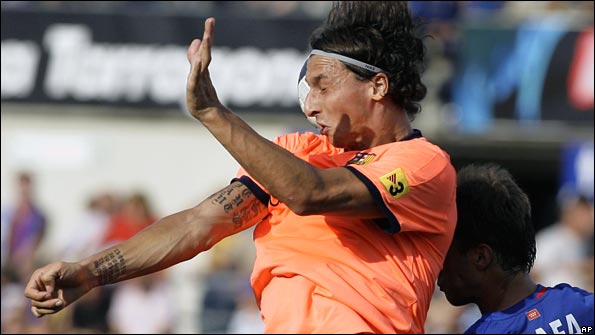 Zlatan Ibrahimovic in action for Barcelona against Getafe

As Phil Ball said in his excellent book with the same title that came out a few years ago, it's a word that entails a lot of slippery little notions that just won't rub shoulders with a convenient English synonym.

A sense of what it may entail can be grasped by just looking at El Mundo Deportivo's front page on Monday.

The Barcelona-based - and Barcelona-biased - daily sports newspaper naturally focused on the impending battle for supremacy between Barca's Zlatan Ibrahimovic and Inter's Samuel Eto'o, who swapped sides during the summer.

"Eto'o-Ibra, El Mega Duelo," trumpeted its headline. "The champion will make its debut in Milan in a clash con morbo between the two best number nines". (By the way, that's me partially translating the last sentence.)

You get the idea. This isn't a Spanish lesson but morbo in a footballing context means a game with that bit extra about it.

There's been plenty written about how both Ibrahimovic and Eto'o fell out of love with the clubs where they had been previously cherished.

Jose Mourinho and Pep Guardiola almost simultaneously decided that the time was right to get rid of their two dressing room prima donnas.

Both strikers scored for their new clubs at the weekend and have since wasted no time in telling the Spanish and Italian media about how much it would mean for them to get one over their old employers in the San Siro on Wednesday.

Then there is also the issue of Mourinho entertaining the club with whom he has had the quintessential love-hate relationship.

He spent four years at Barca in the late 1990s, starting off as a translator and coaching dogsbody for Bobby Robson and stayed on in a more formal role as an assistant coach to his successor Louis van Gaal until 2000.

In that era Mourinho was a well-liked, if slightly peripheral, figure at the club. But he managed to build up a useful network of contacts including Johan Cruyff, who remains a hugely influential figure behind the scenes, and current Barca president Joan Laporta.

Laporta at the time was an ambitious young lawyer battling against Barca's board of directors.

After winning the Portuguese double and also the Uefa Cup with Porto in 2003, Mourinho could have easily ended up back at Barca, when Frank Rijkaard hit a rocky patch during the 2003-04 season.

Winning the Champions League in 2004 continued to keep Mourinho's name in the frame whenever there was debate about who would take over from Rijkaard.

The next part of the story is well-known. Rather than hop across the Iberian peninsula, Mourinho decided to gorge himself on Roman Abramovich's largesse. 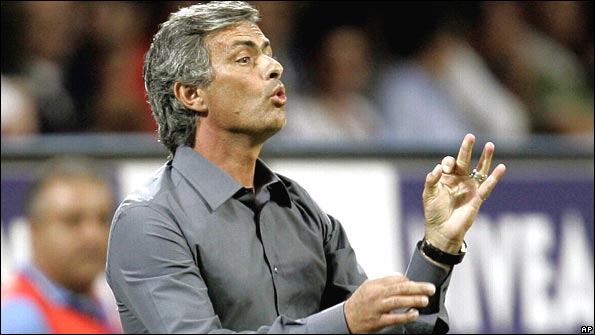 Nevertheless, there was still an enduring sense that one day Mourinho would still end up back at Barca, at least until several bad-tempered Champions League matches in 2005 and 2006.

The affection of the cules - the local name for Barcelona fans - for "The Special One" declined rapidly after Mourinho infamously decided to get up close and personal with Rijkaard.

"When I saw Rijkaard enter the referee's changing-room at half-time I couldn't believe it. When Drogba was sent off I wasn't surprised," said the then Chelsea manager after the Barca v Chelsea fixture in 2005.

The following season, Mourinho made the unforgivable mistake of publicly accusing the new Barca icon of trying to fool the referee.

"Can Messi be suspended for acting? Barcelona is a cultural city with many theatres and this boy has learned very well," said Mourinho, after his side had been beaten by Barca 2-1 at Stamford Bridge.

At the start of last season, his name still cropped up in the media as one of the contenders for the vacant Barca job.

However, his old friend Laporta decided not to further endanger his fragile relationship with the Barca fans - a vote of no confidence against him received 60% support in the summer of 2008 - opting instead for the unproven option of the Catalan born-and-bred reserve team coach Guardiola.

The gamble paid off spectacularly as Guardiola went on to do the unprecedented triplete last season and the chances of Mourinho ever being employed again at the Camp Nou now seem remote.

The current Barca reserve team coach Luis Enrique Martinez - another ex-player and local hero despite five seasons in his early career being spent at bitter rivals Real Madrid - is also being groomed to follow in the footsteps of Guardiola, leaving Mourinho looking like he'll permanently be on the outside but seemingly happy to play the role of agent provocateur-at-large to the Catalans.