Chelsea did not exactly bury bad news with a very good day at Tottenham, but behind the many unwanted headlines there is much that deserves admiration as a revolution gathers pace.

Roberto di Matteo's side arrived at White Hart Lane as Premier League leaders but, as seemingly happens with monotonous regularity, this status was not top of the Chelsea agenda.

John Terry was absent at Spurs but his presence hung over the preamble like a toxic cloud. He was starting a four-game ban for racially abusing QPR's Anton Ferdinand as chairman Bruce Buck revealed the centre-back would keep the captaincy but had been hit with the heaviest club fine ever imposed on a Chelsea player. 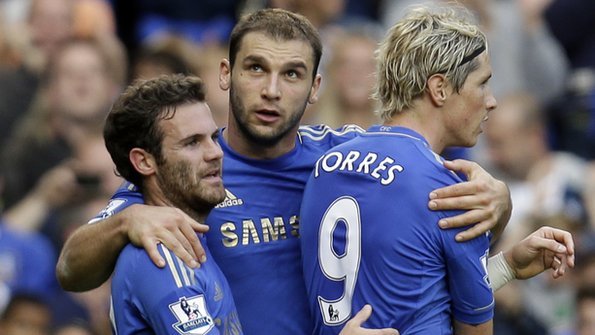 Chelsea's stylish attacking football is something their owner has craved for years. Photo: AP

Buck also publicly apologised for the suffering the incident and subsequent court case had caused the Ferdinand family, all this hard on the heels of Ashley Cole's £90,000 fine for firing Twitter abuse at the Football Association.

So it should surely be a matter of huge regret to Chelsea that these events have also overshadowed some of the most creative, attacking football they have played in a long time.

When owner Roman Abramovich sought Pep Guardiola before handing the reins to the Champions League-winning Roberto Di Matteo, he was pursuing a theory based on "Barcelona In Blue Shirts" - in other words he wanted some footballing eye candy for his money.

While it still takes a leap of the imagination to suggest Chelsea are now Barca in blue, there is no doubt this current incarnation is filled with possibilities thanks to a major shift in tactical emphasis and the introduction of personnel to suit the template.

Andre Villas-Boas was initially charged with this task at Chelsea but took on too much too soon and fell foul of a powerful dressing room that swiftly lost faith in the talented young manager's methods. He was gone in nine months.

So it was a game laced with irony in which Chelsea performed superbly, and Spurs very creditably, while Villas-Boas watched his former charges, with two very notable additions, at close quarters. It could almost have been a case of "this is what you could have had, Andre".

What he has at Spurs is promising but what Chelsea showed, even at this very early stage of the season, is they must be taken very seriously as title contenders. If one stand-out threat has emerged to Manchester City's crown in these opening exchanges, then it is Chelsea.

And there is also a growing body of evidence that suggests a serious move to the next era in this side. Frank Lampard was hardly on long enough to get grass on his boots and Terry was absent, but Chelsea still confirmed the outstanding impression they have given so far this season.

Villas-Boas was as warm in his praise for Chelsea as he was in his greeting for his former right-hand man Di Matteo, backroom staff and players like Lampard before kick-off. If there is a lingering, sour aftertaste from his time at Stamford Bridge it was not in evidence.

For this match he could also plead mitigating circumstances with the late absence of Gareth Bale after his partner went into labour and the injury that robbed Spurs of Mousa Dembele.

Nothing, however, should detract from Chelsea's ominous authority.
Gone is the grinding, give-them-nothing machine that was forged under Jose Mourinho and brought further successes under Guus Hiddink, Carlo Ancelotti and Di Matteo last season.

It insults a fine group of players to suggest they achieved this without huge measures of skill but the silverware was based on solid foundations and the occasional flourishes were added extras.

This season, with the addition of fine young talents such as Oscar and Eden Hazard alongside the superb Juan Mata, Abramovich may finally be getting to witness the flesh and blood embodiment of his somewhat fantasised football philosophy.

Their movement behind Fernando Torres was at times bewildering and all done with pace and panache, although Mata easily outshone his colleagues. They intervened fleetingly but Mata was the great manipulator, the heartbeat of this new Chelsea.

The season is in its infancy and tests such as Manchester United await next Sunday, but Di Matteo has found a shape that suits Chelsea's players and a win at Spurs to follow another impressive effort at Arsenal tells the tale.

Villas-Boas felt no compunction to hide his admiration for Oscar, Mata and Hazard, calling the trio "amazing". He talks of how they could unlock doors whereas Chelsea in previous guises might have pinched their lines from Michael Caine's "Italian Job" and just blown them off.

The lockpicker-in-chief at White Hart Lane was Mata. He came into his own when quick goals from William Gallas and Jermain Defoe turned the game around after Gary Cahill's volley thrashed Chelsea into the lead.

This was the moment to test Chelsea. Was there substance grafted on to the style? On this occasion there was, as their response was an icy calm and a ruthless touch.

Gallas, goal apart, had a horrid day and Mata swept home his poor clearance before beating the recalled Brad Friedel to add a third. He then supplied the fourth for substitute Daniel Sturridge. He could not miss and he did not.

Torres was not at his best but he did not need to be. Chelsea carry invention and menace to spare and even the best efforts of Spurs could not contain them.

The public may not grow to love Chelsea, this would be a step too far of course, but they may just find themselves secretly admiring the football they are playing. And that is a start.