Farce and ineptitude reign in Warsaw

England's World Cup qualifier with Poland was already dead in the water with U2's "Beautiful Day" ringing out in a moment bursting with irony as rain danced off a surface that resembled a swamp.

The DJ inside Warsaw's £400m national stadium may have taken his big chance to show off a neat line in black humour as the city was hit by a deluge, but credit was in short supply elsewhere on a night that endured a slow, tortuous descent into farce.

Bob Marley then crooned "We'll Be Together With A Roof Right Over Our Heads" from his classic "Is This Love?" - the twist in this little tale being that the roof that provides a spectacular adornment to this arena was not over anyone's head.

When Italian referee Gianluca Rocchi finally put this game and those waiting to watch it out of their rain-soaked misery at 10.05pm local time, Warsaw was also awash with embarrassment and anger at what had unfolded. 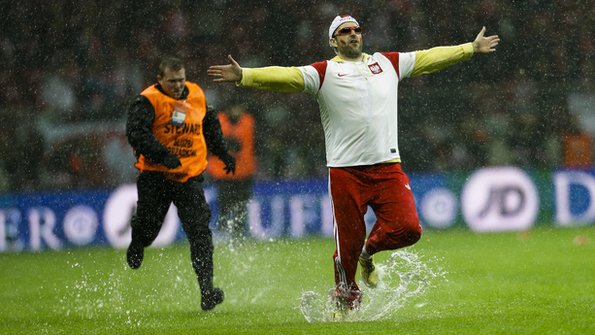 Fans resort to providing their own entertainment on a night which resembled a pantomime. Picture: AP

Warsaw was in the grip of a downpour for several hours yet no-one had seen fit to close the roof over this monument to modern sporting architecture and soon it was too late. Too much rain had fallen for the roof to be closed.

International football at elite level was supposed to be above this sort of breakdown. What was the point of having the roof if it could not be utilised in times such as this?

So thousands of Polish supporters whistled their derision when they were finally informed the game was off and 2,500 England fans who paid for the privilege of watching rain fall and must now consider the possibility of being out of pocket if they stick around for Wednesday's rearranged 16:00 BST fixture.

This was not really the point. Surely a swift glance at the weather prospects for Tuesday - and it was dank, foggy and soggy from very early afternoon - should have persuaded the Polish FA or Fifa delegate Danijel Jost to order the relevant buttons to be pressed on the roof.

Instead what we saw was an embarrassing decision-making vacuum, a strangely compelling pantomime that became more gruesome, at least in the context of the spectacle, by the minute.

Closing the roof had been discussed on Monday but the decision was taken to leave it open and trust to the weather. Unwise.

This stadium, in its own way, is a thing of beauty, with a spectacular tower hanging over the centre circle and housing huge television screens as its centrepiece. And yet it was also part of the problem.

As the rains fell, water cascaded off the giant central structure in a circle around the centre of the pitch. It was the first sign of trouble ahead.

The roof only takes 20 minutes to close but the sheer weight of water meant this could not be done. The drainage system could not cope with such a continuous downpour so a sell-out crowd of 58,000 looked to the opened heavens and an opened roof in powerless frustration.

England's goalkeepers came out to warm up but were swiftly summoned back before the body language of manager Roy Hodgson and his staff screamed a very obvious reluctance to have anything to do with this game.

What followed was almost a black comedy. Rocchi, accompanied by his assistants and the whistles of an increasingly agitated crowd, conducted an inspection which merely confirmed the pitch was unplayable.

Announcements about pitch inspections are usually the preserve of Test cricket and an utterly pointless second one taken 45 minutes after the first - when all that could be gleaned was that the surface was now 45 minutes wetter than when it was last inspected. It was an abject exercise in rank futility.

In the meantime, a pitch invader, chased by a steward who inevitably slipped into a pool of indignity, brought some light entertainment with a magnificent dive before being removed to a drier, better place.

It was as close as it got to entertainment. Indeed, Rocchi's second visit was more a glance than an inspection. One roll of the ball, one very small roll, was enough to confirm inside 30 seconds what most of us knew much earlier. All back on Wednesday.

This whole process summed up the inertia of the night. It was a decision anyone could have taken at least an hour earlier and only strung out the agony of the night for the soaked supporters.

Throughout there was not a single sighting of anyone or anything resembling groundstaff. No attempts to drain the pitch by human hand. Presumably the notion goes, 'why have groundstaff when you have a roof?' Well, the flaws in that particular theory have now been brutally exposed.

At just after midnight in Warsaw the rain had finally relented and the tarpaulin-like roof was locked into place above a surface that finally showed signs of draining. The stadium was virtually deserted and staff were on what was described as "red alert" to get ready for Wednesday's rearrangement.

More showers are forecast but with the roof in place all seems set fair, although there are now understandable fears in the England camp about the state of a surface that looked patchy even before it was subjected to a prolonged drenching throughout this miserable Tuesday.

"This is our shame", said one downcast Polish journalist as we made our way out of the stadium. Strong words - too strong - but this is a proud country and they knew plenty of eyes were on them.

We will all reassemble on Wednesday afternoon but whether the atmosphere greeting England will be as hostile as it would have been on Tuesday remains to be seen.

If there was one plus, it at least allows the game to be played with a significant historical footnote. 17 October 2012 is exactly 39 years to the day since one of Polish football's landmark moments, when goalkeeper Jan Tomaszewski kept Sir Alf Ramsey's England at bay and out of the 1974 World Cup.